Greeting new users under their first question with a comment

I often see in the comments of a question (often by a new user) the following:

Welcome to xy SE. Take a tour around ...

I always feel like I have done something wrong when I read those under my question and I'm sure others feel the same way.

Is this really a mistake on my side or should it just be a friendly greeting? If so, why? When I want to post the first question I have to take that tour anyways or at least accept some sort of information.

I've seen these comments for years on the sites I use (and moderate). They're more common on some sites than others and they tend to be posted by a relatively small group of users (sometimes only one!). From interacting with those users, in general, they are intended to be welcoming and helpful.

I often see them discussed as ways to make people feel welcome and part of the community with the hopes that they'll stick around longer and ask/answer more questions. This is a noble goal! Any site (not even only Stack Exchange) wants to retain users. Getting new users is easy but keeping them takes work, so efforts by the users to make the site stickier to users are appreciated. Unfortunately, as your experience shows, this specific solution isn't universally interpreted in a welcoming way.

When one of the sites I moderate first opened (2017), a user regularly posted a comment like those you describe on posts (both questions and answers) of new users... here's a quote of one of them:

Welcome to [site name]! I invite you to take the tour and visit our help center to learn more about the site and its guidelines. Good first post, by the way. :)

I don't remember but I do hope they restricted commenting to users who didn't have the tour badge, as that would be somewhat redundant.

At least in this example, the comment is being complimentary. To me, this makes it more welcoming and less likely to be interpreted as

Welcome to [site name]! You've messed up already, so read these help pages that I'm linking to because I can't be bothered to actually be specific about what's wrong with your post.

... which is how I'm guessing some people interpret this sort of "welcome comment". Feel free to let me know if you'd agree with my interpretation in both cases... I'm interested to know.

On other sites I've seen comments that welcome without even mentioning the tour or help center, essentially:

As a moderator and someone who very much supports the Welcoming Initiative... I think these comments are pretty much noise. Both kinds. On the sites I moderate, if they don't actually suggest specific improvements to the post I'll probably delete them if they're flagged, particularly if the user whose post it is already has the tour badge - either they had it before the comment was written and it was never needed or they've since visited the tour page and it's no longer needed.

Obviously I don't speak for all moderators in this regard. I've flagged comments like this on other sites and had those flags declined... but Interpersonal Skills has a pretty strict commenting policy and other, less chatty, sites don't.

So, while I encourage you to consider them well-meaning, that doesn't mean you're somehow wrong to feel that you've done something wrong or that you're being patronized somehow. To some extent, being welcoming for the purpose of being welcoming can feel to some people a bit fake, particularly in text when you can ascribe any "tone" to it.

I do understand (and to an extent share) your dislike of these sorts of comments. I would personally prefer that "welcoming" comments be used only in conjunction with requests for clarification or suggestions for improvement... or occasionally edit explanations. For example:

Welcome! Thanks for asking an interesting question. I've edited your formatting a bit to make it clearer for readers. Could you please explain [point A] in more detail? It seems a bit unclear as written - do you mean [rephrasing of point A]?

Now, I'm going to bet you that a group of people (possibly even you) will find my "Welcome! Thanks for asking an interesting question." either "fluffy" or "patronizing"... It's possible that how these greetings are phrased may need some optimization depending on which site they're on. I'd probably agree with that if I saw every comment from the same user on a first post worded that way. I'm not a big fan of unedited pro-forma comments because they can sound like they're written with a screwed-on smile.

But... the main problem is that there's no way to make the site sufficiently welcoming or business-like for every single user. People are different. There are billions of them on the planet from hundreds of cultures and many million of them use this network and they all fall on a very broad spectrum of interpersonal interaction needs... but they all want the same thing - an answer.

My same comment without the opening could be taken by someone who wasn't used to the network or prefers a more chatty interaction as being too terse if not somewhat rude or forceful:

I've edited your formatting a bit to make it clearer for readers. Could you please explain [point A] in more detail? It seems a bit unclear as written - do you mean [rephrasing of point A]?

Users of other sites are possibly unaware that community editing is standard operating procedures here, so would find my edit to be an overreach without some sort of permission. The last two statements can be read as criticisms, making them defensive.

This stuff is hard. So, in the end what it takes from all of us, regardless of where we sit on the spectrum, is that we consider the second rule of Stack Exchange - Be welcoming, be patient, and assume good intentions. If you're concerned about what someone means when they write a comment like this, feel free to ask them.

Thanks for the link to the help center, is there something specific I should be fixing about my post or was that just a general reminder?

If it's the former, hopefully someone will actually give you the suggestions for improvement that you need and if the latter, you'll (hopefully) feel better knowing it was meant kindly and feel well-justified in flagging it as no longer needed.

Alternately (particularly if you've already done these things) flag it with a custom moderator flag and explain to the mods that you've already followed the suggestion and would like the comment removed as it's noisy. Using a custom flag allows you to point out that you're the OP and is more likely to be validated rather than a generic no longer needed flag (mods aren't shown who flagged a comment).

I'm the OP of this post and I've already reviewed this link, so the comment is no longer necessary. Please remove it as noise. Thanks!

What hurdles you have to cross to post a first question or answer on a Stack Exchange site may depend on that site or the reputation of the user. In general, I don't think you're required to take the tour. You are shown a "how to ask box" on the Ask Question page but it's pretty uninformative and easy to ignore... as the quality of some first questions shows.

Here's the one I see on Stack Overflow, where I've never asked a question before: 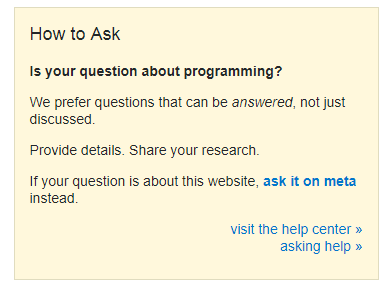 And, even when not logged in (in an Incognito Window), there's nothing between me and the Ask Question page or any additional hurdles when posting as a guest. See this screenshot from Arqade: 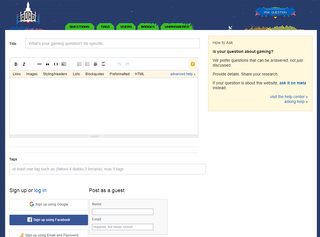 The only difference I see is that the beige formatting help banner is open automatically rather than being collapsed.

And, to be honest, a lot of time and effort has gone into (and is continuing to go into) how to inform new users before they post their first question, so maybe if those get implemented users will feel less need to link people to the tour.

I think there may be two parts to this observation.

1) Somebody without any reputation has posted a question—so they are "new" and have received a greeting.

Generally, at least so it seems to me, these greetings are only given along with some kind of admonishment about something they've done. ("Welcome. When posting here, you should be providing more detail in your questions," etc.)

I'd like to think that if new users are to be greeted, that all new users should greeted, regardless of how good their initial question is. ("Welcome! It's nice to see you starting to ask some questions here. We hope you enjoy your stay," etc.) Greeting only those who have made some kind of error seems a little like a backhanded criticism to me, rather than a genuine greeting.

If the impression is that the only time greetings are given they are given alongside a corrective statement, it's easy to see why the mention of a tour could be implying that the person has done something wrong—even if that's not true in a particular case.

Perhaps greetings could be automatically triggered and sent out by the system to everybody posting their first question? (And this could be a generic template that doesn't imply any criticism at all.) If somebody does post something that could benefit from feedback, then moderators (or others) could add something of their own in addition to that system-provided greeting.

2) The issue of mentioning a tour may or may not be warranted.

When I joined my first site, I went through the tour. But I didn't have to. I believe (I could be wrong) that I could have posted a question without having first taken the tour.

But, either way, I can see a possible issue with it. If it actually is the case that you can't post a question without taking the tour first, then it's somewhat pointless to bring it up. However, if this isn't the case, then suggesting they take a tour (if they don't have the Informed badge) could be taken the wrong way.

Not the answer you're looking for? Browse other questions tagged discussion comments new-users etiquette .