Should we rollback / improve the answer on "Database schema documentation"

I'm about to rollback the community wiki answer on

Database schema documentation for the public data dump and SEDE

It was seriously overhauled in revisions 75 and 76 but I had to do a partial patch in revision 77 because in the process we lost the PostHistory table and the editor didn't respond to our calls.

The content of that answer need to be generated based on instructions offered as editor notes, for example:

I used this XLSM Template to help generate the markdown including ToolTips: http://s000.tinyupload.com/?file_id=36027958558653296420 Make changes mostly on tab 'SEDE All Tables`, then copy cell [Q1] to Notepad to replace "" with " , then paste in here. Please help improve it! Update the link above with most recent version (maybe save old links too?)

That is where the first problem starts, that XSLM file is no longer available. Editing that answer has now become a headache, as you need to rely on external offsite resources and tooling not everyone is accustomed with.

I admit that post struggled with layout before the recent revisions but I'm not sure if these latest changes are an improvement. Personally I find it cumbersome I have to hover over the PostTypeId fields and VoteTypeId fields to see which values are available: 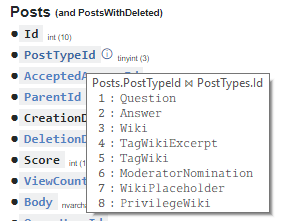 but maybe others like the tidiness of this view and the higher information density.

I realize there are only a few users editing and maintaining that answer but it gets referenced a lot (194 times on MSE but I'm sure there will be incoming links from around the network) so I rather keep the usefulness and correctness of that answer up to par.

Before I destroy value only because I dislike the editing process that is now forced on me and the layout it offers, can you share how you would like to see we go forward with that post? Answers can maybe elaborate how we can keep the high information density while only relying on tooling available to all of us.

The post in question has been rolled back to the OP's last edit.

Community Wiki's are for "everyone". Should anyone (especially high-rep users such as those involved in this convo) ever have an issue with a wiki, please do not hesitate to edit or rollback as necessary. No need to create a discussion about it.

I'd do the same for anyone else's posts, without hesitation.

(Okay I hesitated for a couple weeks before fixing one of Atwood's posts that was out-of-date, but that's different.)

There's no shortage of wikis, posts, and everything else that need attention.

I don't understand why this was posted as a question.

On the other hand, if it was to be a matter of discussion, even hinting at ill-intent, why not ask the source directly? (I'm not hard to find on SO/SE.)

I'm a newbie compared to many of you, so perhaps I'm misunderstanding:

The SEDE ad-hoc documentation was extremely messy, tough to follow, missing information and so on. I started going through and tidying. Corrections led to discovery of more inconsistencies, and I ended up dedicating a number of hours to organizing. Reviewing my edit comments will show I was had concern about others approving of the change but with no negative feedback (and so little recent traffic) the edits seemed welcome and thus, a non-issue.

2+ months later, a member (who's made his dislike of me obvious in the past) happens to notice the change and moreover who made the change, then makes an issue of it discussing it here and elsewhere, thus involving several others.

Just roll it back to your edit, and be done with it! If I (or anyone) should choose to, I can change it again* — but IMO the time wasted discussing a rarely used post could have been better spent in the review queue, or welcoming a newbie, or ... organizing a wiki any way you wish.

* Note: Now that I know how strongly a fellow community member feels about this post in particular, I'll steer clear of it. There are a few million others to keep me busy in my karma-based hobby of learning, while helping others learn on this amazing site that we are all very fond of.

Please roll that back. (I would, but now that you've started a meta discussion I don't know if I should before some resolution is reached.) The new version is much less accessible than the old one in two ways (at least):

I appreciate the intent, but the implementation has problems in addition to being harder to maintain.

361
Database schema documentation for the public data dump and SEDE