Pro tempore moderators are chosen very early, and then they almost 100% of the time remain in power until graduation, which can take several years.

Have people thought about allowing pro tem moderators to change every year or so?

I also tried asking an SE employee about it more than a month ago here: 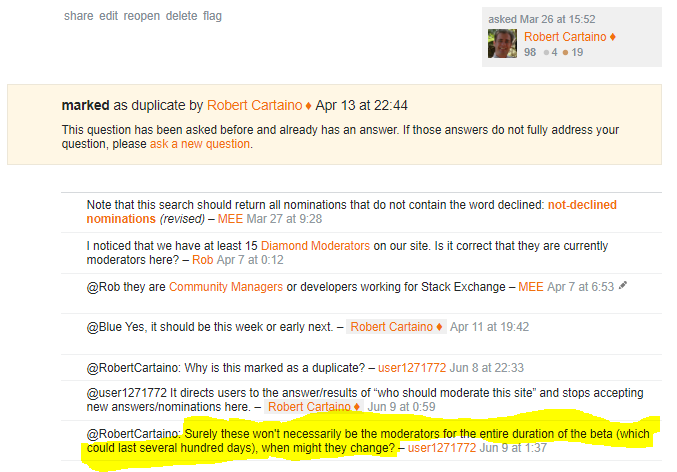 But never got an answer.

First of all, questions like these are often asked right after a confrontation with a ♦ moderator. That's a bad idea as it's a classic example of an XY problem. In these cases, a much quicker escalation procedure with more chance of success can be found at What recourse do I have if I believe a moderator has abused his/her privileges?.

I'd like to see a different group of Pro Tem moderators give it a shot. Can this be made possible?

Generally speaking, no. Recently, an election for pro-tem moderators was held on Parenting, but that happened because one of the earlier ones resigned, not because people didn't like her. It's at the moment unclear if this experiment will be repeated; meanwhile, another replacement pro-tem was appointed, not elected on Astronomy. Holding elections costs a lot of time from the Community Team (gathering questions, screening nominations, etc.); too much time to hold elections on a regular basis on all 176 Stack Exchange sites.

and it makes sense to switch them around a bit so users can decide who they like better.

You (vastly) underestimate the time it takes for a community to grow/mature and be able to support elections. Sometimes, there are not even enough candidates to hold an election! Therefore, it's better to trust the Community Team to choose good pro-tems; by looking at the scores of the nomination posts, they can take the wishes of the community into account (but will not follow them blindly).

Pro tempore moderators are chosen very early, and then they almost 100% of the time remain in power until graduation, which can take several years.

I don't have any stats on this but I'm guessing it's not nearly 100%. On one of the sites I moderate (I've been a pro-tem for two years there as of writing) it's definitely true; all three of the moderators have been the same for the full two years - but it's an extremely quiet site with very few moderation "issues". On the other site I moderate (for almost a year now), we added two moderators to flesh out the compliment to five because the starting team really needed the help.

The longer the site is around, though, and the more active (or possibly problematic) it is, the more likely it is that moderators will be either changed or added. When sites are in Beta, new moderators are chosen by the Community Team (the "CMs") and they are appointed until:

There are absolutely ways to address whether a moderator needs to be replaced for some reasons but it's pretty rare to need to force change on the moderation team. While moderation can be complex on some sites, it's very easy, rote activity on others.

I've been around for a few graduation elections and, if the current pro-tem moderators nominate themselves, they quite often win - or at least a few of them do. It's not universal. Over the time a site is in beta many very valuable and active users can gain a lot of reputation and be seen as good moderator candidates but lots of users put weight in the fact that someone has already been putting in the time and effort to moderate and already knows how to do it.

In every area of society I know, people in power change once in a while.

So, moderators are more like a police force/firefighting squad (or garbage collectors) than they are like elected officials, despite the fact that they're elected/appointed. As such - much like the police, fire, and garbage teams - we do our jobs until we get a better offer/get tired of the work... or if they fail to meet the expectations of their position, which is very rare.

Why don't we allow pro tem moderators to change every year or so?

To take your statement purely literally - we do. We allow moderators the choice to step down whenever they wish. If someone accepts the position and then gets a new job and can't put in the time, they can step down and will likely be replaced with a new face.

To get at what you're really asking... elections right now don't happen on beta sites (excluding one test election on Parenting), so moderators are chosen directly by the CMs. They're pretty busy doing a huge amount of work, so asking them to re-appoint the moderators on 95 sites every year takes their time away from other stuff, particularly when the vast majority of those sites don't need or want a change.

If we did have actual elections, know that the election process isn't automated in any way, it's a bit creaky and semi-broken and takes a lot of babysitting by a small team of 10 people (those CMs I mentioned earlier). There are over 170 sites on the network. The election process takes three weeks from start to finish... that's over ten elections running at any given time, and that's without breaks for holidays, which are always bad times to have elections.

Annual elections would mean having rolling elections going constantly across the network with (if I had to guess) very little change in the moderation teams unless you forced new moderators to be chosen by term limiting the existing ones. On top of that, the way the current election system works plays nice with awarding a few winners (1-3) but probably wouldn't do too well with much more than that. Electing the Stack Overflow moderation team of 26 people annually would be asking for trouble.

And, well... the way the current system is ... works. The moderators act as checks on each other and they're there to enforce site policy, not dictate it. If they can't uphold that policy, they may end up stepping down or being asked to do so. New policy ideas can always be suggested by any user on the site and if the users come together and agree that the policy is good, then it's up to the moderators to enact that (assuming it doesn't completely break all of the Network's rules).

Surely these won't necessarily be the moderators for the entire duration of the beta (which may last several hundred days), when might they change?

So, to answer your question to Robert, unless there's some major problem or they choose to step down, they will be the moderators for the duration of the beta (which may last several years).

I'd like to add a small note... while some sites may have no problem replacing or adding new moderators, many do. Some of the elections I've participated in, either as a nominee or voter, have had very few nominees for the number of positions available - and there have been beta sites that have closed down because no moderator candidates can be found. Forcing sites (through term limits) to change their moderation teams comes with the potential downside of running out of people who are interested in the position who haven't already been pushed out.

Periodically changing all the moderators would be disruptive for no good outcome. Moderation teams take time to grow and individual moderators take time to learn the ropes. Sites require different levels and types of moderation over the site lifetime and you want some experienced moderators on the team as the site works through those transitions. Further, beta sites in particular should be nurturing communities full of users who do most of the moderation themselves. Diamond moderators don't actually have all that much power; communities are run by the communities, after all.

But I understand the frustration; SE appoints moderators very early on before most users have even found the site, and everybody else can feel a little left out. The answer isn't to kick out perfectly-good moderation teams and restart the learning curve, though. As I wrote in this answer on the question about graduation changes, on long-running betas there should be occasional, systematic input from the community about moderation, with the SE community managers then deciding how to handle that input.

If you're asking this question because you'd like to have the opportunity to be a moderator someday, then keep using the moderation tools you do have -- reviews, flags, helpful comments, edits, votes, meta -- constructively, and when your site next needs to add a moderator you'll be in a good position. Meanwhile, you'll be doing almost everything mods can do, so you're still helping to build the site! That's a win right there. You don't need a diamond to make your community better.

If, on the other hand, you're asking this question not because of aspiration but because you don't like your current moderators, that's very different. If there is a real concern you need to raise it in an appropriate venue.

The consensus so far is that:

Therefore the solution (for now) is not to have a "fixed term" moderator appointment but an indefinite-term appointment. Instead there should be periodic discussions on the specific SE's individual Meta. The pro tempore moderators would only change if this is the consensus of the SE's community.

Not the answer you're looking for? Browse other questions tagged feature-request moderators pro-tem-moderators .

1799
What is the XY problem?
404
Graduation, site closure, and a clearer outlook on the health of SE sites
44
Help me opine about a new election system
213
What recourse do I have if I believe a moderator has abused their privileges?
198
Who is on the Community Management Team, and what do they do?

199
Avoid the Streisand Effect - be clear about the reason when suspending an account
84
Make the “past names” list public info for 30 days after changing your name
68
Could we update the “7 essential meta questions” blog post, or not link it prominently in early beta?
134
Let's set better expectations for how long beta lasts
25
Award Constable and Sheriff badges once per full year
160
Writing.SE clamours for graduation
180
Please give us an easy way to flag inappropriate ads
2457
Firing mods and forced relicensing: is Stack Exchange still interested in cooperating with the community?
2164
Stack Overflow is doing me ongoing harm; it's time to fix it!
195
Introducing the Moderator Council - and its first, pro-tempore, representatives