Does the new code of conduct still leave room for decent humor?

I've illustrated a recent answer for a more or less useless question with a little picture after the OP was asking back:

const literal versus const function as rvalue? (please check the link regarding updates vs the taken screenshot!) 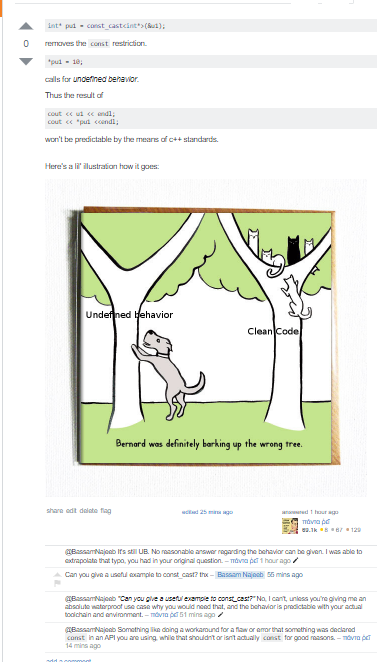 Regarding the overworked codes of conduct, would such be considered harmful, offensive or belittling in any direction?

After the OP asked back in comments, I just felt giving an illustration might just be the shortest1 and friendliest way for responding, and taking on their concerns.

TBH: In a workplace review situation I'd probably not draw that picture, it would more go like

Well even there I'd be tempted to draw that in regard of how often such is seen with the OP's code.

1)Well, it took some efforts finding the appropriate pic, load it to Gimp, and put my remarks. I still believe it was worth it, than writing a very long and elaborate paragraph.

On the other hand, I'm pretty guilty of injecting humor into posts - both organically (here) and with the occational use of memes. If humour is decent, not hurtful and on topic, sometimes it can get a pass.

I don't think anyone in particular wants to be the fun police (tm) and an omnibus rule against it sounds potentially prone to abuse.

I've personally gone for three independent sets of criteria in deciding on whether to do something similar.

TBH: In a workplace review situation I'd probably not draw that picture

And this is an important point here. For most part, I feel that informal "workplace" rules are a good baseline. Explain exactly as you would if a young padawan wanted your advice at a water fountain. The second option especially feels like it reflects the same point the image does, so much more concisely. I, for one, would paraphrase LOTR if I was explaining things to a co-worker I figured would get it.

Not the answer you're looking for? Browse other questions tagged discussion answers offensive .