Why is it called "initial revision" if it's not a revision?

Here is an example from a recent question.

This is how the edit history appears on the site:

And this is how it appears on the mobile app: 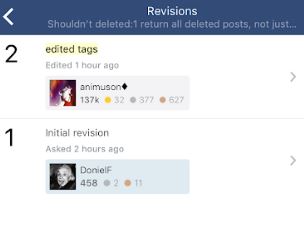 The app screenshot is from version 1.6.6.2 if that makes a difference.

There are, apparently, circumstances in which the original post is referred to as a revision even on the website itself. For instance, if someone rolls back an edit to restore the original version, the edit history displays it as "Rollback to Revision 1" as in the below screenshot (taken from this question): 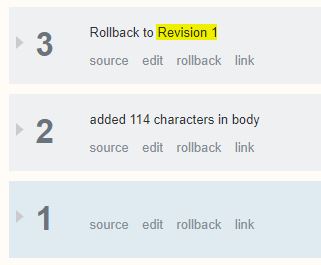 It comes from revision-control systems (also known as source control). The established vocabulary in these systems is that "revision" is a noun meaning one complete version of the thing in question. Usually that's files, but here on SE it's posts. "Revision 1" is the first version, "revision 2" is the second, and so on. There is no special term for the first version, and having one could actually be confusing. For example, these systems have commands that operate on "a revision" -- does that include #1 that's not called a "revision" or not? If all versions are treated the same way then having a common term for them makes revision-control systems easier to use, even if that term isn't intuitive for the initial version.

Why do these systems call it a "revision" rather than a "version", which would probably be more clear? Beats me, but it's common usage, so it would be more confusing if SE used "revision" differently. Remember that SE started with Stack Overflow, a site targeting expert programmers, who are people who use revision-control systems all the time. They could have instead called them all "versions" and people would have known what they meant, but they didn't, maybe because a post history is just a veneer on top of whatever revision-control system they're using under the hood.

Not the answer you're looking for? Browse other questions tagged support ios-app revisions-list .

1
Shouldn’t deleted:1 return all deleted posts, not just those of the one searching?

17
Preserve revision history on migrated questions
18
The Rollback link doesn't work on deleted posts
12
Security issues with tag wiki revision history
6
Revision history shows "edited tags" but no actual change
37
Undone edits disappear from revision history
6
Rollback option is displayed for the last edit if it is followed by another revision entry
1068
Why is Stack Overflow trying to start audio?
981
Firing Community Managers: Stack Exchange is not interested in cooperating with the community, is it?