What happens to my votes I cast when I was <15? [duplicate]

I joined SE network sites. As I am new, I have low reputation. As a part of contribution, I cast votes.

But when I cast votes, I see the following message.

Today, I gained 15 reputation on money.stackexchange. Then I cast votes and those reflected immediately; the earlier message disappeared. That means my votes are being reflected now immediately.

Looking at the message above, I was assuming that my votes are being recorded. It's just that those are not visible publicly.

When I go to my Activity section of my profile, I see following: 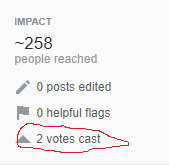 That section shows I only cast two votes. I have cast those two votes after I got 15 reputation. I do not see the vote count for those I cast before that.

57
Once I reach 15 reputation, will my old votes be taken into account?

1015
What are "Community Wiki" posts?
833
What does "user was removed" mean and why did my reputation change because of it?
57
Once I reach 15 reputation, will my old votes be taken into account?
970
Firing Community Managers: Stack Exchange is not interested in cooperating with the community, is it?