While edit the post, in the "preview mode" the hyperlinks are displaying without an underline. So I hope, it is a bug.

The issue can be reproduced in recent Google Chrome and Mozilla Firefox browsers.

When inspect the element for the hyperlinks, the text-decoration: underline is applied for the post and comment's <a tag. That caused an underline issue.

Update: As Floern mentioned in the comments, the tag link in the posts are also have an underline. 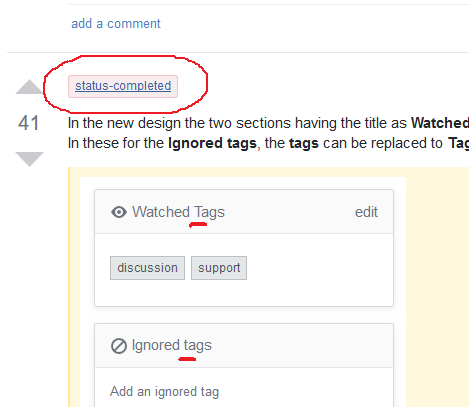 It strikes me that this problem might be SO-specific, and I realize SO is just one site among many—but it's a pretty important one.

One most SE sites, from SciFi to Super User, there just aren't a lot of inline links. Some, like MSO and MSE, have a lot more links, but they tend to come in bulleted lists, which actually look great with the underlines.

But on SO, inline links are a lot more common. And they're often used to provide a link to reference docs that the reader probably won't need, but might.

The way the site has looked for the last 9 years, linking a code name or a few short words gave you exactly the right level of visible-but-not-intrusive that you're looking for. Now, the underlines jump out as if they were the most important thing in the answer. Look at this example from David C. Rankin:

With the old style, the first thing I noticed were int main(void) and int main(int argc, char **argv).

With the new style, the first thing I notice is a link to the C11 standard. Which does, admittedly, give that information, but it's off-site, and not exactly novice-friendly.

It's also now impossible to tell .DS_Store and .DS Store apart. There's already a question about that specific problem on MSO.

While we're at it… From Aaron Sheckley's answer:

We've intentionally added underlines to links in posts and comments for contrast and accessibility reasons. Many of our themes' primary colors don't deviate much from the text color itself, so we went with the classic way of showing a link's a link.

We're in the midst of a well announced theme change across the network.

So, I understand, you're retheming everything, and the new themes don't offer sufficient opportunities for contrast. In fact, I can see that on the MSO page I linked above:

But I don't think underlining is the right answer.

When we redesigned the car's dashboard to be slate on grey, we couldn't read the speedometer anymore. So we made it blink.

Sure, now you can see your speed more easily, but it's also distracting you from more important things, like the traffic through the windshield. And the right answer is obviously to scrap the slate-on-grey design and come up with something that actually allows for contrast to be used as a visual cue, isn't it?

As pointed out by poke and others, there are other sites that do tend to use lots of inline links in a way similar to many StackOverflow answers. Poke suggested Wikipedia, but I think an even better example is WikiWikiWeb, the original wiki, which was focused on programming-related topics (originally specifically on "design patterns"). At any rate, both of them default to hover-only underlines plus an easily-visible color contrast (in the default theme, they follow the standard color scheme of blue for unvisited links, purple for visited links, which contrasts nicely with black for non-links on their white background). You can look at ancient versions of the c2 wiki on the Wayback Machine, when they did underline links, and the underlines are distracting.

For comparison, here's the Wikipedia page on Design Patterns:

… vs. the original version of the c2 page before they stopped underlining links:

This change creates more issues with underlined code (besides those mentioned in this answer), as mixed code/normal text looks like two separate links.

For example:
"In Java, objects default to null"

Here null looks like it points to something totally separate than "default to", as there's a break in the underline.

Removing underlines from code as suggested here would only exacerbate this issue, but it looks pretty bad as it is.

The change was obviously motivated by a desire to make hyperlinks more obvious:

Whatever alternative solution is proposed, it should probably address these points to be acceptable.

For the uniformity, in both places the underline for the hyperlinks expected to be same.

In post's comments section (with underline):

In Activity -> responses -> comments section (with out underline):

This is not a bug. It is intended behavior. We've intentionally added underlines to links in posts and comments for contrast and accessibility reasons. Many of our themes' primary colors don't deviate much from the text color itself, so we went with the classic way of showing a link's a link.

Tags shouldn’t take an underline, nor should previews. Those will fixed in follow-up commits. As you can likely tell, our CSS is very much considered legacy code and it can be hard to capture all the edge cases in a single go 😂.

Not the answer you're looking for? Browse other questions tagged support bug status-bydesign design hyperlinks .

800
Recent feature changes to Stack Exchange
-12
Rollout of new network site themes
101
'Favorite Tags' is now 'Tag Watching'
123
Responsive Design Themes - What can sites customize and how can they get changes implemented?
107
Are we creating divisions in our quest to make new users welcome?
38
Make links in Stack Overflow answers more obvious?
6
Data Explorer query to get my post with specific tag
8
Underlining of hyperlinks doesn't extend to private moderator messages
5
What's the reason to make link in the spam post bold?
5
Remove the underline on links to duplicate targets on duplicate closures
See more linked questions