In Let's hold language in comments to the same standard as posts, the SE team talked about how comments can influence the overall perception of the site:

To casual visitors, question comments are more visible than answers. We know from talking to people who don't contribute that one reason is because they see discouraging comments on the site. In sum, leaving a negative comment on a bad question:

If someone lands on a question, all they see at first is the question itself and a whole bunch of comments on the question. For any question with more than a handful of comments, all of the answers are hidden below the fold: 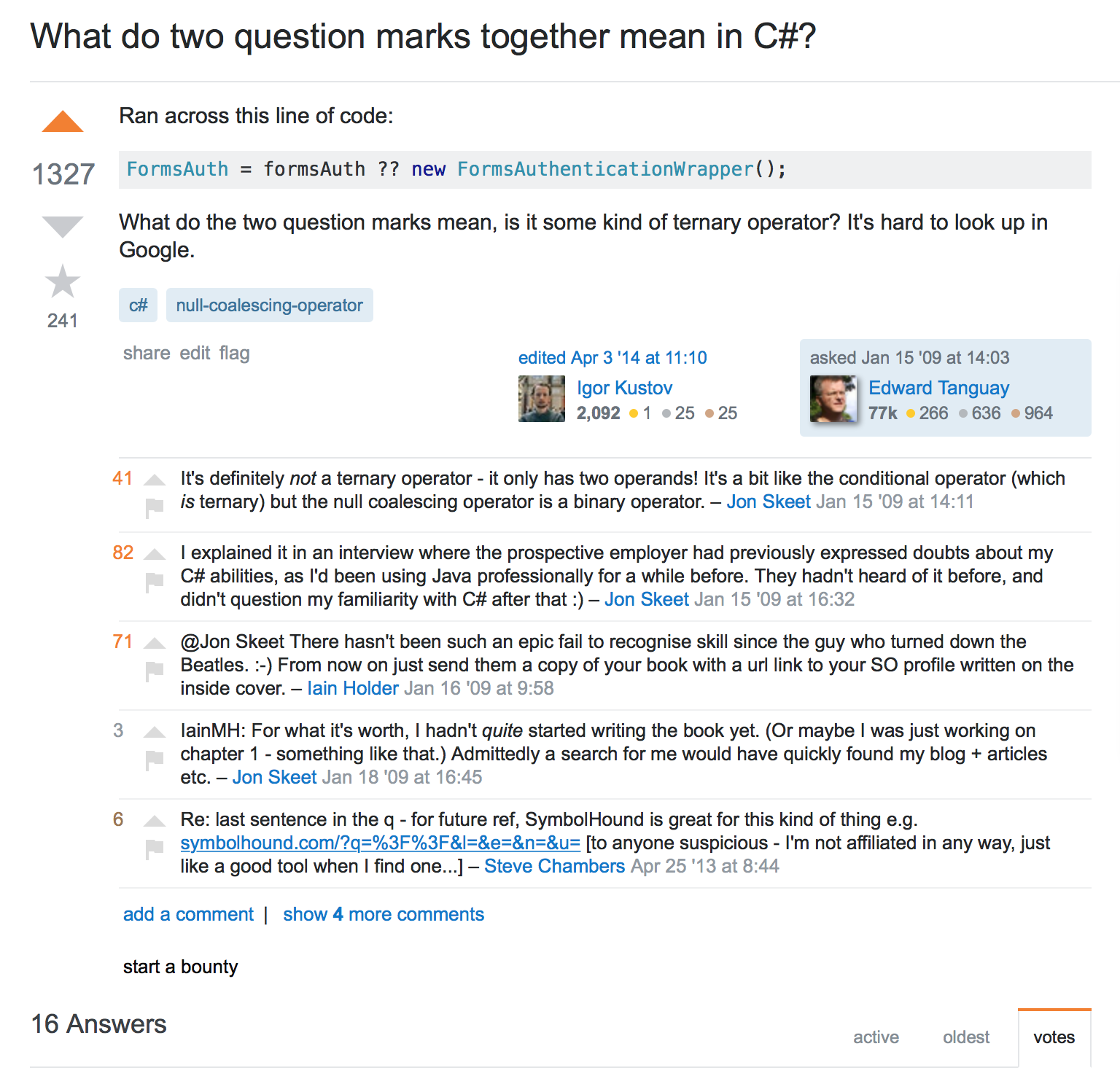 This example isn't negative, but it is largely irrelevant to the solutions.

While comments on an answer are generally informative (especially the "don't do this!" variety), comments on a question are usually directed at the question author or are only useful to the immediate audience (e.g. "possible duplicate"). Once the question has been around for a while, most of these comments lose their value. It's unlikely you'll get traction from a duplicate/review comment a year later, you'll probably need to flag for that.

So why don't we restore some emphasis to the answers?

Once a question is 30 days old (or other number picked from a hat), collapse the comments on the question post by default. This will bring answers back to the visible section of the page, so our random visitors from the internet hop right into the Q&A. People still interested in the question's comments can click the "show comments" link. Answer comments would not be hidden.

Something similar was proposed almost five years ago in an attempt to trim down the visibility of less-critical comments, and in light of the recent changes to the site, I think it might be worth revisiting.

At the time, there were some concerns about burying useful signal with such a broad change, but I think the situation is a little different now, especially when scoped down to question comments:

Somebody visiting months or years after the question was posted won't be able to help here. Anecdotally, most of the C# questions I land on from Google are over five years old, so the answerers either got what they wanted or are never going to.

These are usually found on answers and wouldn't be affected by this proposal.

This one may have some relevance, but I think in this situation the question would now just be closed as "too broad".

However, I would add on two more that do give me a little concern:

Personally I agree with the crowd that wants to discourage answers in comments because you can't downvote or edit them when necessary, but I concede that does nothing about the decade of comment-answers already on the site.

I've seen the "X/Y" arguments go either way, but links to documentation or other resources could be useful.

Overall, I think this change could result in a net benefit by sweeping obsolete or unnecessary discussion under the rug. Once posted, many questions get hundreds or thousands of views over their lifetime, often long after the post was created. For these future viewers, we can keep the focus of the page on the Q&A and not on the criticisms of the question or question author (which are already reflected in the question score and answers/lack of answers), nor the discussions that aren't relevant to the anonymous internet reader.

Collapsing both question and answer comments either always or a few hours/days later would emphasize the (lost) idea that comments are temporary and subject to deletion (or moving to chat).

It would remove the soapbox from which noise and approximately (in my experience) > 50% helpful, well meaning, and 'Thanks, great question/answer' comments gain their audience. Reducing the view 'to the world' and emphasizing that 'it better count' to whomever this is directed at would make people think: should I comment and how to make it truly worthy.

Collapsing them all to anyone whom is not the OP (question asker), answerer, or @'ed would give the webpage the intended appearance (after the Flags kick in, and votes are accumulated) - "Best Questions" and "Best Answers" (rise to the top) - other users not involved with the comments would have to click to see them.

That goes a bit further than your suggestion, for the same reasoning, and not as far as: Automatic comment deletion based on time on the main sites .

0
Hide most comments on "old" Stack Overflow posts
265
Let's hold language in comments to the same standard as posts
136
Hide trivial comments
37
Automatically hide old comments
21
Shouldn't the "English only" policy be mentioned in the FAQ?
-13
Automatic comment deletion based on time on the main sites