Immediately rebanned after flag ban was lifted; should I wait to flag again?

I recently got automatically flag-banned on my Worldbuilding account. When I regained the ability to flag, I flagged another post that I had intended to flag but been unable to because of the ban. That flag was within 24 hours of the ban being lifted, probably within the hour because I was on the site at the time and happened to notice. The flag was accepted as helpful, but the system promptly banned me once again. Now that the ban has once again ended, I am hesitant to flag anything. Will I get banned once again? If so, how long do I have to wait?

I don't have anything specific in mind to flag, but it would help to know whether to leave anything I see as needing flagging to someone else so that I don't get banned again. Getting banned would be a lot less helpful than skipping one post and being able to flag more than one post later on.

The majority of my flags have been helpful, with almost all of the declined ones for off-topic or moderator attention. I do not try to spam the review queues and my flags are well intentioned and usually helpful. I am fairly sure that both bans were because of the system because I flagged more posts than normal in a short amount of time.

Here is a screenshot of my recent flag history. This is not a complete list. To the right, you will see my flag count: 13 post flags, 8 helpful, 5 declined; 3 comment flags, all 3 helpful. 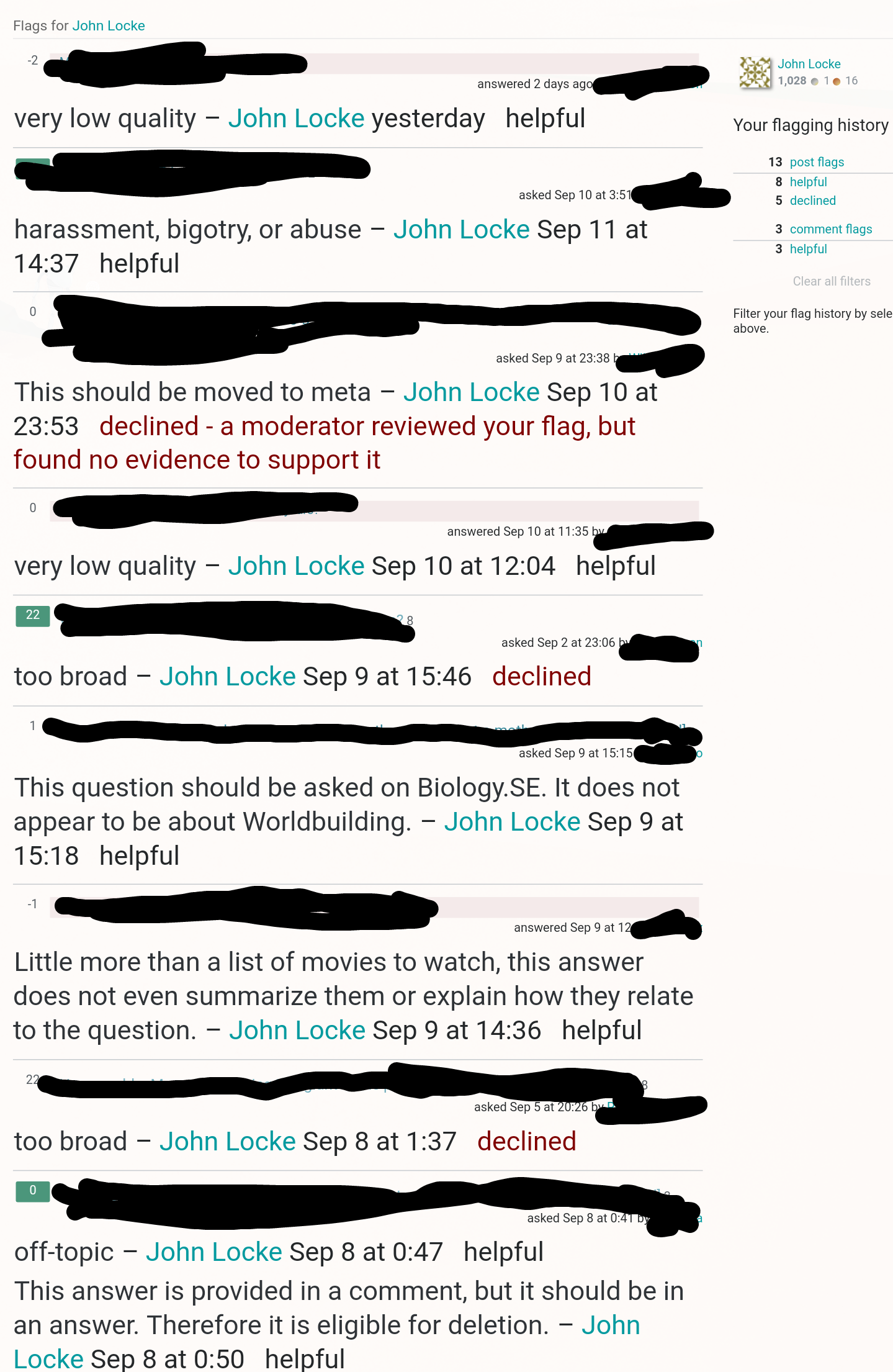 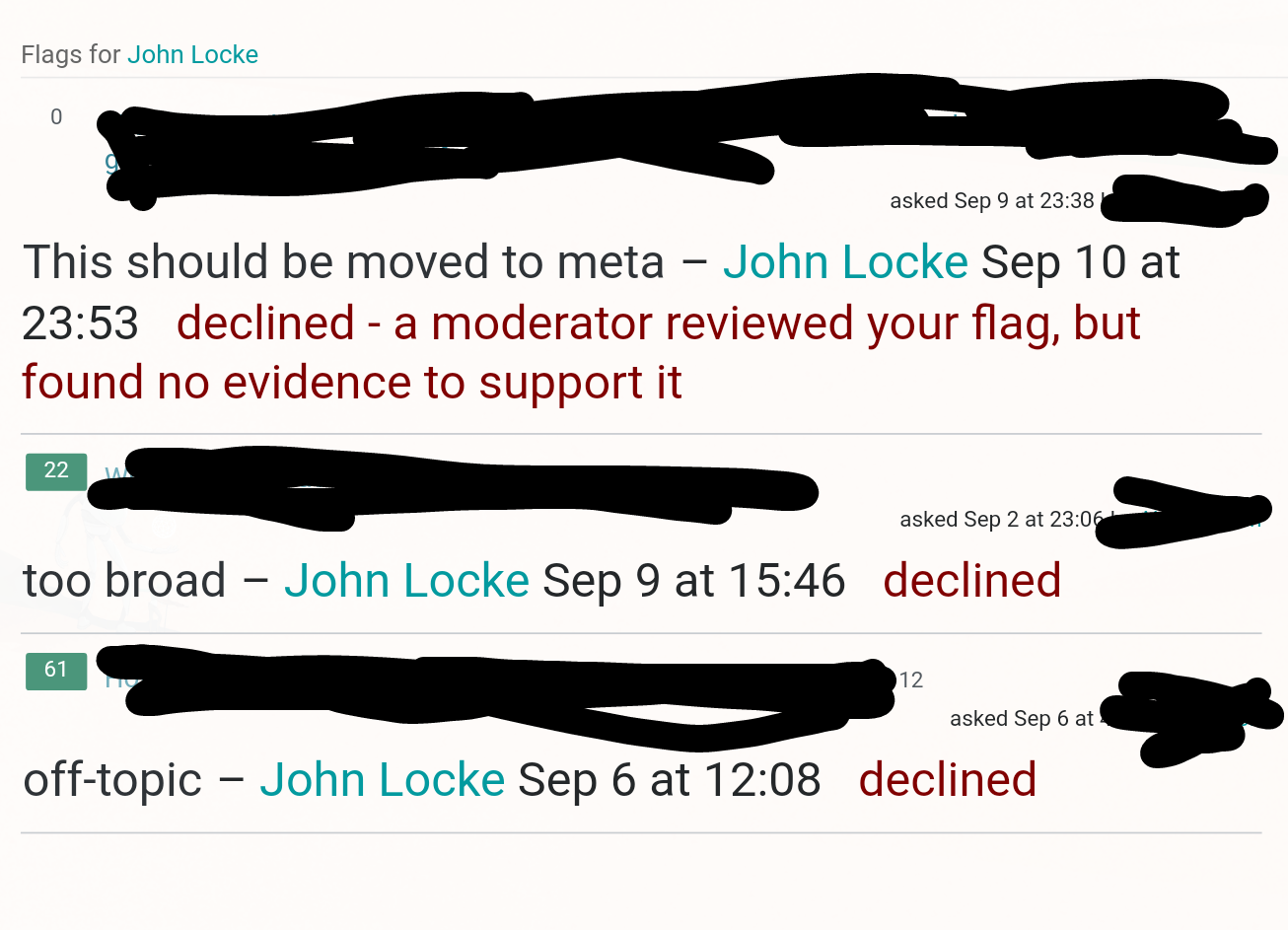 Ah, yes, the flag ban formula is subject to a lot of unfortunate edge cases.

Basically, it considers the handling time of your flags, rather than the time you flagged. All post flags that were handled within the last seven days are considered for a potential ban.

That's not ideal to a user who wants to know about their progress towards a flag ban, as one's own flag history is sorted in order of flagging time, and there's no way to sort it in order of handling time. (If you're already banned from flagging, you can view flags that were declined in the last seven days, but that doesn't give you any information about those flags in proportion to your overall flags handled within the last 7 days.)

The flag ban algorithm works like this, and it's calculated on the fly whenever you attempt to flag a post: if you have at least 10 post flags that were handled within the last seven days, and 25% or more of those handled flags were dismissed as declined, you're banned. If fewer than 10 flags of yours were handled in the last seven days, you're not banned, regardless of the proportion of those which were declined.

What happened here is that you were banned because a large number of your past flags were marked declined, causing you to be banned. Then, you noticed that your ban was lifted because the handling time of one of your past flags became more than seven days ago, causing the number of your flags handled within the past seven days to drop to 9, lifting the ban. Then, you cast another flag, then as soon as that one was dismissed as helpful, it became 10 again, and since (your post flags declined in last 7 days) / (your post flags handled within the last 7 days) was still more than 25%, you were banned again.

To answer your question, if you want to prevent an immediate re-ban after being banned, caused by a helpful flag, I'd suggest waiting a couple more days for some of your past flags' handling time to become more than seven days ago. But if the proportion of your declined flags is so high, such that you risk getting re-banned for a helpful flag, I'd look into your flag history and make changes to your flagging patterns, because apparently you need to improve them.

Not the answer you're looking for? Browse other questions tagged support flag-ban .

164
Allow recovery from flag hellban
47
Guaranteed flag-ban after a series of helpful flags
13
Do disputed flags count towards a flag-ban?
21
Add a link to the relevant Meta post in the flag ban notice
313
Was the retroactive change to CC BY-SA 4.0 approved by Stack Exchange's lawyers?
4
Warn users when they are about to hit the "guaranteed" flag ban