Wildcard tags can no longer be watched or ignored

While editing my watched tags list on RPG.SE, I received an unexpected error message saying that "gm does not exist on this site".

The reason why the error was so surprising was that I never had gm on my watched tags list in the first place (and no, I wasn't trying to add it, either). What I did, however, have among my watched tags was the wildcard gm-*, which would match any of the several tags on the site beginning with "gm-". However, now (after adding a completely unrelated tag to the list) it was gone, and trying to add it back just yielded the same error message.

A little more testing revealed that this issue affects all SE sites, and that it does not actually depend on whether the "base" tag exists; rather, the SE software simply strips away the wildcard (and the hyphen) from all tags when editing the watched tags list.

For example, trying to add java* to my watched tags on SO (because I like both Java and JavaScript, of course) just resulted in java being added instead. Also, trying to add *script (because I also really like all scripting languages) just yields the error "script does not exist on this site". And trying to narrow it down to just j*script yields the even stranger error "j script does not exist on this site" (yes, with a space in the "nonexistent" tag name!): 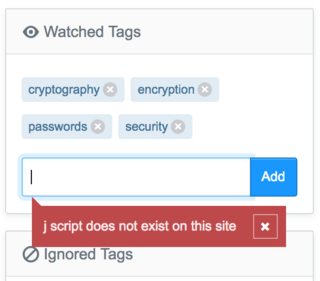 Anyway, watching or ignoring wildcard tags used to work, so this is a regression, and I haven't been able to find any statement that it would be intentional.

I suspect this regression occurred as a side effect of the changes to favorite tags a few months ago, but none of the answers in that thread mention it, and it's been long enough since that announcement that it's better to report this as a separate bug.

Of course, as a work-around, I can just manually expand the wildcard and add all the matching tags to the list. But in some cases (e.g. language tags with lots of version-specific variants, like, say, c#-*.* on SO) this can get pretty awkward, especially since the automatic dropdown shows only a limited number of matches.

Ps. An easy way to reproduce this bug is to try to watch (or ignore) the wildcard tag status-* here on meta. Currently, all you get is an error messages saying that "status does not exist on this site".

My bad - I switched the Watch/Ignore code to use a different tag input sanitization method that supported synonyms and claimed that it supported wildcards, but in fact did not. :)

That's fixed now, so you should be able to use wildcards in watched and ignored tags.

Not the answer you're looking for? Browse other questions tagged bug status-completed tags ignored-tags tag-watching .

62
Ability to sort/reorder interesting/ignored tags in sidebar
46
What do “watched tags” and “ignored tags” do?
7
'Interesting' and 'Ignored' Wildcard Tags Should Recognize Synonyms
303
The future of meta.stackoverflow and meta.stackexchange
258
A real solution to ambiguous tags
101
'Favorite Tags' is now 'Tag Watching'
715
Dear Stack Exchange: a statement and a letter from your moderators
579
We're switching to CommonMark