I think there should be a markdown counting of suggestion limit, like how many I applied and how many I've left. Or is it already there and I didn't get it yet?

It's not a good idea to suggest several edits in a brief space of time.

Let's say you edit 15 posts within 15 minutes, automatically your edits enter the review system where two (or three) users have to approve each one.

Well, if someone sees the same user's name popping up, and if the edits do nothing to improve those posts they might start rejecting the other edits. The opposite is true if the edits are pertinent, useful, suggest significant changes without being invasive, and generally help improve the legibility. When that happens, users will trust your suggestions and approve them more quickly.

and this It's been more than 10 days, Am I permanently banned for suggesting edits?

I believe six or more rejected edits in a row triggers an automatic ban from suggesting further edits by the system. P.S. I looked for what that specific number was but didn't find one. In any case, you'll want to know before your account is banned whether an edit of yours has been rejected. Read the reason/s why it was rejected and try not to make the same mistake.

To read the reasons visit Profile, click on Activity, then go to the responses tab. Select suggestions where you'll see which edits were approved and which were rejected.

To summarise, take it slow because low-quality, trivial, well-meaning but ungrammatical edits will always be rejected in the review queue.

A much faster way to gain rep is to answer a question.

The easiest way to currently do this is to go to your profile:

and count how many pending edits you have: 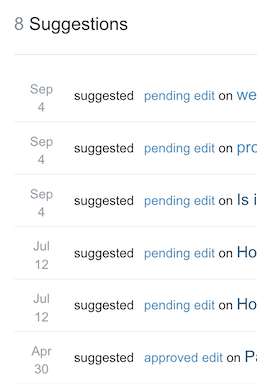 before you ask: this is indeed a screenshot made today

Subtract this number from 5 (20 if you're on a beta site), and you have your desired result. Beta sites can be recognized by the word 'Beta' next to their name in the title under the navigation bar (though there are a few exceptions).

Agreed, it can be useful indeed.

I suggest the following mockup:

i.e. show the amount you suggested and the limit besides the edit link itself, in brackets. When the amount suggested reach the limit, have it red and unclickable.

Not the answer you're looking for? Browse other questions tagged feature-request edits suggested-edits .

119
Rate limit suggested edits
304
Moderators should be able to manually ban users from suggesting edits
67
Too many of your edits were rejected, try again in 7 days
11
It's been more than 10 days, Am I permanently banned for suggesting edits?

542
How about a "Vote not to close" option to counter the "Vote to close"?
1205
Encouraging people to explain downvotes
296
How do suggested edits work?
445
Reward finding duplicate questions - +10, +2, -5
384
Send authors an inbox message if their question is closed
416
Decision on rejected edits should be displayed as a notification to the editor
1240
Don't throw away all votes when a user is deleted
157
Don't show pending suggested edits to me after I run out of votes
119
Rate limit suggested edits