Several times a day, people make clearly off-topic posts on MSE. And I've noticed something of a trend with these posts.

Obviously, people vote-to-close them as off-topic. But they also get downvoted heavily. The thing I noticed is that... they don't usually get deleted. Or at least, not nearly as quickly as they get closed. A question closed in minutes will often linger on for hours or even half-a-day before finally getting the 3rd delete vote.

Yes, far more people have close-voting powers than deletion powers. But I think there is an additional reason for this disparity: people with delete powers don't see those questions.

When a question is sufficiently downvoted, it no longer appears on the front page. That is good, in that it removes bad things from the front page. But, that also means that the only way to find that question is to look at the Questions page. And that page is simply not as frequently visited as the main page.

As such, I think we would deal with these questions more effectively and efficiently if they weren't downvoted. Yes, they're bad, but that means they need to be gotten rid of. And getting rid of them requires visibility, which downvoting inhibits.

If I was an inexperienced asker and if I had my question deleted at small negative score I would think that possibly I just accidentally caught an eye of some overly strict moderator and maybe it makes sense to try my luck and ask again.

(no, I wouldn't count close voters in that obscure banner and no, I wouldn't check boring help center. Nor would I trust comments explaining something complicated about topics because these look like just personal opinion of an occasional passer by)

Large negative score would help me understand that really many people don't want me asking over here.

Things would probably be different if there was efficient guidance about question quality and topicality or safety roadblocks for confused askers. But in the absence of these downvotes could do the job about as well.

The real problem is not whether users should heavily downvote off-topic question but how the site can avoid seeing this in the future. 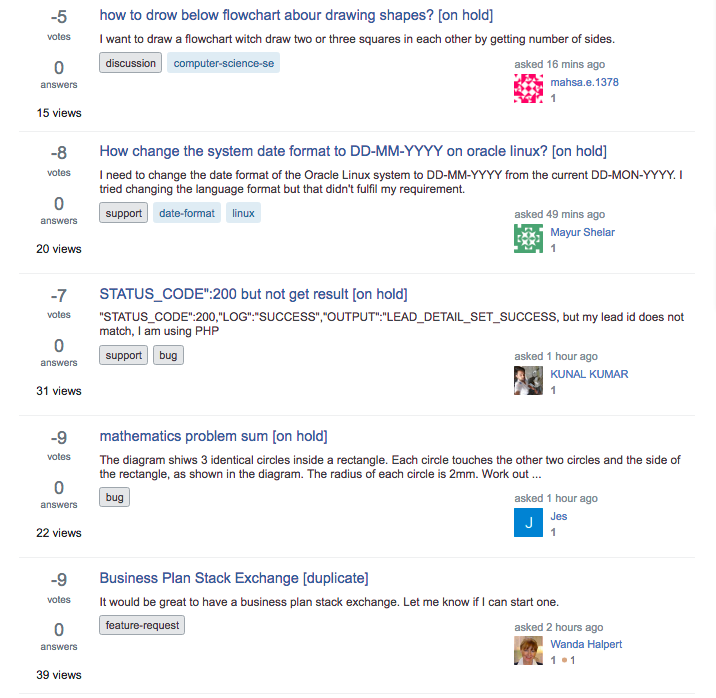 I am confident that these posts, with the exception of the duplicate request, will be deleted swiftly.

But the real discussion should focus on whether MSE users should spend time posting suggestions, and canned instructions in the comments when it should be easy enough for the system to verify if a new contributor has one or more accounts on SE, has already posted an identical question on a different site earlier and whether he or she is an active member of a different site.

For users who deliberately cross-post the same identical question on MSE, and/or have been an active and regular member of any SE site for at least 6 months, perhaps the best deterrent is an immediate suspension on MSE, lasting approximately one week.

Not the answer you're looking for? Browse other questions tagged discussion down-votes meta deleted-questions .

166
What are the effective communication channels for effecting change to SE?
42
Ways to give users some specific education about question quality and topicality
42
Meta sites' front pages should not hide questions with very low scores
40
People get lost and crash into meta - maybe we need roadblocks for their safety
45
What is the cause of the recent increase in blatantly off-topic posts on Meta?
-14
Do not show questions with off topic votes in Top Questions on meta

1065
Should 'Hi', 'thanks', taglines, and salutations be removed from posts?
259
Closing changes: [on hold], unclear, too broad, opinion-based, off-topic reasons, bye-bye to Too Localized
80
Should one downvote answers to off-topic questions?
705
Your answer is in another castle: when is an answer not an answer?
404
Graduation, site closure, and a clearer outlook on the health of SE sites
2779
A Terms of Service update restricting companies that scrape your profile information without your permission
415
Can a machine be taught to flag spam automatically?
485
Congratulations to our 29 oldest beta sites - They're now no longer beta!