Ask Question
Asked 12 years, 6 months ago
Modified 4 years, 2 months ago
Viewed 1k times
19
This question was closed because it could no longer be reproduced. It is not currently accepting answers.

I can't help but wonder what has happen to TheTXI lately. Has he been put on demanding project that has taken all his free time? He hasn't responded to anything on meta since Nov 6, on SU Oct 9, SO Nov 4, etc. We miss his sly helpful answers on meta and his blunt to the point SU responses, and those ever so useful SO posts. Has Diago done such an awesome job that he doesn't need to do much to SU lately? The dude has gone into silence and used to comment/answer all the time. He has so much rep, he didn't even move spots in the top users of meta. When will TheTXI return?

EDIT: Whoever has his email or contact with him should send him a link to this question. Does he respond to his contact info in his meta profile?

I don't know, he hasn't even responded to recent moderator-related emails, either.

Nothing urgent, mind you, but the lack of response was odd.. guess he's busy!

Now this is getting serious. I can't get any response to emails on multiple email addresses, and these are his "last-seen" dates:

This is a bit of a problem, since TheTXI is a moderator on Super User and he hasn't been seen once there in two full months.

Ah, finally got a response. Seems work is in permanent lockdown mode, and there's lots of "stuff" going on at home. Glad he's OK at least! He agrees that we should transfer his mod to someone else who has more time to work with it.

We need someone who is actively participating on SU on a daily basis. Ivo was one of the runner ups in the SU moderator election, and he is an active participant to this day on SU. Effective immediately, I am transferring TheTXI's moderator status to Ivo.

He's in IRC. Let me see if he's at his keyboard. Just upvote me a lot in anticipation.

<TheTXI> "the general ledger of this application needs to work perfectly by January 1st, so I'll probably need you to put in extra hours this month"
<TheTXI> whenever my boss does this I get the sudden urge to start looking for other jobs

This answer is like that movie Memento. Remember that? The main character sure doesn't! [rimshot] 16:15 ADT:

This is in reply to Mike Hudson saying:

<whodey> ever bid on something and then look closer and really start to hope you'll get outbid?

Most of his earlier stuff around noon ADT is like this:

It's things like this that make me really hate that guy.

He's not replying to my hailing signals from a few minutes ago (Inferno is me):

<Inferno> Hey, the TXI
<Inferno> Where you at?
<Inferno> I take it you're not here.
<Inferno> The guys are looking for you: We miss TheTXI!

Notice that I use punctuation. TXI never does that. I hate that guy.

This is #somafia on irc.slashnet.org, by the way. It's where cool people like Welbog idle. Today is the first time I've sent something to that channel in like two weeks. Though usually when I do type stuff it's along the lines of "Jeff Atwood sure is silly" but with better vocabularity. "Vocabularity" is a portmanteau of the words "vocabulary" and "vulgarity".

I don't know who that guy was, but I sure showed him! I continue to lie in wait for TXI sightings at least for an hour or so before I go to sleep.

Still nothing. No TXI sightings in sight. I swore a bunch in IRC, though. That's activity. I'm not going to paste it here. If you want to see my vocabularity you can just log into Wave or IRC your lazy self.

The replicon TXIs have vacated the channel. Still no sign of the real deal, so I'm going to call it a night. See you [expletive delete] later. 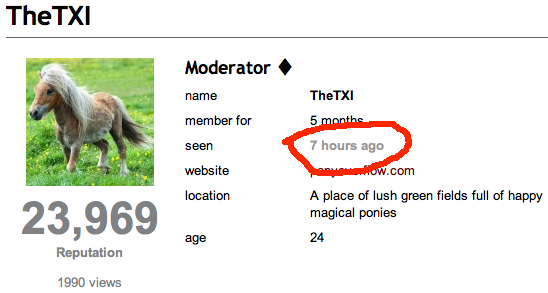 Has he been put out to pasture? He couldn't have gone to glue as he would still stick around...

He was abducted by aliens disguised as ponies... who could resist?

Not the answer you're looking for? Browse other questions tagged discussion support fun .

58
Nominations: New Stack Overflow Moderator
4
Why do the gravatars get blocked?

4
Where did [advertising-inquiry] go? I miss it so much
0
Migrated questions that got closed miss the close message
6
Loads of comments still miss intended recipient
7
Do questions that get re-tagged as bug miss out on some queue?
8
Reopen Votes - Do I miss something? "STOP! Look and Listen."
12
iOS beta testers, we miss you
4
Why do some [untagged] tags miss an excerpt?