Not notified of a rollback to one of my own posts

I was notified that someone edited one of my questions earlier today (because it changed more than 6 characters). Then someone else rolled back that edit and I didn't get a notification so my inbox looks the same: 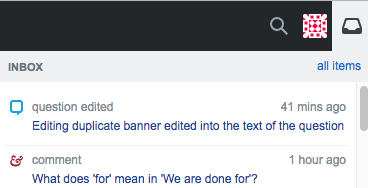 The timestamp corresponds to the edit, not the rollback. The link goes to the revision history, which of course lists both, but I visited it before the rollback, so that didn't help me learn about the additional activity.

In this case the edit didn't really improve anything, so it wasn't a big deal that it got rolled back. But most edits that are made to my posts are good, and I'm often OK accepting suggested edits that I would reject were it someone else's post (for deviating too much from the author's intent). And then there's edits I make to my own stuff. I would want to know if any of that was rolled back.

It's nice to think that other people will be watching the watchdogs so to speak, but ultimately I'm the one responsible for my posts, since upvotes/downvotes on them affect only me. A lot of stuff slips through the cracks.

(Additionally it would also make sense for followers to be notified because they should get the same notifications as the OP.)

Rollbacks are pretty rare, so I think that adding this wouldn't add too much noise.

Shouldn't "substantial" rollbacks cause a notification?

49
What events trigger an inbox notification?
20
Notification when your edit has been rolled back

1060
Should 'Hi', 'thanks', taglines, and salutations be removed from posts?
705
How do I get attention for one of my own questions without a good answer?
1001
What are “Community Wiki” posts?
424
What is a 'rollback'?
32
Auto rollback any edits made by a spammer when his account get nuked
355
Reject an already-approved suggested edit when rolling it back
6
Ability to enter a message on rollback
295
How do we encourage edits to obsolete/out of date answers?