I was making a post on the gamedev meta and after I posted it I noticed that between the Header and the image I first uploaded there was a trailing [ and I went to edit the post and remove it, only... 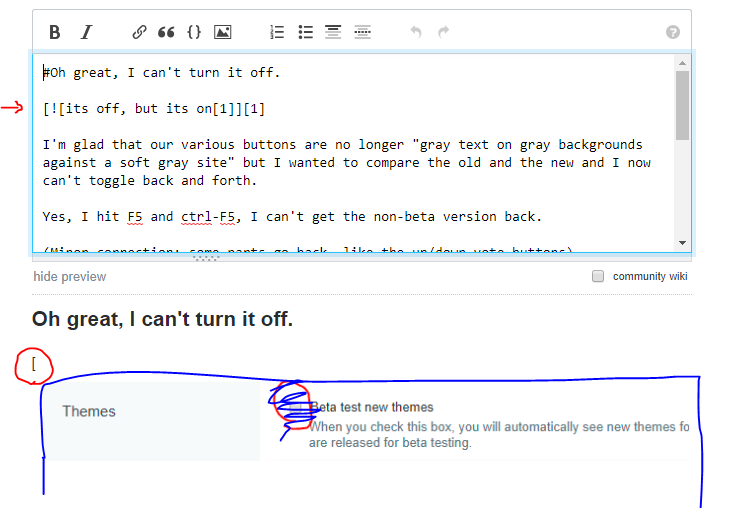 ...it doesn't actually exist, except as part of the image embed markup.

As noted in the comments, you're missing a ] before the first [1] (which you presumably deleted by mistake).

![text][number] is an inline image.

Putting the two together (by replacing the "text" part of the link with an image, to make an image with a link) gives you [![text][number]][number].

In your case, apart from the extra [, this would mean the image isn't also a link, as the text of the image is text[number] instead of just text, and the last [number] is consumed for the image, and is thus not available to make a link.

You can also use the alternative form [text](url) in any of the 3 cases above (although in the last case that would require the URL appearing twice rather than just having it once with 2 references to it).

Not the answer you're looking for? Browse other questions tagged support markdown uploader .

19
My Stack Overflow imgur images are disappearing
1
Fix the duplicated markup for embedded images
7
Uploaded animated GIFs suddenly lose animation
23
Image size limit: Why it is set to 2 MB?
583
We're switching to CommonMark
19
Why does the new editor change all the link references to inline?