If my comment is flagged “Unfriendly or unkind” how do I know?

I've found these questions that seem related but they're old from a lot before the code of conduct update. I'm not sure they answer my question?

But knowing your comments are being negatively seen is important even if comments are second class. If my comment was taken wrong, I want to know right when its flagged so I could try wording differently.

We don't systematically tell you when your comments have been flagged - at all for any flag type - and there's no way to know why a comment was removed without asking or even that it was removed without revisiting the post it was on. You can't even see your own comments that were removed, as you can with deleted posts.

As a side note, there are two flag reasons that relate to negatively received comments. While we give flaggers two different options, they're treated the same by the system. I refer to these two reasons as "harassment" and "unfriendly". 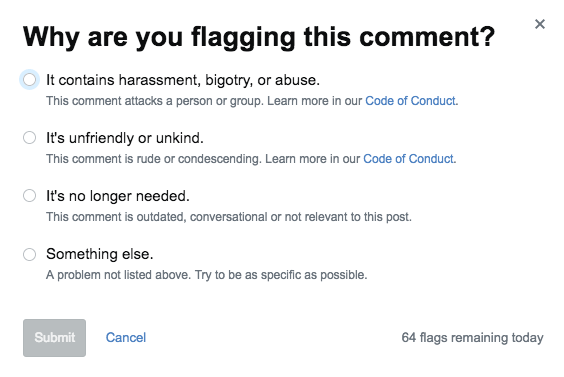 The only time that a user is made aware of their comments being flagged is if a moderator feels that the comments crossed a line and they needed to send a moderator message or possibly issue a suspension. In many cases, the message sent won't specifically state the content of the comments, though users can always ask for more details in a response to the message.

Right now, we're going through a lot of changes for the network, realizing that we need to help users be more welcoming and encourage them to consider how they're interacting with other users on the network. Giving users a place to review their flagged comments would be a step in the right direction.

I think it makes sense for us to consider a "my flagged comments" counterpart to the "flag summary" page. If you're not aware of the flag summary page, that's not surprising to me as it's easy to miss - you can find it on your own profile in the "Impact" box: 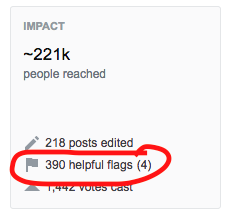 This link will take you to a summary page that lists all of the flags you've raised on posts (if you haven't raised any, there won't be a link). This page lets you sort your flags by type and review if they were marked helpful or not. 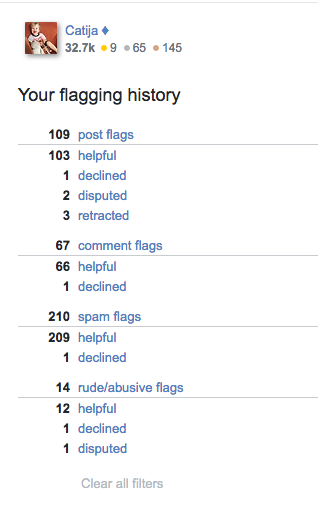 Proposing a "My Flagged Comments" Page

I've been thinking for a while that it makes sense to let users see when they have content that's been removed for being harassment or unfriendly. How can we hope for improvement if users don't know where they've gone wrong? Many comments are deleted due to flags - either by moderators or sufficient user flags - and most of the time no other action is taken other than removing the comment, so users often don't know that their comment was flagged and removed.

In many cases, this is OK. I'm not really interested in sending a notification to every user who has a single comment deleted as a result of a flag. Some sites have many (hundreds of) comments deleted on a daily basis, most of them are "no longer needed", not harassment or unfriendly.

That said, there's a big difference between notifying users for every comment and giving them a place to review the comments that have been flagged and removed - if any. Right now, we alert moderators when a user has three or more comments deleted within a week for being harassment or unfriendly. We could use this alert - or a similar one - to also notify the user in such a case and link them to this page - which would also appear on their profile somewhere. So, no alert for every deleted or flagged comment but yes for a recent high frequency of flagged comments.

Now, if we were going to let users see a list of their comments that were flagged, we'd probably want to be considerate of what we show. There are a few options for this but at a minimum what I suggest is

We should show a user:

We should not show:

We could consider the following:

This page would be accessible only by the user themselves and the moderators of that site.

Do I have concerns with showing this content to users - sure. I think there are possibly some users who will use this page to argue about their content being moderated and whether it was actually rude or not. In general, I think these users are the minority and I trust the judgement of our moderators and their ability to support their decisions.

I think it's really valuable to empower our users to see where they're going wrong and improve. It's much easier for a user to see where they went wrong if they can see what they wrote and review it. I've seen many questions on Metas that read "I wrote a comment that was deleted and it said something like _____ - Why was it deleted?" Often, the version of the comment they remember is much less unfriendly than the actual comment they wrote. A page like this would make it easy to review those comments without needing the help of a moderator.

If the user can see the text of the comment and still doesn't understand why it was deleted, they can go to the child Meta of the site and ask with the actual comment text in hand, making it possible to get feedback from any of the users on the site, not only the moderators.

So, if we find some time to rework some of the moderation tools - which we generally need to do - this is something I think would be nice to implement, in some form.

TL;DR: you can't know, but it also depends on severity.

Usually the moderator handling the flags will just remove the comment(s) and move on. In those cases, the authors of the removed comments can't have any way to know their comments were removed, unless they somehow notice they disappeared. There is also no penalty to anyone in those cases.

However, in severe cases e.g. outright being rude to others, the moderator will send official warning to the comment author in the form of private moderator message, which cause two things:

In those cases the moderator might also suspend, but I think they usually warn first.

Bottom line: while you can't really tell if your comments are/were flagged, it's all about self review. Go over old comments of yours, see how they look like, try to put yourself instead of the person you commented to. Usually this works, and you can see if you're seen as unfriendly or not. :)

Generally, there's no way to know, just like with flags on your posts. It's also possible that a user flags your comment even though it is not unfriendly or unkind at all. If your comments are repeatedly (and justly) flagged as unfriendly/unkind, chances are the moderator team will send you a (private) message asking you to adjust your behaviour.

In general, if you try to adhere to the Code of Conduct, you should be safe. A single 'unintendedly' unfriendly or unkind comment will not cause you any problems.

A comment being flagged as "Unfriendly or unkind" is one thing, being notified that it is "deleted" is another.

I would say that probably the most common reason for comments being "deleted" are that they are simply "no longer needed". Comments are often used to seek clarification on the question or query points in an answer - once these changes have been made then the comment is obsolete. Comments that stray off-topic are also not needed. I frequently flag "clarification type" comments on old questions because they are "no longer needed".

Sometimes mods will delete whole comment threads that have strayed off-topic or are no longer relevant to the post they are attached to.

Being notified of comment "deletions" could potentially create way too much noise.

Not the answer you're looking for? Browse other questions tagged discussion comments comment-flags code-of-conduct .

30
Comment deletion notification
2
Can we delete comments efficiently without causing legitimate mental issues for their authors?
5
I'd like to be able to see “Unfriendly” flags lodged against me
6
Notify user when their comment is removed

1113
Encouraging people to explain downvotes
1393
Fastest Gun in the West Problem
308
Don't remove the @ part of my comment
214
Allow flagging a comment after upvoting it
2756
A Terms of Service update restricting companies that scrape your profile information without your permission
822
Net Neutrality and Stack Overflow / Stack Exchange
259
Let's hold language in comments to the same standard as posts
87
Updated comment flagging - Supporting the new Code of Conduct
2290
Firing mods and forced relicensing: is Stack Exchange still interested in cooperating with the community?
1906
Stack Overflow is doing me ongoing harm; it's time to fix it!