This was a point raised in a micro-study performed by ArtOfCode, but is even more relevant now because of the recent removal of an entire site from Hot Network Questions for...known reasons.

To quote a part of the study results (emphasis mine):

HNQ was one of the most confusing features mentioned. On a page full of questions about gardening, looking at the sidebar and seeing questions about Star Wars and Windows 10 next to each other confused my test group. Some sample reactions:

Aren't those questions off topic here?

Why are these questions here with the gardening questions?

From what I can tell, this played a rather large part in provoking the original tweet that resulted in the site's removal: a visitor saw links to questions about personal relationships on a site that was supposedly focused only on programming.

When I began my first foray into teaching older, middle- and high-school kids, the first course offered at my university for students in that particular track involved teaching kids as young as first grade. The reason they did so was that you can't assume that those older children have the same level of general knowledge as yourself: the fact that you start off teaching kids who are totally new to reading, math, or science helps demonstrate that perfectly.

Similarly, you can't assume that someone who isn't familiar with Stack Exchange shares the same background knowledge, or is aware that the term "network" refers to the overall Stack Exchange network of Q&A sites (or in the case of readers of Stack Overflow or other sites not hosted on a stackexchange.com domain, know that that site is a part of it).

For this reason, I propose that the title of "Hot Network Questions" be changed to something that makes it clear to users unfamiliar with the SE network, such as "Hot on the Stack Exchange Network", "From the Stack Exchange Network", or per Monica Cellio's suggestion, "From our other sites". Either one of these titles would directly address the middle two issues mentioned earlier, and a user who looks just a little further will probably get their answer to the first and last issues.

From our other sites conveys the meaning more clearly, is no longer than "Hot Network Questions", doesn't rely on obscure jargon, and leaves room to someday reform how questions get onto the list (i.e. curation rather than the current algorithm). It tells the reader that Stack Overflow has other sites, and the selection of questions shows that they're rather different from SO.

People should be less surprised by questions about fictional inhabitants of Mars, or people trying to deflect unwanted flirting, with clearer labelling.

Comments have objected to this suggestion, saying that the words "hot" and "network" are clear to people who understand English. That's not the point. There is a space between "know how a dictionary would define" and "understand in context". Stack Overflow gets tons of visitors (mainly via Google) who are not aware that there are other sites. In the context of the SO front page, "network sites" is not very meaningful to these visitors. If it were, we wouldn't get so many questions like "why am I seeing stuff about {religion, relationships, politics, etc} on a site about programming?". "Network sites" is insider knowledge, but we need to reach outsiders too. The phrase "our other sites" conveys clearly what we mean. No, it doesn't have as much sales-pitch "zing" as "hot network questions", but if we have to choose between clarity and zing, I favor clarity.

I disagree. The whole point of that sidebar widget is to give something short and simple.

Changing the short and catchy "Hot Network Questions" to something like "Questions from around Stack Exchange, the network of sites" makes is both not short and not simple to understand. People new to SE won't understand what Stack Exchange means either, hence this defeat the whole purpose of the feature.

I can't see any good way to change it. IMO, it's let it be as it is now, or just remove it altogether. 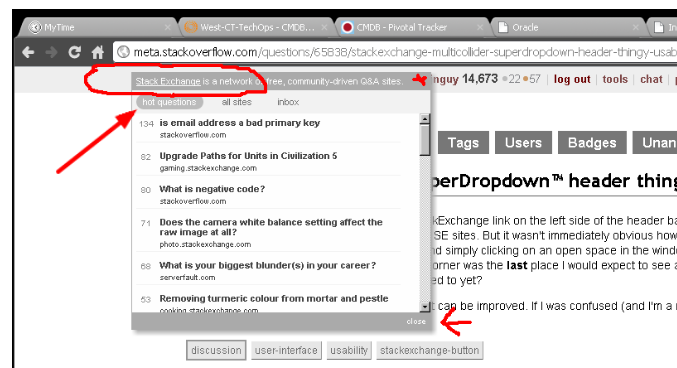 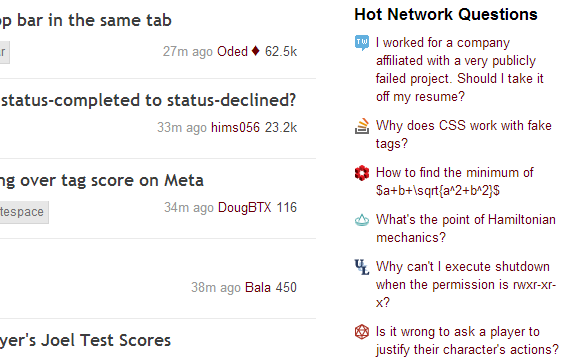 Today the title Hot Network Questions is composed of three words and 19 letters. Generally speaking, the title is reasonably short and easy to understand but it is clunky-sounding and not the easiest of phrases to say. The use of the term hot, whose meaning most non-native speakers are familiar with, is quite clever for several reasons. Its primary meaning is one of "heat" and "high temperature" but it also means (especially of news) "fresh", "up-to-date", "most recent" as in hot off the press, "trending", "passionate" as in to have a vivid interest in something, as well as "popular".

So, I'm not sure it is absolutely necessary to replace "hot", it's been part of Stack Overflow and Stack Exchange for over ten years but if we wanted to reduce ambiguity, "top" could fit the bill. Top also means to be in the highest position, rank or level. If something is "top" it suggests it is the best of something. At school, students receive top grades and achieve top results.

In fact, Stack Exchange uses the expression "Top Questions" on every one of its sites. So why not for the network?

Like hot, top is another three-letter word, and it will give you a title with the same number of words and letters as the original. And for some reason, it seems to be easier to say aloud.
Initialism: TNQ

It is comprehensive, and unambiguous but it's too long… this exemplifies Shadow Wizard's criticism.

Acronym: COSESMPAQ virtually impossible to memorize but if we take PAQ, which is very reminiscent of FAQ, we get

It's two letters fewer than the original title. It's a twist on the very recognizable initialism Q&A but it could also be interpreted as Popular Asked Questions, and it has the no small advantage of being easy to abbreviate.
Acronym: PAQ

However, while browsing the archives of MSE I came across the following piece of information posted over four years ago
What is the Goal of "Hot Network Questions"?
The author says

The goal of the hot questions should be to drive traffic to general-interest questions. After all, the Hot Network Questions used to be more accurately named as "Popular Questions".

This might explain why the term “popular” will probably be rejected, it's been used before and it was changed to “hot”. Jiminy Cricket, someone could have warned me!

Which leaves me with the following suggestions

The first two titles are comprehensible, commonly known, and above all, snappy. The last one is more complete and replaces "network" with the actual name of the site.
Initialisms: TQ&As, NQ&A, and HSEQ.

If the OP wants to convince the SE team to change the name "Hot Network Questions" to something less obtuse, they will need to propose a shorter and catchier name than From the Stack Exchange Network (5 words and 27 letters) or From our other sites (4 words and 18 letters).

Not the answer you're looking for? Browse other questions tagged feature-request new-users hot-questions .

111
What is the Goal of "Hot Network Questions"?
75
What kinds of question titles put a site's HNQ presence at risk?
180
Usability issues for first-time Stack Exchange users - a micro-study
41
New top bar quick reference guide / Where has the link to <X> gone?