Stack Lab: My vision for Area 51 - Introducing a community project

Note: This is not an official Stack Exchange post.

I have changed some aspects and addressed some concerns. Please read the post again if you have read it previously.

TL;DR: I propose that community members develop an open-source alternative for Area 51 that will eventually be used by Stack Exchange. But please read the full post.

Area 51 is the site where new Stack Exchange communities try to get enough momentum in order to create a working site. The current mechanism has been acknowledged by Stack Exchange’s own Community managers to be flawed for over six years now:

Area 51 has been churning out progressively weaker sites [...] about a third of which fail in private beta.

There were plans to create a new site (called "Area 52") with a different process. But no major changes to Area 51 except for a drastically reduced time needed to pass a proposal have been done.

Whilst previously succeeded one proposal every month (approximation), noonly one proposal has made it to beta for almost a year now. The failure component seems to be the commitment stage, in which the committers with a high reputation on other sites was the largest hurdle.

This requirement could be made smaller if the system would be guiding the users towards community moderation.

Unfortunately, Stack Exchange does not seem to have any resources to develop a new site staging zone. I think this is a pity because the Stack Exchange system is really good for Q&A.

I have thought about how Area 51 could be improved and used some of the statements from Robert Cartaino as a starting point. I am not sure whether these changes will be sufficient to un-flaw the site creation process, maybe one of the community managers (CM) can comment on this.

It would be nice if our site-creation process allowed us to experiment with more impromptu site ideas, but the current system is not sustainable in the old format

My main ideas are to split the definition into smaller, more lightweight steps and to introduce a pre-private-beta prototyping stage in which the site would be tested in a sandboxed environment. The process would become like this:

This system is intended to lead communities that have not so much knowledge about Stack Exchange and therefore making the "experienced users" factor less important. Also, the system could theoretically be extended to allow "Community Guides" to be appointed, experienced users that help (together with the CMs) new sites to succeed.

Furthermore, I would like to see the system choosing about eight candidates (suggestions from the community could be included as some bonus-points for the internal score) for moderators from which the three pro-tem moderators are elected after two-thirds of the prototyping stage (simple majority vote, only one choice per user) Here are some exciting mockups for you: 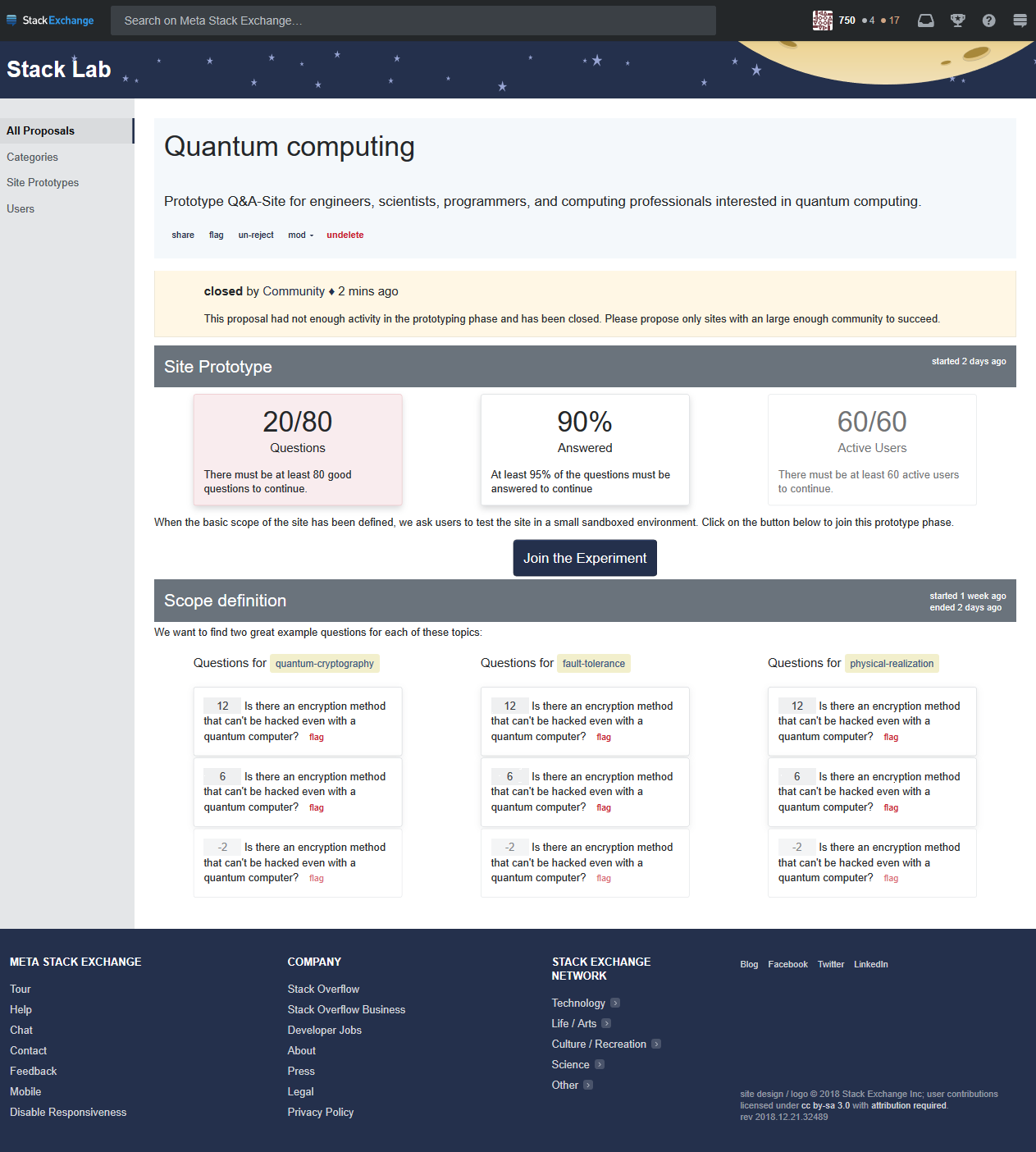 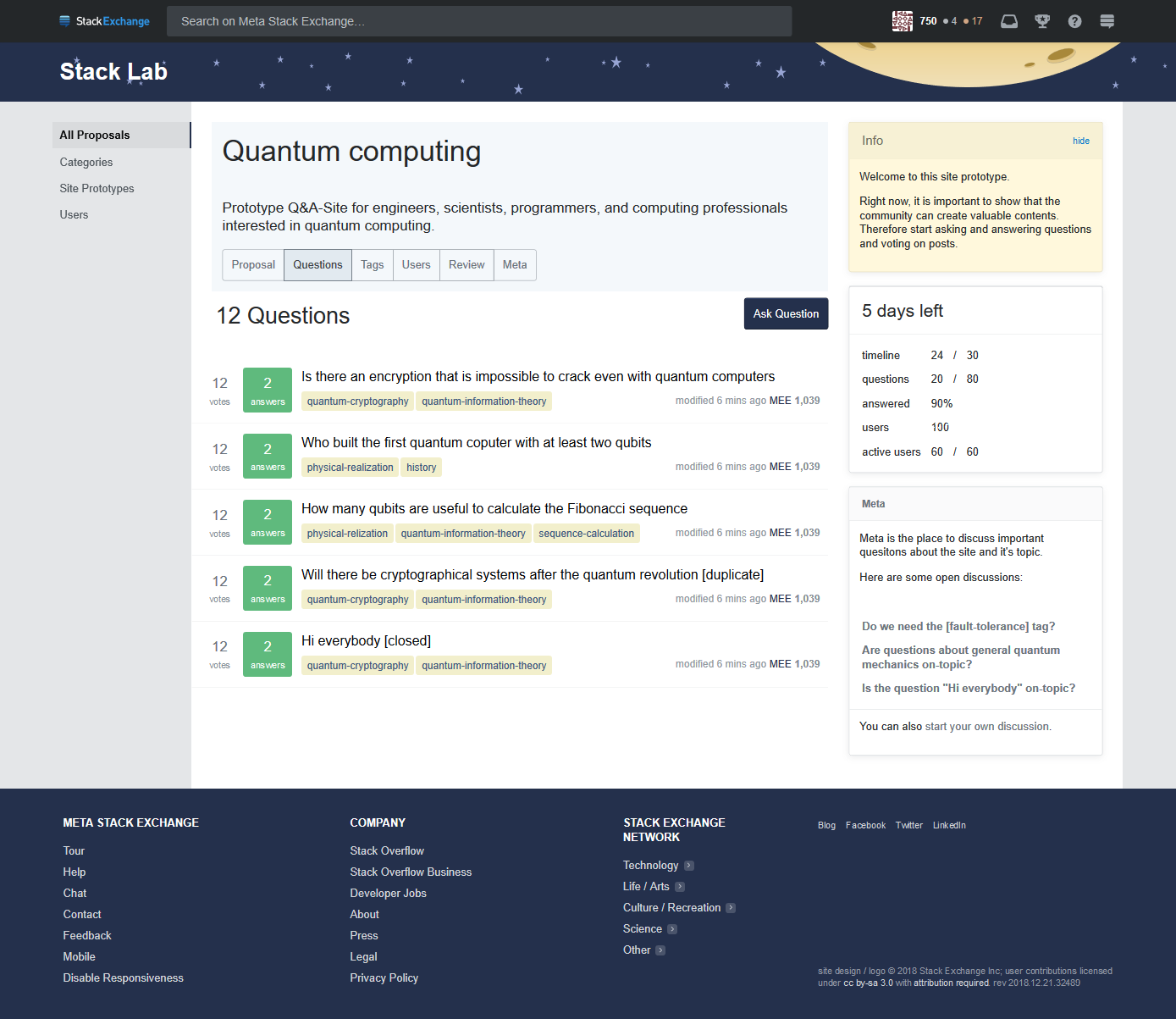 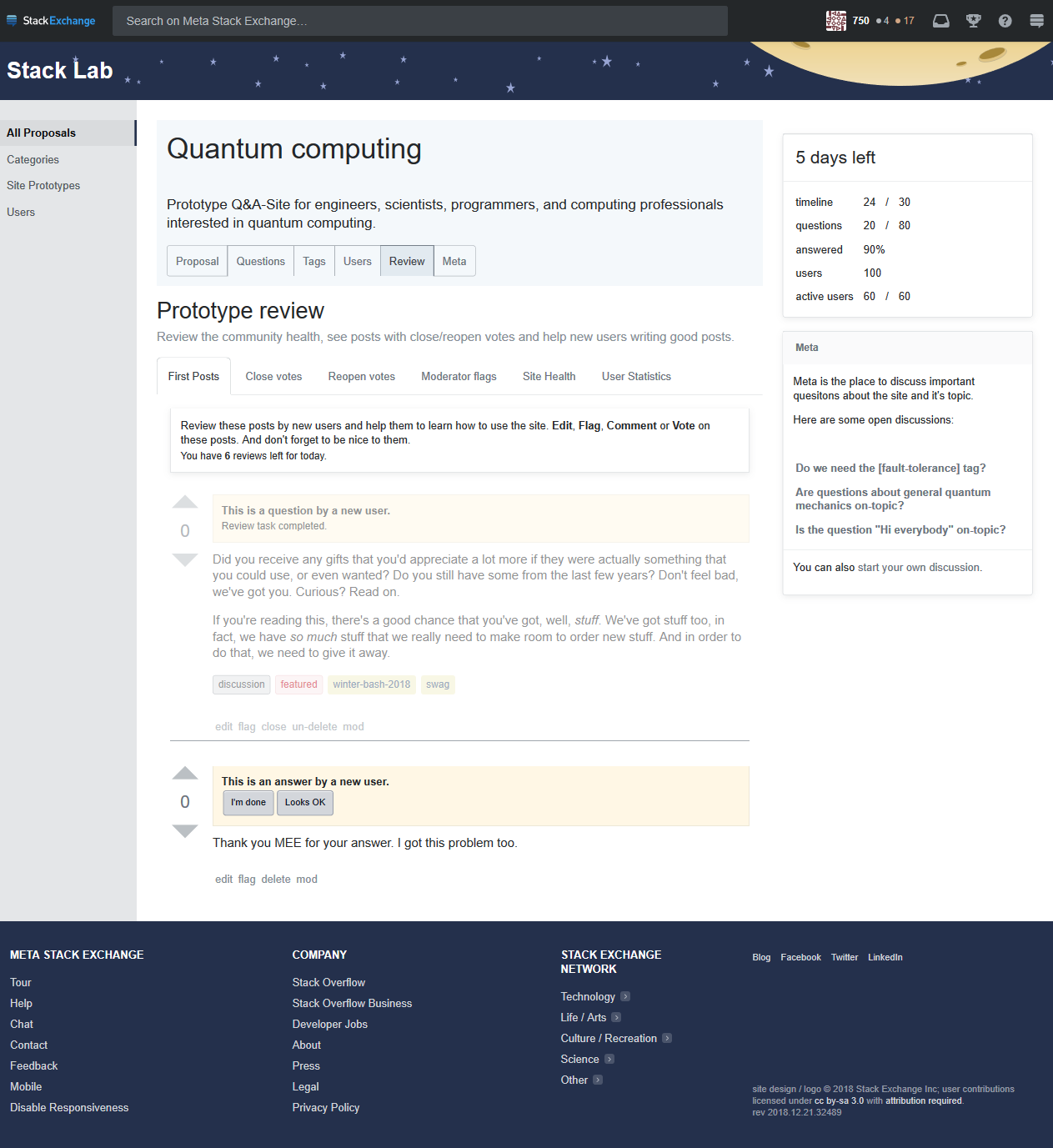 You might wonder, why should Stack Exchange do this change when they did not do all these other suggestions over the years? This is a good question and leads directly to the most important part of this post:

I propose to do it as a community project.

That’s right. I propose that committed members of the community help to develop an open source community building tool together. It would be published on GitHub with a permissive license as MIT, etc. Ideally one of the CMs would help us with ideas and maybe some of Stack Exchange’s developers would join the development process too.

This post is intended to solicit consensus about whether this type of community project is generally a good idea. Comments on the proposed implementation are also welcome.

What would SE need to do?

Stack Exchange would need to do two things only to support the creation of this project: They need to tell us what is important to them for such a site and they need to run the (final) version on their servers and use it as a replacement to Area 51.

Additionally Stack Exchange could support us by providing us a chat room or even creating a team for us to develop this. Maybe some of their developers join us and help with the development, but only if they want to.

What technology should be used.

As Journeyman Geek said in a comment: Stack Exchange will probably not run a site not built on their software stack. I don't think this is a problem. For example, the data explorer is also an open-source project running on Stack Exchange servers.

(Although it is not my tech stack I could still try to learn something or participate in other ways: frontend, ideas, etc.)

But wouldn't this process make it way easier to create new sites and therefore lead to segmentation and struggling/low-activity sites?

All proposals would still have to be reviewed by the Community Team or maybe even the Community Guides when they are close to the next stage.

Furthermore, proposals would still have to fulfill both minimum quantity and quality requirements in prototyping. These requirements would be enforced by system requirements and staff intervention.

And don't forget: Launching a full public beta site (or private beta if it is not removed) will always be a manual process.

What about Site sponsorship?

I think there could be a selection ("Would you sponsor this site?") that allows potential sponsors to quickly and effectively communicate with Stack Exchange. This may or may not result in less hard requirements for the Prototyping stage. I am not fully convinced whether or not this should happen. There are arguments for both sites (they want to pay money and have therefore probably enough users vs. only because a site is sponsored it should succeed and not fail the usual review criterions).

What should the requirements be?

I think every site should meet these requirements to advance from the proposal to the prototype stage:

As per a recent comment from Robert Cartaino, every site needs at least 150 to 200+ questions at the end of the private beta to be opened to the public (and not closed down). If the prototyping stage replaces the private beta, these requirements should stay the same.

One option would be to split the requirements into regular milestones, for example:

This should probably include only upvoted and open questions to limit abuse.

Not the answer you're looking for? Browse other questions tagged discussion area51 community private-beta .

612
Formatting Sandbox
1472
Fastest Gun in the West Problem
1827
Could we please be a bit nicer to new users?
2783
A Terms of Service update restricting companies that scrape your profile information without your permission
487
Congratulations to our 29 oldest beta sites - They're now no longer beta!
2468
Firing mods and forced relicensing: is Stack Exchange still interested in cooperating with the community?
2191
Stack Overflow is doing me ongoing harm; it's time to fix it!
1552
Thank you, Shog9
970
Firing Community Managers: Stack Exchange is not interested in cooperating with the community, is it?
550
The company’s commitment to rebuilding the relationship with you, our community