Author reviewing edit after it has already been rejected

One of my edits was recently rejected on Ask Different. Two people rejected it, but then the OP reviewed it as "Edit". 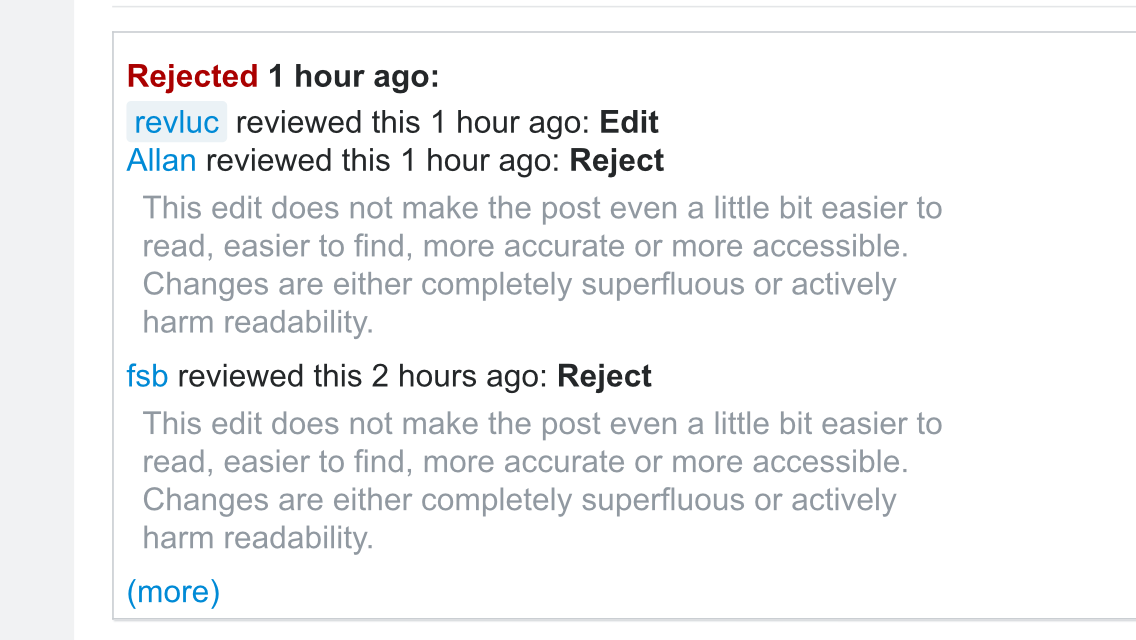 Is this intentional behaviour or a bug?

Unlike what was said in the comments, this is not a case where the author overrode the rejection. In that case, the only option presented to the author would have been "approve", and the outcome of the edit would have changed to "approved".

What likely happened here, as evidenced by the fact that the "edit" and the second rejection happened at approximately the same time, was that the author was notified about the suggested edit, and clicked to review it when only one user had rejected it. Then, they opted to click the "Improve Edit" button, but before they could submit their improvement, a second user voted to reject it. (Since the review was already completed, that may be why the Community user also didn't vote to approve it.)

The system allows users to submit reviews to posts if they loaded the task while it was still reviewable, but didn't submit their review until after review had completed.

104
Could authors overturn recent community review decisions?
40
How is this user able to review posts so long after they were completed originally?
2
When to post on Stack Exchange meta, when to post on [site] meta

792
Allow an edit to notify downvoters: “I think I've fixed the issue now - please check”
679
How do I get attention for one of my own questions without a good answer?
277
How do suggested edits work?
410
Decision on rejected edits should be displayed as a notification to the editor
342
Reject an already-approved suggested edit when rolling it back
381
The robo-approvers are killing my will to review edits
298
Moderators should be able to manually ban users from suggesting edits
293
How do we encourage edits to obsolete/out of date answers?
2253
Firing mods and forced relicensing: is Stack Exchange still interested in cooperating with the community?