Why should a flag be declined if it was correct at the time? [duplicate]

Ask Question
Asked 2 years, 4 months ago
Active 2 years, 4 months ago
Viewed 62 times
2
This question already has answers here:
Is it fair to penalize those who flag when their flag was accurate at the time of submission? (2 answers)
Flag Declined after posted edited the post [duplicate] (3 answers)
Moderators should see the post as I flagged it, not the edited version (5 answers)
Closed 2 years ago.

A question was posted a couple of days ago that was blatantly off topic. I do not yet have 3,000 reputation here so I am unable to vote to close a question. Instead I flagged it with the "Blatantly off-topic" reason:

One minute after I flagged it, someone edited the post to make it ask for a site recommendation for where to ask the question that had originally been posted. Now, of course, the question is on topic. The question went through the close review queue and unsurprisingly got three votes to be left open. This caused my flag to be declined.

As I understand it, there is some kind of penalty for having a certain number of flags declined. It seems odd that I could possibly get into this situation by flagging a question for a perfectly valid reason which only became invalid due to a change that was made after I flagged it.

Is this status-by-design? Should I not flag posts for closure due to the concern that they might later be edited which will render my flag retroactively invalid?

Here are some screenshots just to show the timeline:

This one shows the three leave open votes over the course of the next hour or so, with the final one coming at 17:59. 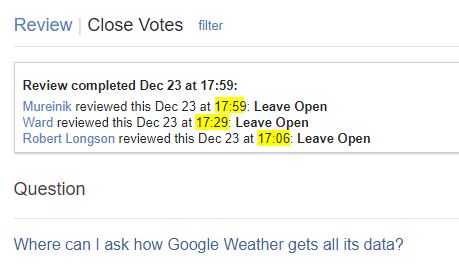 And this one shows that the flag was declined at precisely 17:59, i.e. as soon as the review was completed.

This happens to me a lot. Just remember: it takes 5 votes to close a question for a very good reason. Nobody is perfect at closing questions. So just don't worry about occasionally having a close flag declined.

The only penalty of having a lot of declined flags is that it can decrease your daily flag limit overtime. Other than that, there's not a penalty for declined flags.

Not the answer you're looking for? Browse other questions tagged discussion support review flags declined-flags .

37
Moderators should see the post as I flagged it, not the edited version
4
Is it fair to penalize those who flag when their flag was accurate at the time of submission?
2
Flag Declined after posted edited the post
-1
Where can I ask how Google Weather gets all its data?

1809
Could we please be a bit nicer to new users?
534
The current review system encourages fake reviews; some people upvote everything rather than actually fixing problems
700
Your answer is in another castle: when is an answer not an answer?
298
Add optional box for spam flags letting you say why you think it's spam
2781
A Terms of Service update restricting companies that scrape your profile information without your permission
412
Can a machine be taught to flag spam automatically?
2445
Firing mods and forced relicensing: is Stack Exchange still interested in cooperating with the community?
2142
Stack Overflow is doing me ongoing harm; it's time to fix it!
951
Firing Community Managers: Stack Exchange is not interested in cooperating with the community, is it?