Simple question: can anybody help me understand what moved a reviewer to reject with this review comment:

This edit was intended to address the author of the post and makes no sense as an edit. It should have been written as a comment or an answer.

Below screenshot captures the edit for which this review comment was written.

Reason for asking: it seemed like a mistake to me, but I might be misunderstanding. I do value quality content so I would like to understand why one would reject this edit. I do not understand the feedback given.

EDIT: I sometimes hear that big edits should be separate answers, even though the core of the answer did not change (such as in this case). This feels like pollution and the original answer poster misses the rep. At the same time we see answers that became 'community content' after many edits and changes by many users, often containing high quality content. For me it seems that any edit that improves on content is a good thing. So why such reject? What are the guidelines? 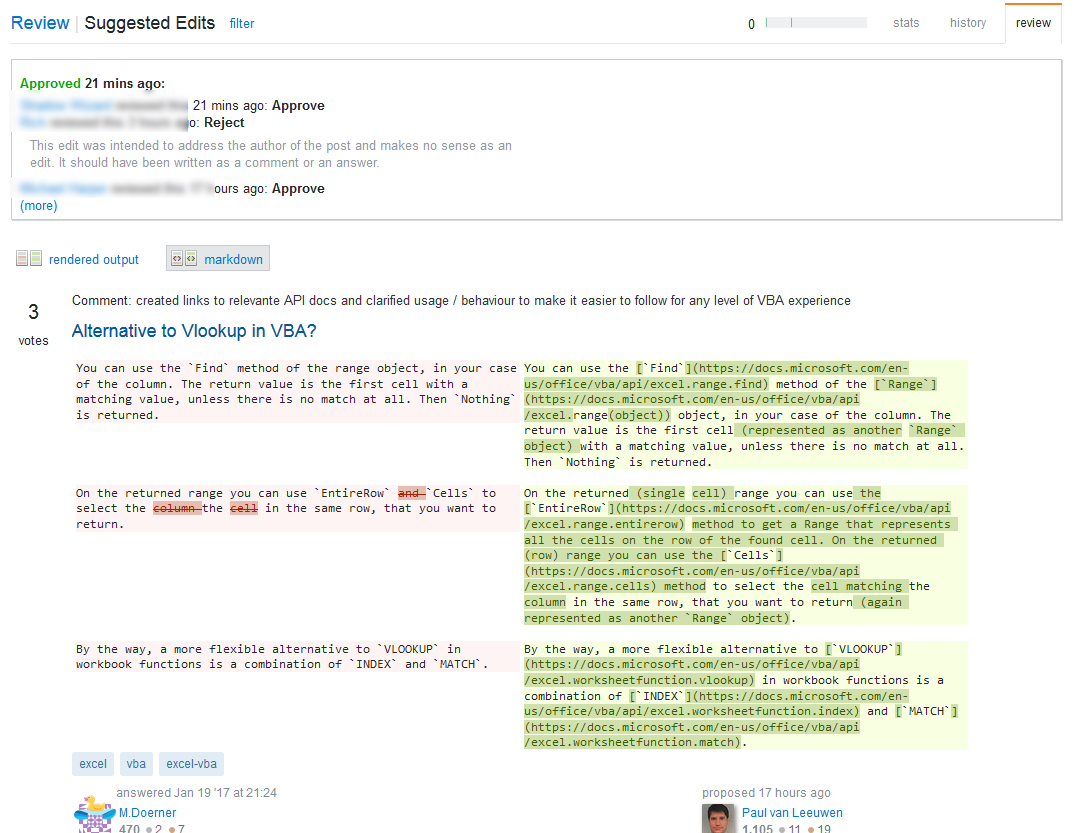 TL;DR: as explained below in detail, such edit requires lots of review time, compared to other edits, and thus is better done by the answer author. To achieve that, comment should be posted under the answer, asking the author to add the details and/or links. That's why the reject reason does make sense.

Suggested edits are not expected to make major changes in answers. Such edits are not always wrong, but they require lots of time from the reviewers to go over and see if they're really legit or not.

Adding text to clarify an answer, when done with more than one sentence added, is already considered such a major change, even if the meaning of the answer wasn't changed.

When done by a user with the full edit privilege (2k rep) it's usually totally fine and legit, however, when it's done as suggested edit which require other people to spend time on it, it enters a gray zone.

It's hard for me to classify this, but I refer to this as something which is "good, but not really needed". Personally I usually skip such edits when seeing them because I prefer to review several items in the short time I spend on this, but if I do have time I'll approve such edits, since they are not really wrong and do make the answer better.

It's likely because you were not fixing an error with this edit, but adding new information in the form of links... Apparently the person who rejected the edit believes that such a change in information is a drastic change, and would be better off as a completely new answer of your own, or as helpful comments below the original contributor's answer.

It definitely isn't an "attempt to reply" or anything like that. But if you're just taking a quick look, you'll see a whole mess of green and added text, and it certainly does seem weird. That doesn't mean it should have been rejected for that reason, but I can see why someone might.

To me, it looks like they just might not have been paying too much attention. I'm sure it's happened to everyone, where you either click the wrong button, or misunderstand the situation. It's one of the reasons it takes 2 people to make the same judgment (approval or rejection) on a suggested edit before anything happens.

Or, as Shadow Wizard pointed out, it does add quite a bit of content (at least in the editor view) to the answer, and so it could be taken as an attempt to reply.

If I had seen this edit (I wouldn't have, because I filter to android), I probably would've rejected it as being superfluous. Sure, you added some links to documentation for different classes(?) in VBA, but to me, it doesn't seem like they really add all that much to the answer. It's not discussing those classes, but rather just instructing the OP to use them.

Of course, people might not agree with my hypothetical decision to reject it (and I see at least 2 people wouldn't). But again, that's why it takes 2 people to approve or reject an edit, so one mistake or outlier doesn't have full decision-making power (You can technically just "Improve Edit" or "Reject and Edit" to override everyone else, but I haven't really seen that abused).

By the way, you probably don't need to blur people's names out. We're not going to find all of that rejecter's posts and downvote them because they did something that might be wrong. It also took me about 10 seconds to Google the title of the Q&A in quotes and find the answer in question.

Not the answer you're looking for? Browse other questions tagged discussion comments review .

1108
Encouraging people to explain downvotes
594
How do comment @replies work?
276
How do suggested edits work?
126
New Feature: Community Review Tasks - Now in Beta
522
The current review system encourages fake reviews; some people upvote everything rather than actually fixing problems
152
What are the guidelines for reviewing?
111
How can we make First Posts review actually useful?
291
How do we encourage edits to obsolete/out of date answers?
819
Net Neutrality and Stack Overflow / Stack Exchange
2208
Firing mods and forced relicensing: is Stack Exchange still interested in cooperating with the community?