End-of-year posts seem to have become the tradition these days, so I'm back again with a third Year in Spam. Welcome back, folks, to another round of statistics you never needed to know.

All times/dates are UTC.

In total, we saw 35,636 spam posts this year across the network. That's down from last year:

Ask Ubuntu continues to catch up with Stack Overflow this year - from a difference of just under 7% last year it's now down to just over 4% behind. Other sites in the top 20 remain in fairly similar places, although The Workplace has dropped significantly.

2018 has mostly followed 2017's line in this regard, though spam has been a little more spread out through the day (i.e. less confined to peak hours). Behold - the chart returns (the y axis represents the proportion of spam posts created in each hour group). 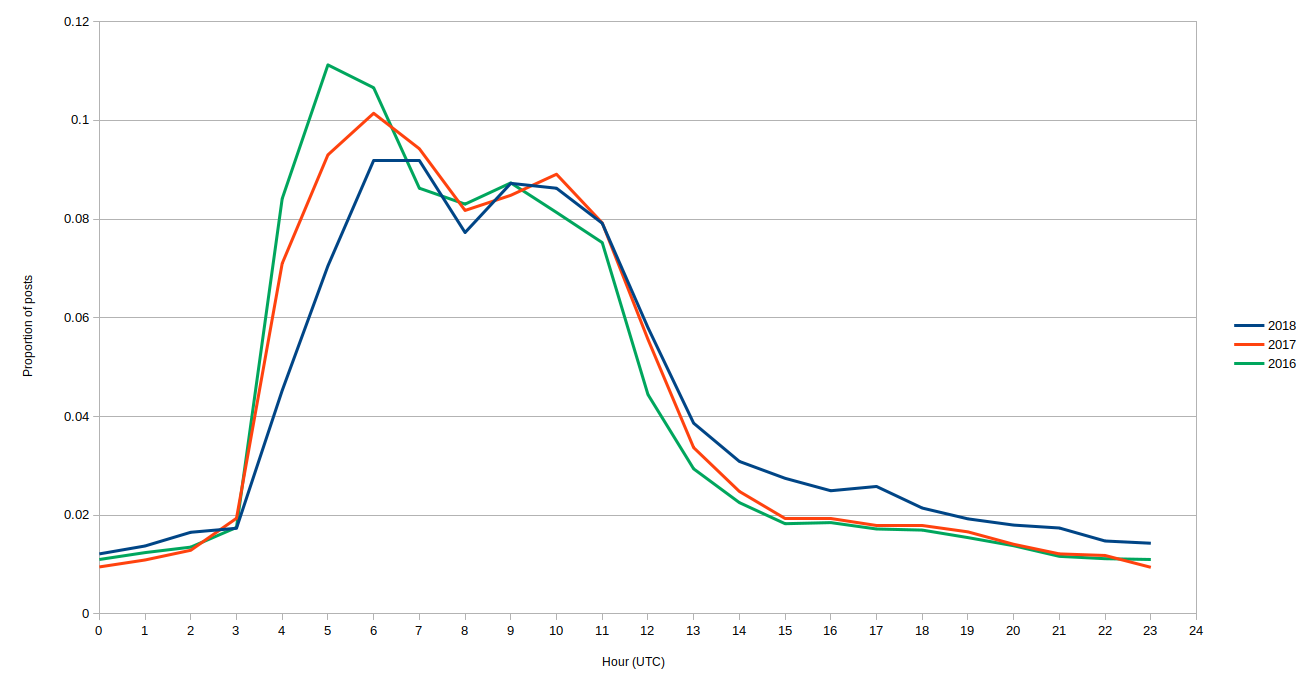 2018 was not a great year in this regard — despite (or perhaps because of - we're not really sure1) improvements to the autoflagging system. The time it takes, on average, to delete a spam post, was higher at all hours of the day than it was in 2017 (although there are still some gains over 2016). 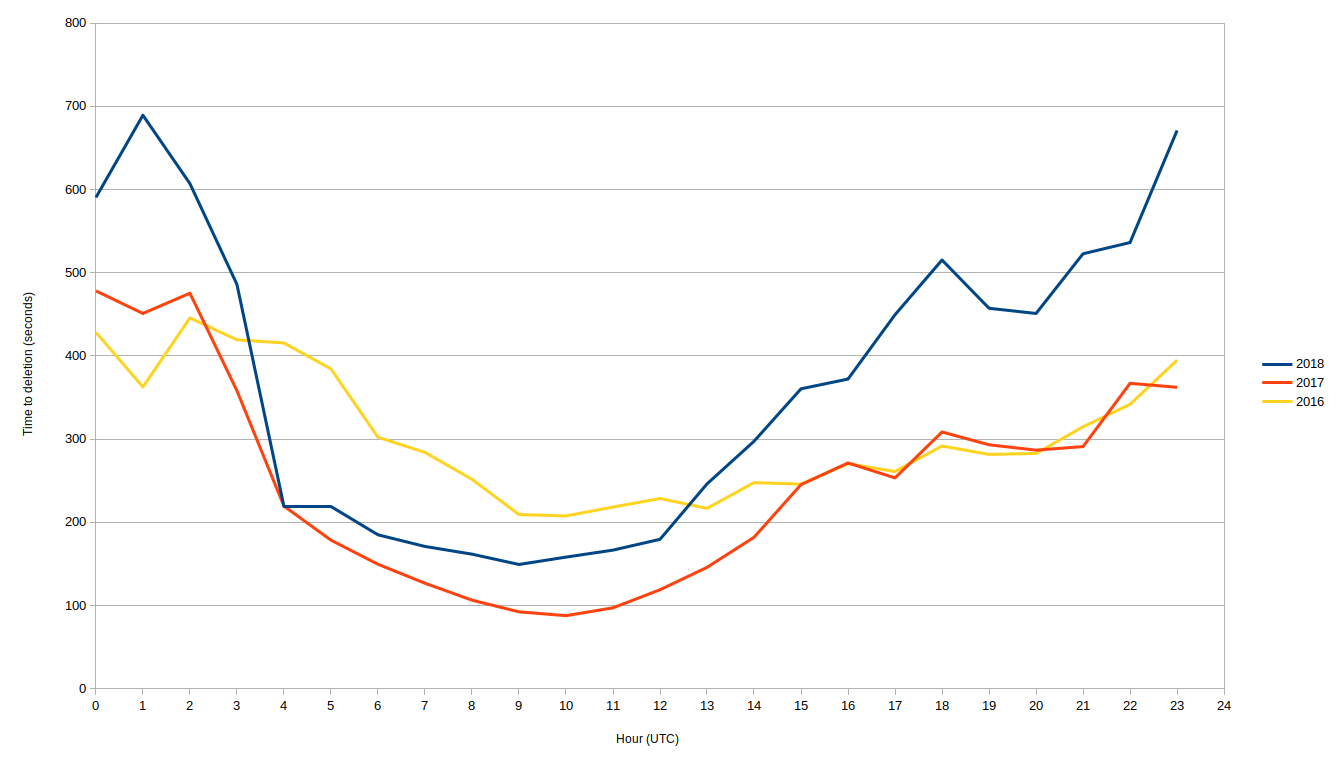 Charcoal's autoflagging project currently stands at 45,183 posts flagged, of which 44,990 were confirmed to be spam - that's 99.57% accurate overall. There are 335 users participating - 31 of those users are moderators, of 173 36 sites between them (bad Catija, skewing my numbers with CM multi-diamonds).

This graph shows the overall progress of the project: a number of posts flagged and flags cast per month, since inception. 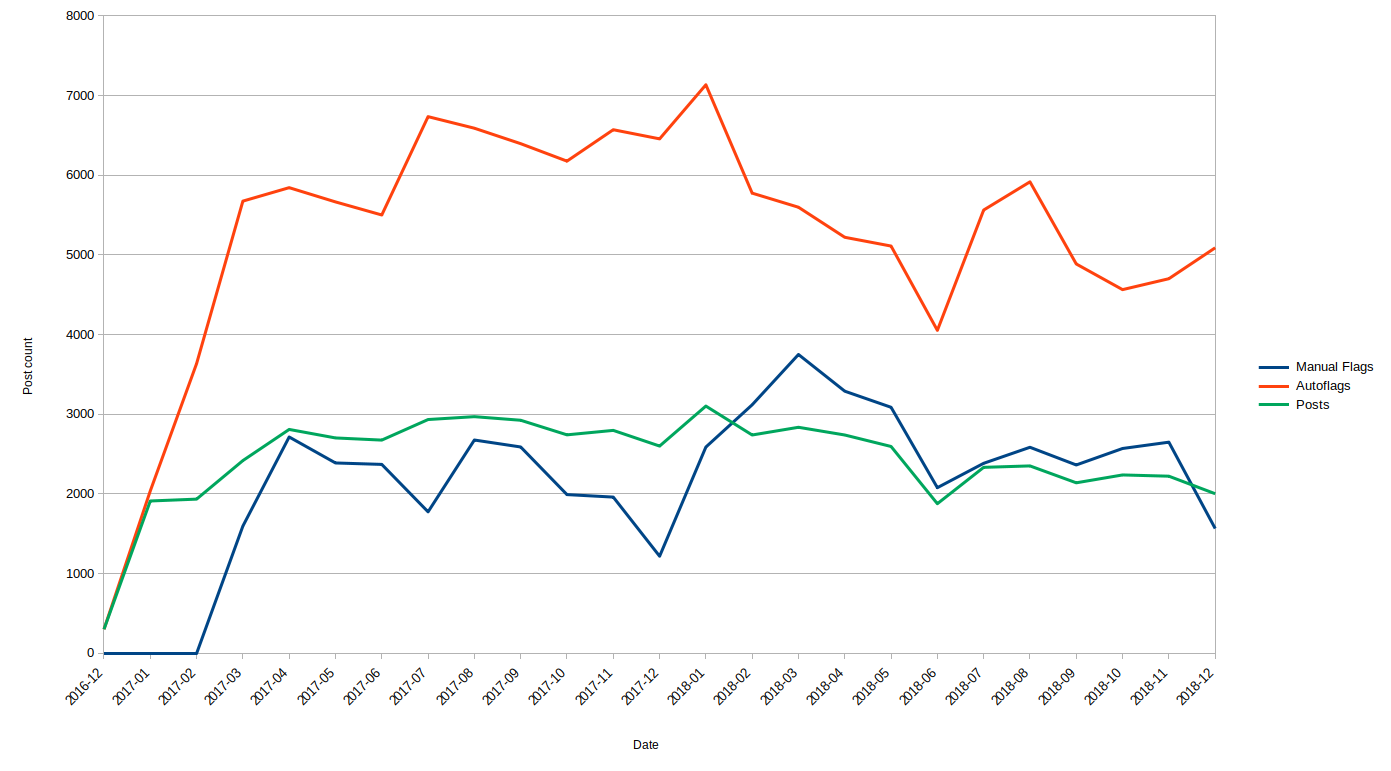 1 This could also be down to improvements in TTD tracking this year, which remove a previous minor bias towards lower values.

Thank you for sharing in public what the effort you and all that participate in several roles have achieved and how it helps in making Stack Exchange sites a better place.

I do know most Charcoal visitors use userscripts to be more effective with handling spam posts. Do you have stats on which means are used by those users you can keep track of? If you don't have those stats, is it worth adding some measurement so you can report on those over 2019?

If we still believe that expedite removal of spam is warranted, which measures and/or actions are needed by us flaggers to achieve better time to deletes over the whole day.

I have have been contacted twice or thrice over the last year where Smoke Detector panicked and informed me of an auto-flag gone south, mostly leading to a declined flag in my flag-history . How many of such cases in 2018 did we have?

Not the answer you're looking for? Browse other questions tagged discussion spam statistics data-analysis .

173
A machine can flag spam automatically. Can it do better?
145
Allow retracting flags from the API
-6
Can we do more to stop bots from posting?
2
Expanded code block not showing all the code sometimes in app

305
What are the “spam” and “rude or abusive” (offensive) flags, and how do they work?
151
Should spam posts be edited?
128
Recent Mass Football Spam
300
Add optional box for spam flags letting you say why you think it's spam
47
2016: a year in spam
422
Can a machine be taught to flag spam automatically?
173
A machine can flag spam automatically. Can it do better?
52
2018: a year in closing
363
Let's take a look at the interaction between staff and the "power users" of the network