Writing.SE has raised the issue of our desire to graduate a year ago

Here it is: we're tired of being a beta site. We believe we have been a consistently successful site, we've been around for more than eight years, we have over 1,000 avid users, we have 100% answered questions, and we get over 12,000 visits a day. We might not be as big as Stack Overflow, but we're certainly not "beta" anymore. Here are our stats, take a look for yourself.

In and of itself, this is demoralising. Writing is different in its nature from programming. It does not raise as many questions that can be answered within the SE format. We are never going to sustain 10 questions per day, no matter how strong of a site we are. We sustained it for a few weeks with a community push; it didn't help. Our community is focused on quality, not numbers. Are we then to remain in beta forever? Are we to suffer forever all the damages mentioned above, and never enjoy the advantages that a graduated site gets?

Furthermore, having done some research, we came to realise that the "rule" is being applied to us selectively, and has not been applied to a significant number of other SEs. Here is the total of what we've found. Some examples:

This unequal treatment surprises us, to say the least.

This problem is systemic. SE's rules brand smaller sites with an inappropriate "beta" label long past when it applies.

This proposal to remove "beta" from sites like ours was made in 2017 and gained a lot of community support, but nothing has happened since, even though its author now works for SE. Read the answers there and see how frustrating and demoralising being branded "beta" for years and years is.

Robert Cartaino, one of SE's most senior community managers, deleted his answer to this question with the following explanation:

@MonicaCellio Deleting this because the proposal to remove beta labels and unravel graduation as we discussed is going nowhere. I'll post something if anything ever becomes with it. – Robert Cartaino♦ Jun 27 at 18:39

For all the talk of fixing beta and graduation, even he hit a brick wall. How can we remain hopeful in light of that?

In light of all the above, we, Writing.SE, ask for graduation, now.

Design elements take time, we understand. But, as a first step, we ask for the immediate removal of the 'beta' label, and for an official announcement that we are moving towards graduation. Surely that's not much to ask for?

We have been told that "soon" graduation will no longer be a thing. But we were told this a year ago, and have heard nothing since then. SE has been talking about it for at least four years. How long must we wait?

For a year since we've made the request, we have waited and suffered, and the damages of the site remaining in beta accumulated. "One day" the whole system would be redesigned. "One day" graduation would cease to exist. But when would that day arrive? They say there's nothing more permanent than the temporary. Well, how much longer must our "temporary" beta status last?

If there are objective reasons why we should not graduate right now, why we should continue to be called "beta", we would hear them. If there are any recommendations as to how we could help our SE grow further, we would appreciate them. But we cannot stand to be mislabeled any longer.

Other "beta" SEs — if you feel as we do — join us, speak your mind on this issue! Does the "beta" status stifle you as it stifles us? What changes do you need, that only graduation can bring?

SEs who have graduated without the "excellent" stats required of us — what can you tell us about graduation? How has it affected your SE? Was it a positive change, or did graduating without perfect stats cause problems?

How can we advance our request to graduate? What blocks us?

While Writing isn't "Graduated" in the classic sense of the concept, they're no longer burdened with the "Beta" text in their top bar as of 1 August 2019. For more information, see:

I'd like to say thanks to the users on Writing for their patience. This has (and will continue) to be a long process that we're still working through. I hope that this initial change will help you feel better about your place in the network and allow you to focus on continuing to build an excellent site without the burden of the "Beta" label.

I also appreciate your persistence. While we made this change to many sites at once and we had the intention of moving in this direction for the last year at least, your nibbling at our ankles kept us moving forward. We may have gotten there eventually without it but probably not so soon.

I thought the new design–the responsive one–which began rolling out in April 2018 and was completed in December 2018, was supposed to speed up the design of new sites as well as fix bugs and add new features.

This is going to result in two key improvements for all of our users:

In my view, the entire issue of graduation boils down to a question of custom design, there is no other explanation that justifies this long a delay. SE cannot seriously be arguing that Writing.SE, with those stats, should still be stuck in public beta. In 2010 and 2011 nobody suggested that a novice site might have to wait eight or more years before they could graduate.

When Will My Site Graduate? Posted on October 21, 2010 [emphasis not mine]

In the earliest days of Stack Exchange, we started a lot of beta sites in quick succession. Those sites are now racing past the end of their official 90 day beta periods. And that’s OK. There’s no harm in staying in public beta far beyond the initial 90 days, so long as the quality of the Q&A is high and it’s not a ghost town. It takes the time it takes. But if you want your site to graduate from beta sooner rather than later, encourage your fellow community members to vote early and often!

However by 2012 that level of optimism had been reined in and the criterion whereby a site was eligible for graduation was issued [emphasis in bold mine]:

The New Stack Exchange Beta Theme
There was a time when we thought the average beta period would last, oh… about 90 days. The site would begin and build up enough content and users to reach critical mass. Reaching that tipping point of unstoppable growth defines “graduation.” But getting to that point is hard work, and it usually take longer [sic] than 90 days… much longer. So we’re left with this big gap between the time when a site is truly “under construction” to when it finally reaches graduation and gets its own custom design.)

Fast Forward three years, in 2015, new goal posts had been erected. Graduation, site closure, and a clearer outlook on the health of SE sites [emphasis in bold not mine]

and here's the result: from now on, when a site starts to consistently receive ten new questions every day, we'll consider it for graduation. […] Thanks to many devoted users, it’s grown clear that smaller SE sites can do a great job of maintaining themselves and producing high quality Q&A. Not every site is going to be a blockbuster success, but our small sites are serving their own communities well. We’re proud of you, and we want you here.

Despite the positive feedback, the praise and the acknowledgements of a fine job done, Ana (community manager) admitted that a site could remain in beta indefinitely

Has the criteria since changed? Is success and value ultimately measured by the number of questions posted daily? Are over 1,000 core users, and eight years of useful contributions secondary?

Let the new system, the site life cycle workflow, which is said to be currently in the pipeline, come into force when it is fully completed.

[UPDATE July 6, 2019
It seems the aforementioned SLCW, formerly known as "An Objective Site Life Cycle" (Aug 12 '15), has been either abandoned or placed on hold. Robert Cartaino's answer, which promised this future development, was self-deleted in June, 2019.]

But why should Writing.SE still have to wait before they can enjoy the fruits of their hard-earned labor? How much longer?

Closely related and often cited in the Stack Overflow Blog is the question What are the criteria for getting Money.SE out of “perpetual beta?” Posted on April 4 2011

Money.SE is now called Personal Finance & Money SE and was promoted four years ago. Let's compare their stats with Writing SE as of today, 24 February 2019, and also for the benefit of users who have screen readers.

In March 15, 2019, the number of questions posted on Writing had increased to almost twelve questions per day. Today, July 6, 2019, that number has dropped to 4.2. However, the requirement for 10 questions per day was to verify whether a site could survive longer than 6 months, Writing.SE is almost 8 and a half years old! At this point, it is abundantly clear that the criterion was only used as an excuse by the company. 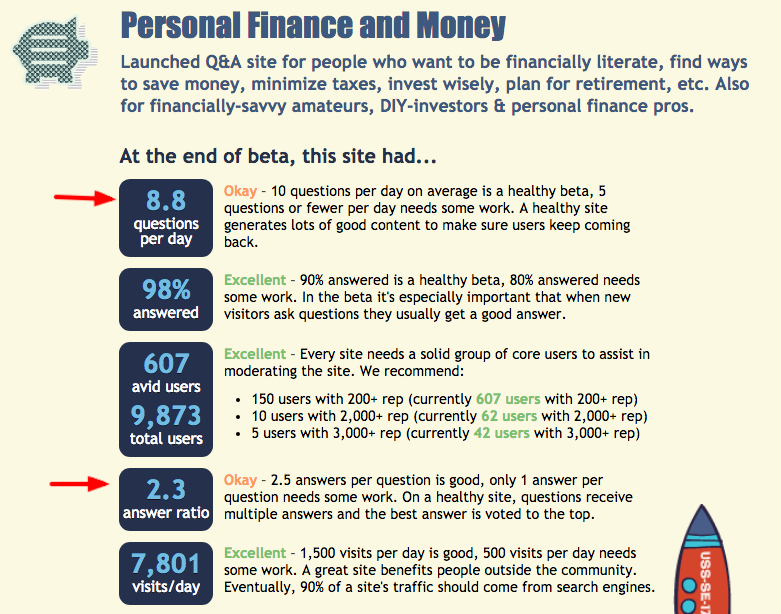 Here's an interesting query that I came across, the graph below shows the average score for questions posted on Writing.SE since its inception in 2010. 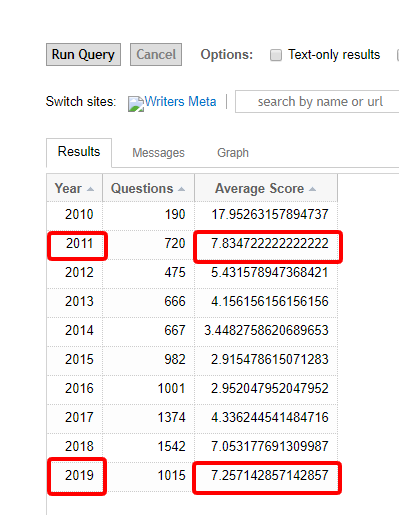 In 2019, the average score for questions on Writing is 7.25. That's a pretty amazing result if you compare that data with 2011, where the score was an impressive 7.83 and we're only in July. Writing.SE may not have the same numbers of viewers or contributions as Stack Overflow or any of the larger sites on the network but it appears Writing.SE doesn't suffer the plight of low quality questions and the growing apathy among its community members unlike the giants: Stack Overflow (0.28), Mathematics (0.97), and Super User (0.33).

How complicated is it to remove a misleading and, ultimately, harmful label? Is there need for any further evidence that Writing.SE can stand proud on its own two feet?

880
The Many Memes of Meta
150
Ch-ch-ch-changes: Left nav, responsive design, & themes
498
Congratulations to our 29 oldest beta sites - They're now no longer beta!
410
Graduation, site closure, and a clearer outlook on the health of SE sites
104
Should we rename or remove the "beta" label?
58
Is everything OK at Stack Exchange now?
44
What should the criteria be for Stack Exchange sites to leave beta?
103
Let's break up with "Graduation" and remove a bunch of "Beta" labels
38
Private betas, launches, relaunches, rules for promotion, and community partnerships
143
What are the reputation requirements for privileges on sites, and how do they differ per site?
See more linked questions

1002
Show all of my question/answers to me even if they are deleted
410
Graduation, site closure, and a clearer outlook on the health of SE sites
239
Feedback Requested: Design-Independent Graduation
104
Design-Independent Graduation is on for early September!
2805
A Terms of Service update restricting companies that scrape your profile information without your permission
103
Let's break up with "Graduation" and remove a bunch of "Beta" labels
459
Employee profiles are now marked with a “Staff” indicator
498
Congratulations to our 29 oldest beta sites - They're now no longer beta!
2528
Firing mods and forced relicensing: is Stack Exchange still interested in cooperating with the community?
765
New Feature: Table Support