Do not delete good duplicates!

This question (currently deleted (visible only to 10kers)) is a great example of a duplicate question that should not be deleted. [Note: this question was later merged into this one, which resulted in the original being hard-deleted. This issue with merging was later fixed ]

The titles of the duplicates are completely different. Having duplicates around greatly aids search hits on the site.

We need to keep questions like this around for the benefit of the community.

Both questions have around 4K views. They are both relevant. I cannot believe that a question with over 3K views is being deleted.

Edit
Search for python continue line and python line break in google. Both answers are top hits. They should both be open.

I agree. As far as I'm concerned, only off-topic or unintelligible questions should be deleted; duplicates are quite useful to keep around.

This seems to be Jeff's intention as well:

And some time later:

I wish people wouldn't delete questions with good answers. You're destroying the useful contributions of your peers!

The reason we want to keep both of these questions is because they have key words in them that will assist future searchers.

This is handy, because oftentimes you don't know the proper terminology, especially when you're dealing with a subject that you're unfamiliar with.

A new programmer might not know the phrase "line continuation" -- if they did, they would probably just google "python line continuation" and get an answer right away. But because this is a place where people can ask questions and get responses from real live people, we can ask open-ended questions, or describe something that we're not sure there's a proper term for.

So if they are identical -- completely, totally, same-hash-result identical, then yes, of course, delete them. If they are two different paths to the same answer, keep them.

It's a tough call, especially with older questions. Duplicates are great when they work to funnel traffic back to an authoritative answer, but some older dups lack links to the questions they duplicate, or contain many good answers. In the former case, the question is actually counter-productive to searching (rather than acting as a sign-post, it behaves as a distraction), while in the latter case users must read both questions to access all relevant answers.

And then there are duplicates of questions that should never have been asked on SO in the first place. Whatever your feelings are on questions like "Best Programmer Joke", there's really no need to have multiple instances of those cluttering up the site and encouraging more new users to mimic them...

So current my strategy is this:

Unfortunately, merging is also broken. It leaves no signpost, not even a deleted one. Migrated questions at least leave the question itself, locked, for future searches to find... a strange discrepancy indeed, considering most migrated questions are completely off-topic and don't particularly benefit the site when they appear in search results. I strongly encourage everyone reading this to vote for the When merging questions, leave the duplicate one as a placeholder suggestion (and the answer about automatic redirects as well... ); if this were implemented, I would have no qualms about asking moderators to merge questions like the one referenced here.

Update: Since it was implemented, please try to merge duplicates that get good answers whenever possible.

I think if you can, by editing the title in the original, coalesce two questions into one, then deleting is still ok. Not every duplicate needs to be kept and with some manipulation you can make the original easier to find and remove the need for the duplicate. I don't know that the referenced question is a particularly good example of that, though changing the title of the first to:

might suffice to make the second question unneeded. The reason I say that, is that the question is relatively simple and the answers nearly identical in content.

In some cases, however, the question might not be worth keeping, but the answers in the duplicate may be. In that case, merging questions might be a better option and I would flag for moderator attention if that were the case.

Note, too, that there is a risk with duplicates -- the search may find the question with an answer that is not as good as the original, in fact, there's no guarantee that it won't be wrong. A question closed as a duplicate may not get the attention it needs to have a correct answer emerge as the best. Merging questions, where feasible, could avoid this.

Just as an example: I just noticed a question on Super User that was closed as a duplicate 12 hours after it was asked, but meanwhile has received 20,648 views in about 2.5 years. The older duplicate was viewed 6,665 times.

If this duplicate would have been deleted, then I guess we would have seen more duplicates posted, and maybe people would not have found their answer at all.

However: I find it odd that not all viewers clicked through to the other question. This might be caused by the answer that was posted to the duplicate, but I'd still be curious what the other answers would be. 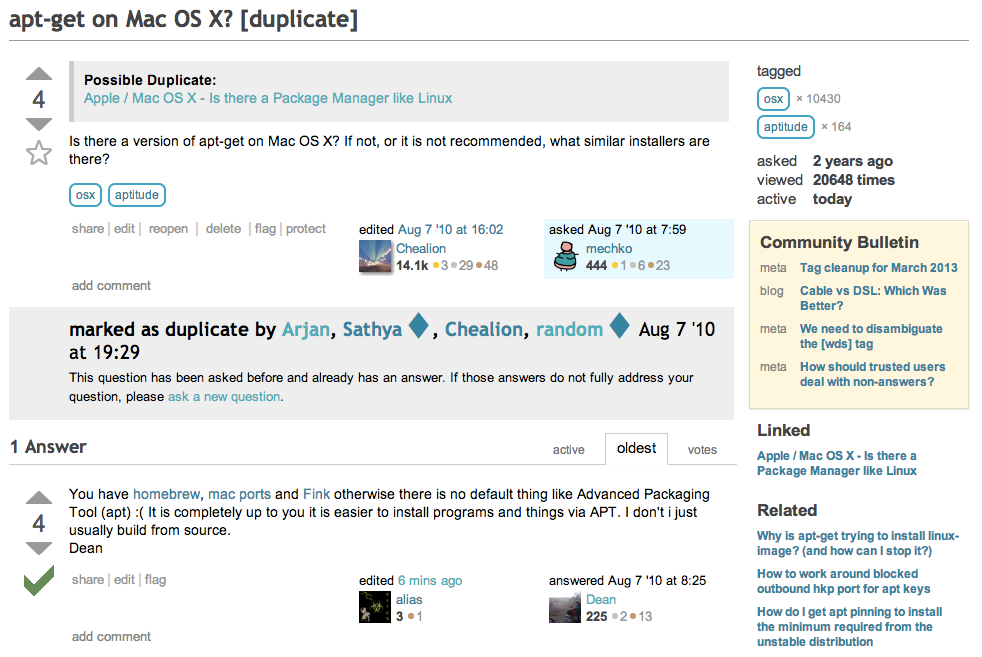 I am one of those who flags duplicate questions for moderator attention, asking that the answers get merged onto the original question. Keeping duplicates around means that the responses are distributed across several questions, which hampers those who actually do perform searches on the site first before asking a potential duplicate.

However, perhaps we can handle duplicates better, perhaps by saving the text of the duplicate question (rather than discarding it, as now) so as to preserve the alternate phrasing. However, I would prefer that the moderator who performs the merge performs the reconcilation by hand, by editing the original question as appropriate so as to include the alternate wording.

At the risk of incurring everyone's wrath, I'll admit that I was one of the people who voted to delete that. I'll explain my thought process for the sake of discussion...

Although I understand the stance put forth by Jeff about the usefulness of duplicates (i.e. improving the coverage and search results), I can't help but wonder if a year-old, sparsely-tagged, closed duplicate question is really going to help at all. Consider that even though the original question and the duplicate have been around for over a year, we still had this question appear just 11 days ago (and I'm fairly certain I've seen even more copies of it show up before).

In short, I must admit that I have doubts about keeping duplicates around:

I'll concede the point for this particular question, since it does have a lot of views and a good rank on Google. However, I still don't like the idea of having content distributed across multiple questions, and would still lean in the direction of a merge at least. Perhaps just the answers from the duplicate can be merged into the original, leaving the duplicate question as merely a routing point to the answers?

Incidentally, I just noticed that 10k+ users can vote for delete/undelete as many times as they want (unlike close/reopen votes). That could make for some ugly delete/undelete wars (like the one the question seems to be undergoing now). But don't worry... I won't be voting to delete that one again.

Take, for example, this MATLAB question I answered earlier today. Now, MATLAB is hardly a popular tag on SO (currently just 1,003 questions out of 578,286 total), and the question above currently has only 39 views, 4 answers, and nothing voted higher than 4. And yet it is already fifth on the list when I search Google for the phrase "MATLAB duplicate rows", and it's only fifth because four links to The MathWorks (the makers of MATLAB) come in before it!

I'm not saying it's a bad question. Many MATLAB users would probably find it quite useful and informative. But if an underdog like that can rocket up Google's search result list, is good Google ranking really a legitimate reason to keep old duplicates?

To post a counter argument to this (though I agree with the points made). If duplicates were deleted then the problem with lots of questions getting lots of points would be less prevalent. (As the rep from upvotes would be lost on the next recalc.)

Maybe that could have deterred the "halfing the points for questions" change. (Or at least if dupes did not gain rep. it may have been able to make the change less needful.)

Everybody can help with the searching side of this issue

If the title of the duplicate question was added as a comment to the original question, that would help with the searching issue. The alternate wording of the same question would appear on the same page and possibly come up as a search result.

If two questions are really exact duplicates, no reason why the answers could not be merged on one page (with respective votes in tact), and the duplicate title added on as some sort of alternative/secondary title for searching purposes.

I actually started following the recommendation of this question. Notorious as I am for deleting, I actually stopped deleting duplicate questions.

A little while later, I changed that to delete duplicate questions where the titles seemed sufficiently similar to the original. It made sense for the "extra" titles to stay around, as pointers to the original.

After a while, I got tired of that exercise. After all, the answers weren't getting merged together, so they were going to be effectively lost.

I'm now back to deleting duplicates along with everything else. When we get a better process for merging duplicates, perhaps adding a table of alternate titles to help search engines, then I'll go back to not deleting them.

611
Exit strategies for "chameleon questions"
5
Why are duplicates not being merged?
183
We should be able to close questions as duplicates of any question
365
New three-tiered badge idea: Explainer →Refiner → Illuminator
315
We're working on a new stat to help convey the reach of your posts here
410
Graduation, site closure, and a clearer outlook on the health of SE sites
2528
Firing mods and forced relicensing: is Stack Exchange still interested in cooperating with the community?
556
The company’s commitment to rebuilding the relationship with you, our community
584
We're switching to CommonMark
765
New Feature: Table Support