Do Moderators Need to Be Professional or Not?

I was surprised this evening that one particular moderator, who is this one, was completely unprofessional and exhibited substantial disdain to a fellow user on this website (myself). In short, I have had a small discussion here with some users about the benefit (and the harm) that downvoting does to a website. I expressed my personal opinion, and a moderator, who is "Cody Gray", claimed, that all moderators agreed with one user (that downvoting is good). After questioning whether there was a real consensus about this issue, I got the following ironical response from "Bhargav Rao":

There was a consensus meeting held yesterday in the mod room just to make sure that the moderators on Stack Overflow agreed with what DavidG said. We authorized Cody Gray to be our representative.

Of course, the point of the argument (whether anyone's point is right or wrong) is irrelevant, but the fact that 2 moderators intervened, where the first one claiming that all other moderators agreed with what one person said, and the second one stating that they met the day before said person commented and agreed that they will agree with his comment (that was not yet written), and authorizing "Cody Gray" to be their representative, indicates a level of non-professionalism that SO is sinking into. It seems that some SO moderators are not taking their mandate seriously.

My question is: Should such behavior be tolerated on SO? And if it's not, how do moderators address such situations where one moderator acts unprofessionally (who will moderate moderators? If it tolerated, then what is the limit? I understand that everyone wants to be "funny" from time to time and make other people laugh, but this is a professional site, and, IMHO, moderators should set an example.

The conversation is presented here, but exists currently in the comments section on rptwsthi's nomination: 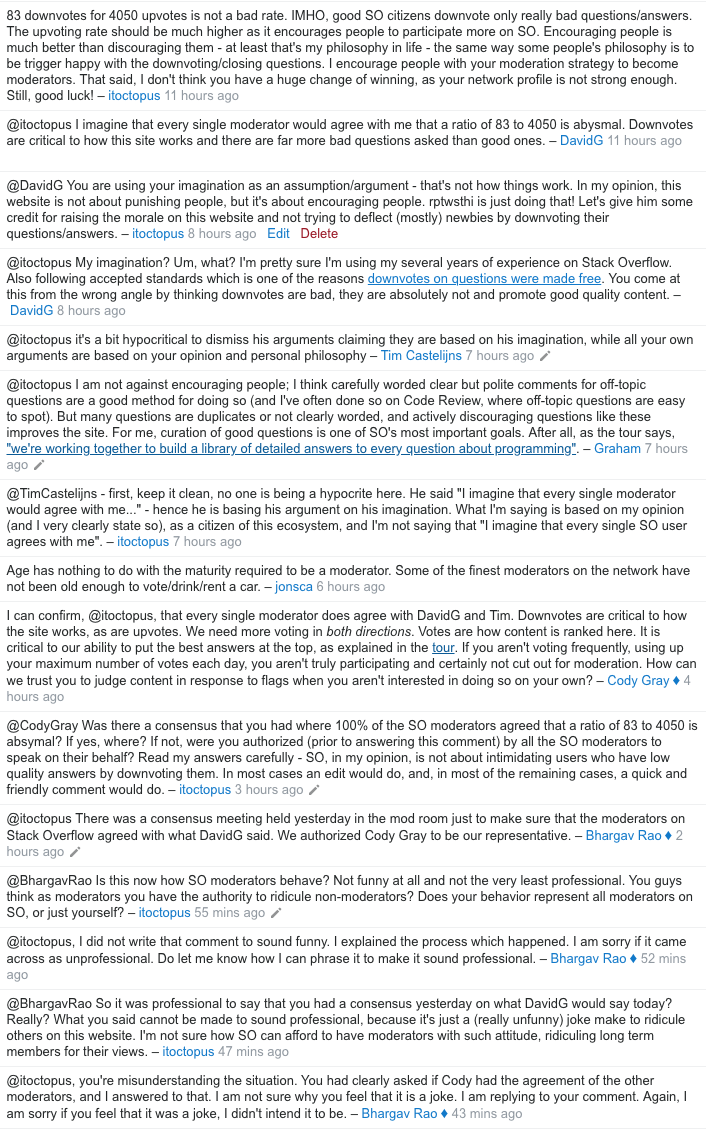 What I see here is a discussion about voting that probably should have moved to the election chat room before it went on so long and a couple of the moderators on Stack Overflow conveying the generally accepted belief that downvotes are an important part of content moderation across our network. While the 570+ moderators do not all share this opinion, I can easily accept that all of the Stack Overflow moderators do - and it would be easy to check by looking at their voting histories on their profiles.

We do expect our moderators to show professional demeanors and to act respectfully of other users. I've reviewed this several times and I don't see a joke here. I see conveyance of information - whether you wish to believe it or not - that is very likely accurate.

Our moderators do have private spaces to discuss these things and it's very likely that, because downvotes has been a major part of the discussion during this election, did have a discussion about it in the time since it was first brought up.

The first comment I see mentioning someone downvoting too much was on 5 March at ~6:00 Z in the comments section on Zoe's nomination. Even on the thread you're looking at there's discussion on 6 March at 8:01 Z, while DavidG's comment didn't show up until 16:25, eight hours later. For reference, I'm writing this on 7 March at 5:36 Z.

So, if you look at the full context of the nominations, it's completely plausible that the Stack Overflow mods had a discussion in their private room about downvoting. You seem to be missing some of the relevant points which may make these moderators seem somehow nefarious but all I see is a team of conscientious mods who have active discussions between themselves about the issues being brought to the fore during an election - arguably the busiest time for such things.

Moderators talk to each other a lot. We revisit decisions, talk about topics that are complex. Essentially part of our job is to ensure the health of the site in ways the mechanics don't always naturally help with.

Communication and delegation is part of a job. SO has 26 mods. That's 26 different voices and opinions, and having someone to speak for the moderation team is amazingly professional considering the sheer number and diversity of folks.

I also feel to a certain extent you literally asked several times if all the moderators agreed with downvotes being good - and someone mostly confirmed it. Part of the reaction is literally being told "yes, we actually feel that way" when you assumed otherwise.

More or less - its a response to specific questions you asked, and I can imagine conversations between mods on such topics simply cause we don't and can't work in a vacuum.

Not the answer you're looking for? Browse other questions tagged discussion moderators .

-9
Why are these comments considered acceptable on the site?