We're really close to launching custom question lists and we're extremely excited to be in the final phases of fine-tuning the back-end notification mechanism and finalizing all of the UX components. If you haven't been following along, here are two things you'll need to catch up:

There are many reasons for this, a lack of trying everything we could think of isn't one of them. In order for this system to be useful notifications have to work, otherwise we're just duplicating the ad-hoc feed readers folks are currently using.

Getting dynamic question lists and notifications AND everything else planned long-term for that space just isn't possible; it would be like paying off a high-interest credit card and running up a high balance again in a technical debt sense.

We want to put the lists in the left nav. We understand that, perceptively, it should seem easy for us to do it that way, but the reality is unfortunately that it's not.

The left-side navigation is a very important component for Teams & Enterprise users, but the dynamic nature of custom lists renders it a bad fit in the way things ultimately came together. We'd be stunting the feature by forcing it to live in a space where we ended up with more constraints than we imagined.

We're going to take over the right sidebar on /questions instead.

Details are still being worked out on what the actual design will look like, but the saved lists along with any notifications will be easily accessed on the sidebar on /questions and /questions/tagged/{tag}. For logged in users who see ads in the sidebar (i.e. users without the "Reduce Ads" privilege or users with that privilege who have opted to see ads), this means you'll no longer see the Community Bulletin (the yellow box that includes the "Hot Meta Posts" or "Featured On Meta" sections); your saved lists and indicators along with the UI for manipulating favorite and ignored tags will have higher priority. The Community Bulletin may come out of that view altogether, or move to the bottom (again, only for users who see ads). The important takeaway is, the yellow box gets the lowest priority.

If you don't normally see ads when logged in, the only major difference you'll notice is the addition of the custom lists and indicators, again, with the Community Bulletin losing priority. Essentially, we're optimizing /questions for the purpose that almost everyone has for visiting it, finding questions to answer.

This is our best long-term option, for a variety of reasons.

Another equally important reason for the change is, the left nav is very constrained when it comes to possibilities. While shoehorning something in there with a bit of patch work and silver tape is technically feasible if we take on debt, there's little to no room for features like question lists to evolve and mature in that location. Yuck, more debt!

Being in the left nav makes everything harder if you're a dynamic feature; having the run of the right sidebar in /questions gives you a lot of freedom to grow and evolve.

We wanted to have some screen shots ready, but we're not quite there yet.

We'll be very open to feedback (especially anything of an accessibility / HID mileage, etc) concern. We want to get the MVP out and in use, see how everyone ultimately settles on use, define the right use cases for iterative tests for when we make changes, and then we can go from there.

Our target ship date is before the end of the month, but we'll update if it's going to push more than a week into next month. We're launching this along with some other stuff waiting to go out as soon as all the cogs appear to be turning correctly; there will be more about it on the blog and some of the folks that worked on it will also be sharing their stories of working on the project on their personal blogs, which we'll link to.

All in all, it's coming out better than we envisioned, and we're really excited to once again be working with everyone on iterative improvements to really bring great tooling to folks that just want to find interesting questions to work on.

Questions? Thoughts? Please leave an answer below so any comments are easy to correlate and parse.

A large push for the left nav across the network was Custom Question Lists, seeing as you are no longer using the left nav for this will this space be used for anything else in the future?

I understand it is still used for Teams and Enterprise users but for those of us not part of these products there is a lot of space wasted so it would be good to know if there is a plan to use this space for anything else.

Since we have no current plans to make use of the left-nav column for anything else, but its presence is essential for SO/Teams, I'm re-raising a request from earlier in the left-nav saga:

feature-request: have left nav default to collapsed, not expanded.

If I have an account and am logged in, I can (and do) collapse the left nav using a profile setting. But if I visit a site where I don't have an account or am not logged in, I'm stuck with it. (These are things I sometimes need to do, particularly as a moderator.) With even slightly larger fonts or a non-humongous browser window, this squishes questions a lot. Further, it contributes to a terrible first-time experience for new users.

New users aren't likely to be looking for the questions list (as opposed to the front page they're on) and probably don't care about the users list, and it's only a special few who'll jump into browsing the tags list. We're not putting anything else there. So please default to showing more Q&A instead. If you also add a tooltip to the collapsed-nav control (there's none there now), you can make the left nav more discoverable without grabbing all that unused page-width. Or, if there's a concern that visitors with accounts won't think to check that hamburger, we could add wayfinding like you see on SO occasionally when there are new announcements that light up next to the logo, or like those in-page "tours" that some sites have. (Just make sure the user can dismiss it after reading it.)

Users with accounts can use a profile setting to enable the left nav everywhere. Experienced users will know that, and I'm confident that we can provide UI hints too. It looks like reversing the current default would maximize global utility. Please do it.

I'm quite confused by this change, there doesn't seem to be a big difference between putting the list on the left or on the right. The left sidebar isn't as wide as the right one, but I assume that is not the reason behind the switch. I also don't see how performance would be different, unless I'm misunderstanding the post and the custom question lists on the right sidebar are not present on every page.

The community bulletin is quite useful to draw attention to meta. That might not matter much on SO, but it can matter on smaller sites. Putting this in a less obvious position is not without consequences.

I don't understand why the "reduced ads" privilege plays a role here, as the sidebar ads are not affected by it.

And if the left sidebar is fundamentally not suited to displaying dynamic content, was adding it really the best way to fulfill the needs for the Teams feature? If you can't fill it with more content than it has now, it will remain a significant waste of space. Especially as it collapses last in the responsive design. And hiding it isn't a good option, the "Questions" item in there is probably my most often used navigation element, putting that behind two clicks is seriously annoying.

While I am also a bit sad that the left-nav was no possible solution (because it seemed to fit perfectly), I understand that you have technical reasons and I trust you that you attempted everything in order to put it in the left nav.

I have one feature-request though:

Please don't put the notification area (or however it should be called) at the bottom of the page when on mobile.

It is already tedious to look for community bulletin changes and I think that the notification feature will be used way more often than the bulletin.

Ideally, you would put it somewhere to the top or in some kind of menu (no idea, not an UX designer :P). I like how you did it for the /review page with the This site is moderated by you banner that floats to the top when on mobile.

I am not sure whether this is possible for technical reasons and I know that the core part of your change is to remove indicators from the left nav, but it would be really great if there was only a single indicator in the left nav that there are updates on any custom question list.

Not having this would kind of defeat the point of not updating a question list all the time to see updates.

Upon clicking the question link I would then be able to see the details (similar to how the review queue indicator works). 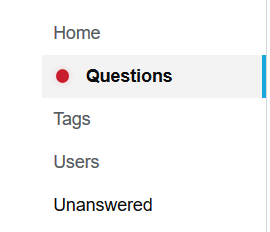 227
We're standardizing the sidebar width at 300px on all sites
2798
A Terms of Service update restricting companies that scrape your profile information without your permission
461
Network-wide HTTPS: It's time
230
Custom question lists: finding questions you can answer
383
Updating the Hot Network Questions List - now with a bit more network and a little less "hotness"!
223
Custom Filters release announcement
2521
Firing mods and forced relicensing: is Stack Exchange still interested in cooperating with the community?
2284
Stack Overflow is doing me ongoing harm; it's time to fix it!
764
New Feature: Table Support
415
Swag is coming back! (temporarily paused)