On the profile's activity tab there are reputation and badges blocks:

Could you please make these titles as clickable links to the corresponding tabs?

There is already link to the reputation tab from the chart, but there is no link for the badges. Using block titles as links would be intuitive, since I'm not a first time trying to click them with no effect.

For me here are all the links I found circled in red and the titles underlined in blue: 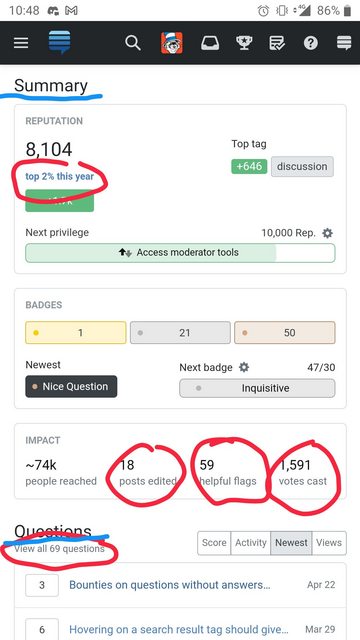 The text "View all 69 questions" is not only nice, but makes sense under the heading.

This breaks the UX, where previously Summary is the equivalent header and 'reputation', 'badges' and 'impact' have similar styling to the very nice 'View all 69 questions', it would be better to follow a consistent pattern.

Also, it's super unintuitive which bits of the UI should be/are clickable links (shown in freehand circles). I think that's the crux of the issue, and the OP has suggested a fix (make more things clickable) the alternative is to either make what's here clearer or make less clickable.

If I get time at work, I'll make a mock-up of what might be clearer and solve OP's problem without introducing clutter which seems to be Yaakov's concern.

Here is rough mockup to show something that might be a smidge clearer what's going on with links in the page:

While we're at it, let's also please make "reputation", "answers", and "questions" on the "Profile" tab clickable: 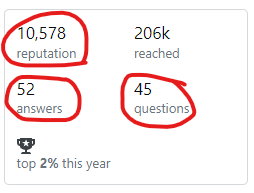 Preferably having the link for the whole div, not just the label: 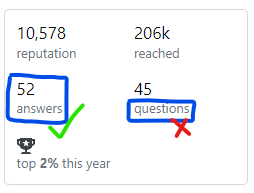 We are going to be declining this. There are already links to easily access those tabs in the profile, and we think that it can be confusing from a UX perspective to make these headers/subheaders/labels into clickable links.

Not the answer you're looking for? Browse other questions tagged feature-request status-declined design profile-page accessibility .

993
Show all of my question/answers to me even if they are deleted
41
The Badges icon should be linked (to badges)
222
Introduce a "general reference" close reason
419
Decision on rejected edits should be displayed as a notification to the editor
421
Add an "I don't understand" option for review audits
132
Profile Page Makeover, Part 3: the Prototype returns
258
Let’s improve our site navigation