What affects the visibility of a question?

I have been a regular user of the UX Stack Exchange website for about 2 years and I have always wondered about what brings more views to the question. And not just within the aforementioned site or across the internal network but outside as well.

I failed to notice any patterns as such but I did see strangely high traffic on certain questions while sometimes noticed no traffic at all for questions with great value and popular tags. Also, the activity on the question also seems to affect it differently. It makes sense for a question with 10 or 20+ answers to have a high view count. But questions with 1 or 2 answers also tend to have high traffic.

This made me curious as to what makes a question on this network "hot". Do certain tags improve the visibility? Does posting at a certain time matter? Or is it just completely at the mercy of the internet gods?

This made me curious as to what makes a question on this network "hot".

There is a certain score for that. Note that the question and answer(s) first must have some upvotes from the site itself before the question can become a Hot Network Question. After the hot network period ends, it's usually a matter of how often people Google for the problem. Somehow this Puzzling question of mine consistently gets about a hundred views a week.

Do certain tags improve the visibility?

That depends on the site. On large sites, definitely; on Stack Overflow, most people watch one or more tags and usually completely ignore the other questions. On smaller sites, you have more people who read almost everything, and an attractive (possibly even 'clickbaity') title is more important than tags.

Does posting at a certain time matter?

I doubt it. I've conducted some research a while ago about posting times and concluded they had no influence (the reduced traffic is compensated by the reduced number of questions vying for that traffic). But it could be that posting during the weekend or outside European and American office hours will make it hard for a question to compete with the ones already in the list. In 6-8 weeks, we will probably have enough data in SEDE to check, since a question becoming a Hot Network Question is now registered. Hopefully, this query will tell more by then.

Quite honestly? Sheer dumb luck. With 25K (or being a mod) you can actually find site analytics on your site at tools/site-analytics/traffic-sources/

On SU - which is one of the bigger/older sites, you'd find something interesting 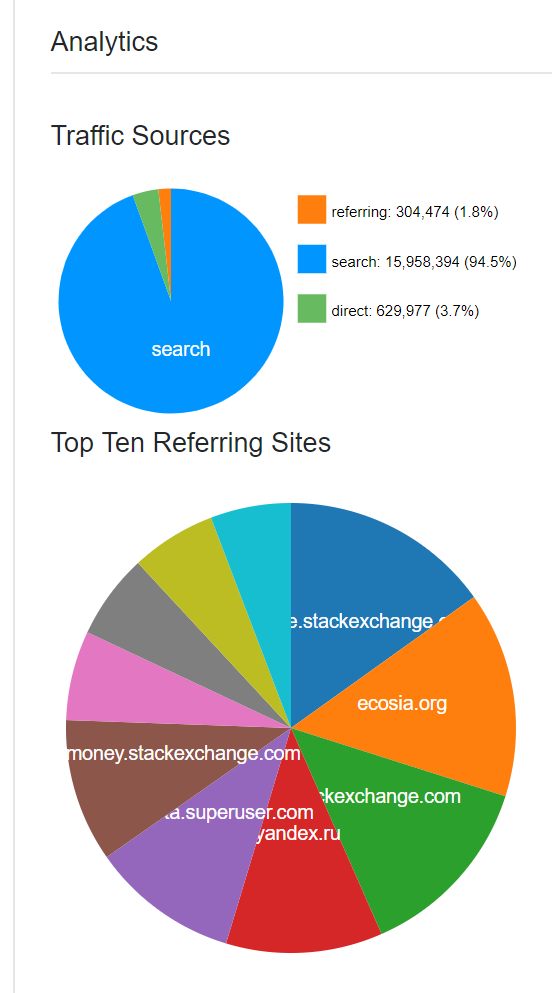 Optimising individual posts for search engine friendliness is a fool's quest so... well, its mostly luck ;)

Not the answer you're looking for? Browse other questions tagged discussion hot-questions visibility .

800
The Many Memes of Meta
106
What are the criteria for questions to be selected for Hot Network Questions?
68
Now you can know if a question really hit the HNQ
7
Is it likely for a question to have 40,000 views and only 2 votes? Or is this evidence towards a bug?

201
What formula should be used to determine “hot” questions?
1625
What is the XY problem?
395
Graduation, site closure, and a clearer outlook on the health of SE sites
448
Network-wide HTTPS: It's time
822
Net Neutrality and Stack Overflow / Stack Exchange
372
Updating the Hot Network Questions List - now with a bit more network and a little less “hotness”!
338
Let's take a look at the interaction between staff and the “power users” of the network
2285
Firing mods and forced relicensing: is Stack Exchange still interested in cooperating with the community?
1903
Stack Overflow is doing me ongoing harm; it's time to fix it!