Why can I bypass the duplicate-closure-prevention-system on some questions but not others?

Regular users cannot close questions as duplicates if the original question is unanswered (as per Stack Exchange definition of answered, i.e. answered and upvoted). If they try to do so they receive the following message:

This question does not have an upvoted or accepted answer.

I thought of a potential workaround for this. As a user with a gold tag badge I can edit the list of duplicates on a question. When I picked a random question that was already closed as a duplicate I did not receive the above rejection message when I tried to add the question that was unanswered: 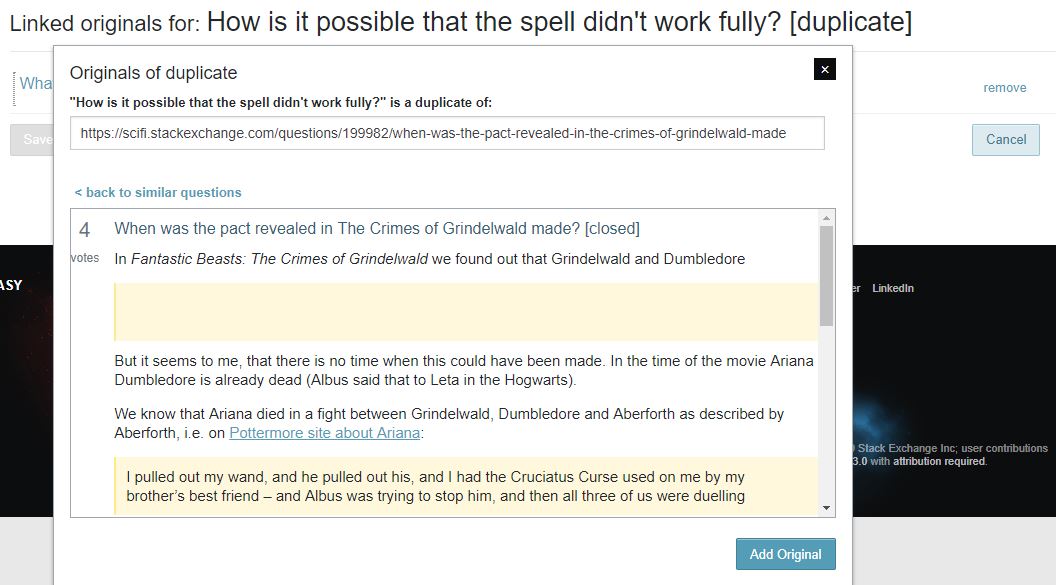 I was then able to click "add", again with no problem:

And I was even able to save it with no problem:

And this is documented in the Revision History:

And to complete the workaround I was then able to remove the original duplicate:

And this too is documented in the Revision History:

The above was all done on a test question. However, when I tried to use the same trick on the actual question that I wanted to close (since deleted), it didn't work. Since the question was currently open I had to first close it as a duplicate of a random answered question. That part worked fine. But then when I tried to add the unanswered question to the duplicate list I got the rejection message. (Sorry, no screenshots for this part because I can't recreate it since I can no longer vote to close the question since I already closed and reopened it.)

So the question now is, if this trick worked on the other question why didn't it work for this question? As far as I can tell, the only real difference (other than timing) was that with this question the original duplicate closure was done by me, whereas the other question was originally closed by others. Is that what caused the difference? If it is then I guess it solves the problem of a single user being able to bypass the system. But if it's not then what is the reason?

Note: This is not a bug report. This is a support question asking about how the system currently works.

In the first (test) case, both questions were posted by the same user.

Anyone can flag/vote to close as a duplicate to the same asker's other question even without any answers. This is usually applied when the asker reposts a similar/same question multiple times (i.e. exact duplicate).

I don't have enough information for the second (real) case, but I believe you're attempting to vote as a dupe of different user's question without upvoted/accepted answer, which is always prohibited unless you're a moderator.

723
How do I get attention for one of my own questions without a good answer?
604
How does the bounty system work?
450
Reward finding duplicate questions - +10, +2, -5
123
Can we make the title of duplicate questions say "duplicate"?
183
We should be able to close questions as duplicates of any question
187
Can we clarify to the OP that their question is not yet closed and the duplicates are only suggestions?
347
New UI encourages askers to confirm or dispute duplicate votes
336
Gold tag-badge holders and moderators can now edit duplicate links