All your sites are full with ads from a company I'm not interested in. Can I somehow turn them off? 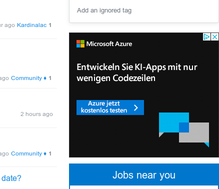 (Originally from the main page of the Android SE)

However, I am not really interested in Microsoft's products, and their flashing1 things about their latest, most wonderful offers are annoying me.

Using the "mute" feature of the Google ads, I reported them as "not interested", but it has no effect.

Can I somehow turn them off, but only them, without setting my adblocker? Your other offers (jobs, HNQ, etc) are to me okay.

Maybe it would require some Google settings?

P.s. If at least they would be static images... or they wouldn't do it so agressively... then this post hadn't been ever created.

1Actually, not the ads are flashing, but they are loaded dynamically by some JS (coming probably from Google). This delayed appearance looks like an animation. The images are static.

2Update: My adblocker plugin became somehow... ancient. After a refresh, all problem solved.

However, I am not really interested in Microsoft's products, and their flashing things about their latest, most wonderful offers are annoying me.

If you're seeing an animated ad served by Stack Exchange, you should report it. But that seems unlikely, because:

I refreshed the home page on Android several times and couldn't reproduce your report. Also, all the ads I saw were in English.

You are seeing a full quota of ads on the Android site because you currently have a reputation of 179 there, which falls short of their reduce ads privilege that kicks in at 200.

Once you reach a reputation of 200 you are able to Choose to see reduced ads or not.

Not the answer you're looking for? Browse other questions tagged discussion advertising microsoft .

80
Choose to see reduced ads or not

2
“Group” feature to share knowledge between developers
11
Is there any way to view specific HNQ side-bar advertisements or their base images?
378
If you're gonna talk Politics, you must respect those who disagree
349
Let's take a look at the interaction between staff and the “power users” of the network
301
Goodbye, Prettify. Hello highlight.js! Swapping out our Syntax Highlighter