Is it likely for a question to have 40,000 views and only 2 votes? Or is this evidence towards a bug?

I found this Stack Overflow question:

Error “Unable to use the video in an ad creative.

That has 40,000 views and only two upvotes shared between the question and answer. How did it get so big if no one ever upvotes it? (I checked the vote count, and it's not a controversial post with lots of upvotes and downvotes balancing each other.)

Compare it with this question, found in 'hot'. 25k views, over 200 total up votes across question and answer.

I can't think of a straightforward explanation for this except that it could be highly contested and the votes on question an answers have balanced out.

Is it possible this is a bug or abuse of the Stack Overflow views calculation?

After a bit of exploring in the data explorer I have found that yes this question is rare, but not alarmingly rare, there are ~80 other questions on SO like it.

As you can see for example here, almost all traffic to the Stack Exchange network comes from Google. Those are, for a huge part, anonymous users, people who aren't registered, let alone have the reputation to (up)vote. But their visits do count towards the number of views. (And by the way you're right: only two upvotes, no downvotes.)

I'd say it's normal for a Stack Overflow question to have such a view/vote ratio; at the very least more normal than the other example you found, which as you guessed has been a Hot Network Question.

I tried to dig up some numbers from the Data Explorer; unfortunately, a query like this one will time out on a database the size of Stack Overflow's. So I decided to check just the questions with 40.000 views (±10%), which can be done with this query: 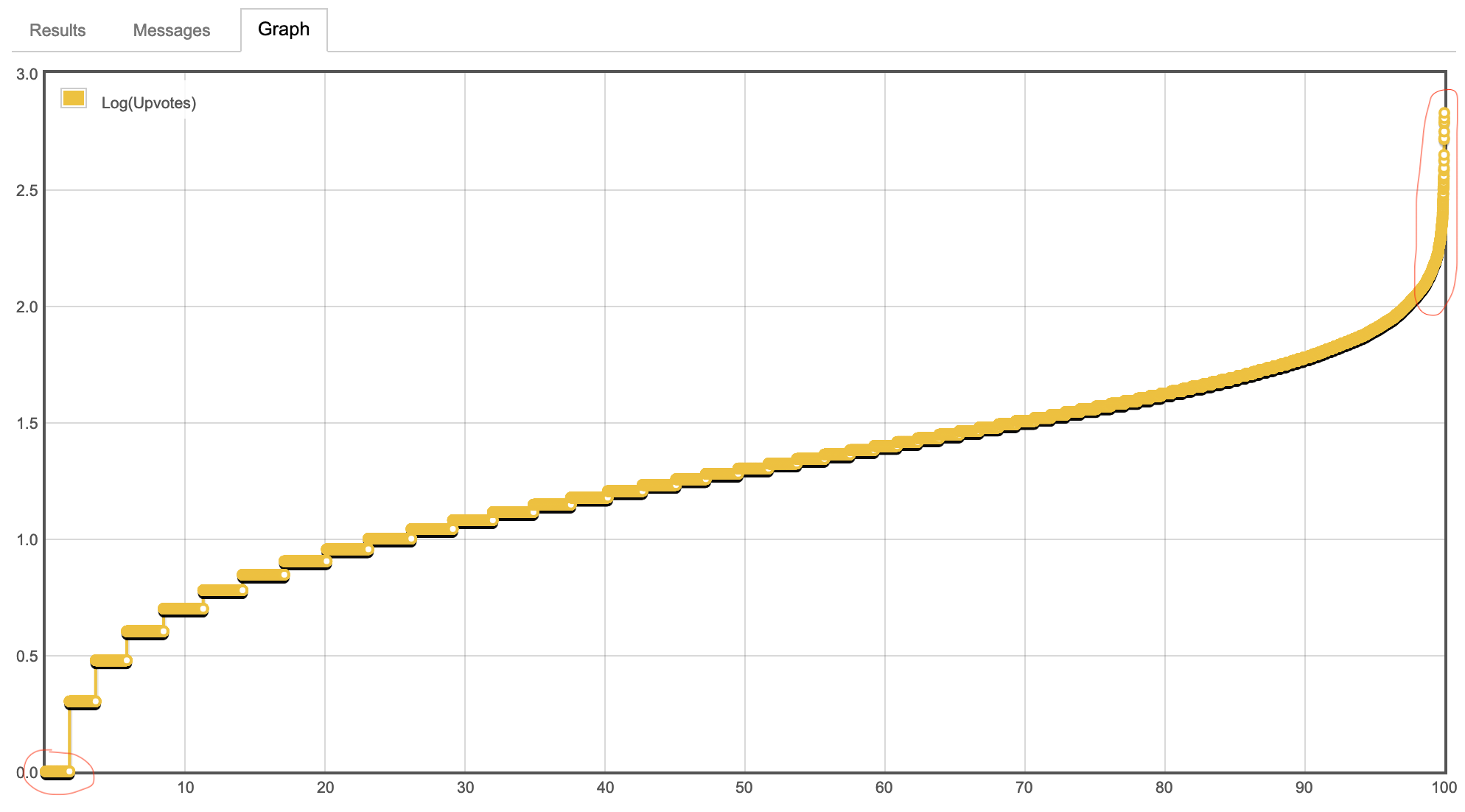 You see that questions with approximately that number of views and only one upvote (left freehand circle) are just as frequent (1.5%) as with 100 or more upvotes (right freehand circle). So, the two questions you've been looking at are two unusual, but not extremely rare cases.

Not the answer you're looking for? Browse other questions tagged discussion voting .

10
What affects the visibility of a question?

205
What formula should be used to determine "hot" questions?
183
The problem with extrinsic motivation
49
Moderator nomination possibly useful statistics
124
Community-led deletionism: a protocol for sanity
5
Is this old Question a candidate for deletion (or locking)?
305
We're working on a new stat to help convey the reach of your posts here
355
Let's take a look at the interaction between staff and the "power users" of the network
101
Has there been any discussion regarding the original stated reasons for the question up votes being set at +5 from +10 earlier?