Looking back at the Time Machine

This year Microsoft banned April Fools, which deprived the internet of their unique sense of humor as illustrated by Clippy and Windows 9. Stack Overflow and Stack Exchange users were not so lucky. Inspired by Captain Marvel, Space Jam and our own misspent youth, we inflicted a 90s theme on the network.

Judging solely by messages from former colleagues, family and acquaintances of employees, the theme was a hit. The cursor trail was especially popular. Twitter was generally into it, though a significant percentage of responses were annoyed with the distraction and a few noted they had to leave the page. Reddit had roughly the same reaction and Hacker News was a big old "meh".

Responses to my MSE announcement (+347/-48) and my MSO announcement (+863/-22) were generally pleasant to read. Several people suggested features that we did in fact include such as an old-school view counter (it was just our existing question view count restyled) and "Best viewed in Netscape" (way down at the bottom of the page). There were suggestions about how to make the page more authentic (more tables and frames) and the inevitable digging for Easter eggs (such as the ASCII art in the source). Some people thought the site was hacked and others seemed genuinely unsure if it was intended as a joke. Due to timing more than a few people wondered if the idea was from our next CEO.

Some people seemed quite angry with the page as they didn't want the distractions while trying to get their work done. In fairness, we launched with a bug that required users to turn off the feature on each page. While we did test the feature, it probably makes sense to reuse the toggle from previous years when possible to avoid this sort of error. (It should also be a network-account-wide setting.) I also suspect the sheer quantity of distractions on the page made finding the toggles close to impossible for some. If you are in the middle of solving some other problem and you have to try to solve our toggle puzzle, I can see being pretty frustrated with the whole thing.

This isn't our first rodeo. Some people will hate these events (either in principle or in the particular way we handle them). We still think April Fools is a worthwhile tradition. There's no real way to measure the unhappiness caused compared to the delight given, but there's no question in my mind we came up positive this year. Certainly room for improvement in the future, of course, but this year ranks right at the top of my favorite April Fools.

Since the goal of the prank was to be a giant distraction, I wondered how much the design would affect activity on Stack Overflow:

I think the other reason scores were down on new posts is that a higher percentage of the votes went to older posts than normal. Spot checking a few other large sites, I saw generally similar results. The design seemed to have distracted people from exercising their vote on new content.

The story is radically different on Meta Stack Exchange:

The event brought many more questions, answers (including on my question) and votes to meta. I don't think this is unique to this event, however. People just like to talk about whatever event is going on. Thank you to all the users who helped me handle the extra traffic on meta.

While we were running a April Fools event that took the site back to the 90s, CommitStrip published Back to how it should be: 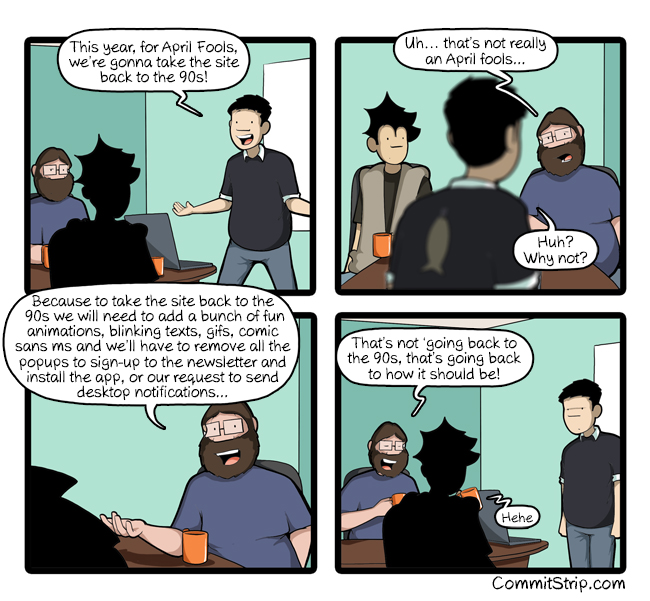 Now we don't think we ought to take the site back to the 90s, but one of the most common requests was to make the new theme permanent. If you are in that camp, I recommend taking a look at a stone arachnid's 2019 April Fool's Day Retro Theme for Tampermonkey. It really took me back to last Monday and beyond. If, like Catija, you just want the mouse trails, there's a script for that too.

We spent the better part of the previous year making changes to site designs. So far users have seen very little benefit since we took a short break from working on site designs. (We're finally gearing up again starting with Anime & Manga.) Now one of the factors for choosing this particular prank was to show the value of having a standard. With the exception of this bug, the changed theme worked the same everywhere: a crime against usability.

Thanks to everyone who enjoyed the 90s theme. While we do sell products and services, the true engine of our company is you, the community. Events like this are disruptive, but for a good purpose. Double thanks to those who endured the event. Hopefully it's been a relief to go back to normal. Fortunately, it's hard to imagine something we could do next year that would be more disruptive.

One of the benefits of doing this sort of recap is that it brings things out in the open that might not have come out otherwise. A colleague from the team that handles support emails (via the contact form) told me their experience was a bit different than mine. Most years support tickets on April Fools Day tend to be playful jokes riffing off of whatever we did for the event. This year was different. Our support team came back from the weekend with double the tickets they normally get.

Some people thought the site was hacked and were trying to report it. Others wanted to make sure their information was safe. Some people told us the prank was unprofessional and that they were leaving the site. The negativity in the helpdesk was so intense the team wished we could just turn off the joke early.

Indeed, the statistics from Stack Overflow alone show this was a much busier stretch of time than the previous week:

Deletions have gone down, which indicates users didn't make the ultimate protest, but we may very well see users not coming back to the sites in the weeks to come.

I'd like to thank our hardworking support team for shouldering the extra load. In my first few years of working as a community manager, I handled support emails one day a week and it is a thankless job. When people complain about the crap the see posted on the sites, I sometimes wish we could show some of the stuff we get via the contact form. Unfortunately the impact of this prank on their job just didn't enter my head until this morning. It's especially troublesome since I designed a feature that could have made a difference. We need to account for potential support spikes in future events.

I use Stack Overflow because it has far more data, which makes unusual events more obvious. Posts and votes just followed the normal weekly pattern, but traffic spiked higher than normal. It wasn't just new people; all sorts of visits increased. My guess is the vast majority of extra visits were simply gawkers and not going to be productive members of the community.

Thanks for the roundup, it was great fun for me and many people I've chatted with.

I do agree about the timing though, seemed a bit much for people on the far end of the world, 12 til 12 may have seemed a fairer balance, then again, many more casual users may have missed it altogether.. difficult balance.

If I knew how to train those greasemonkeys I keep hearing about, I'd ask them to bring it back for me!

I felt like the theme was a miss rather than a hit.

I suspect I encountered it earlier than most by being in Australia and when there was no obvious opt out I largely avoided my sites until normal service resumed a day and a half later.

I would just like to say, thank you for only leaving the 90's theme up for 2 days! I don't know how the internet would have survived if Stack Exchange was old-fashioned for more than that...

On the other hand, those two days were the most interesting and unusual days I've had on Stack Exchange. Never before had I seen so many sparkles and unicorns and colorful banners all in the same place. The image of the split unicorn has been permanently implanted in my mind. This was solid proof of how much we hate fun.

Not the answer you're looking for? Browse other questions tagged discussion april-fools time-travel-mode .

308
Announcing the Stack Exchange Time Machine
149
Ch-ch-ch-changes: Left nav, responsive design, & themes
100
How to disable "time travel" entirely?
19
Is it a prank or are we seriously looking for a new CEO?
30
Please don't repeat such an intrusive "full design" April's Fools in the years to come
59
What testing is done on 'April Fool' pranks?
15
Why does ELU get a special background for Time Travel mode?

1494
Fastest Gun in the West Problem
2793
A Terms of Service update restricting companies that scrape your profile information without your permission
2507
Firing mods and forced relicensing: is Stack Exchange still interested in cooperating with the community?
2258
Stack Overflow is doing me ongoing harm; it's time to fix it!
985
Firing Community Managers: Stack Exchange is not interested in cooperating with the community, is it?
554
The company’s commitment to rebuilding the relationship with you, our community
754
New Feature: Table Support
414
Swag is coming back! (temporarily paused)
723
Stack Exchange Public Q&A access will not be restricted in Russia