Why can't you vote to leave open after previously voting to close and reopen?

At this point someone voted to close it again as off-topic, and here's where it gets interesting. Normally, once you vote to close a question and it gets closed, or you vote to reopen a question and it gets reopened, you can no longer cast that same vote. Since I had already voted to close this question (as a duplicate) I no longer had the ability to cast a vote to close it as off-topic. However, I was also prevented from voting to leave it open as not off-topic. 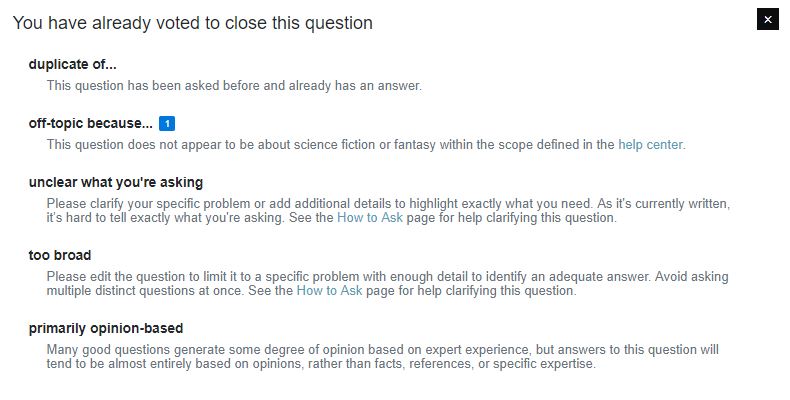 Why am I unable to vote to leave this question open? I can think of two possible reasons:

Yet neither of these reasons seem so logical. I voted to close the question for a different reason, so why should I not be able to vote that the current reason does not apply? (I suppose this could be tested by finding a case where someone voted to close and the question was closed and then it was reopened by other users and then sent to the Close Queue for a different reason.) If I can even vote to actually reopen a question that I have participated in closing, I should a fortiori be able to merely vote to leave open a question I participated in closing.

And if neither one of the above factors is a good reason for me to lose my leave open vote then the combination of them should also not remove my ability to vote.

(I tagged this as support because I want to know why the system is set up this way. If it turns out that there's no good reason, I suppose it can be changed to bug or feature-request.)

If you've already cast a close vote, you can't cast any further close votes on that question, and so it won't let you review in the Close Votes queue. (Reopen has nothing to do with it.)

On the one hand, you could argue that this is an oversight, since it is still potentially useful to Leave Open, and any items that should be closed can simply be skipped by those who already voted to close them once.

On the other hand, skipping is all too infrequent, and this therefore seems likely to lead to quite a few mistaken Leave Open votes, proportionally.

Reflecting on the actual prevalence leads to the inevitable conclusion: this is too rare a corner case to really be worth fixing. Most questions that were closed once by you don't need to be kept open by you specifically. If they're worth keeping open, they'll probably manage it one way or another. If not, time for meta!

"Voting to leave open" isn't really a vote on the closure of the question: no amount of "leave open" voting will keep a question from being closed if it accumulates the necessary number of close votes. Rather, it's a vote to kick the question out of the "close votes" review queue.

You've already cast your close vote and your reopen vote, so there's nothing left for you to do with the question.

See What exactly happens with the button "Leave Open" (previously "Do Not Close")?

Not the answer you're looking for? Browse other questions tagged support review vote-to-close vote-to-reopen .

61
What exactly happens with the button “Leave Open” (previously “Do Not Close”)?

514
How about a “Vote not to close” option to counter the “Vote to close”?
196
What is a “closed” or “duplicate” question?
569
How does the bounty system work?
311
Distinguish close votes by reason
61
What exactly happens with the button “Leave Open” (previously “Do Not Close”)?
250
The homework tag is now officially deprecated
4
Voting to Close after Accidentally Voting to Leave Open
341
New UI encourages askers to confirm or dispute duplicate votes
2395
Firing mods and forced relicensing: is Stack Exchange still interested in cooperating with the community?