Ask Question
Asked 3 years, 1 month ago
Modified 8 months ago
Viewed 321 times
-2
This question already has answers here:
Give 2k users a 'don't put this in the reopen queue' checkbox (3 answers)
Closed 9 months ago.

The community reviewed whether to reopen this question 9 months ago and left it closed:

Duplicate This question has been answered, is not unique, and doesn’t differentiate itself from another question.

This is not a duplicate of Give 2k users a 'don't put this in the reopen queue' checkbox. That request has been declined; this is a request to reconsider that decision.

There is a known issue of users editing questions that get closed recently after they get closed, for grammar. While the edits are themselves valid, they push the question into the reopen queue, and since they do not make the question reopenable, users (rightfully) disagree with reopening them.

The earlier declined request mentions wasted reviewer time and potential errant reopenings as arguments for implementing this, but I don't think that those are the main issues, since users are clearly happy reviewing them, and there aren't any errant reopenings as far as I've seen. The main issue, on the other hand, is that such edits deprive the post author (or anyone else) of the ability to have the post reopened as a result of editing. In many cases, the question may already be reopenable (in other words, the closure was invalid), but it's been shown that users fail to reopen such questions just because the edit is minor.

Considering that we don't let users know if their post has already been reviewed and rejected for reopening, if the user just blindly follows the guidance of editing their question in an attempt to have it reopened, if someone else has already made minor edits, the user will just be wasting time waiting for a potential reopening (which probably won't happen since it won't go into reopen review again). This can leave users dissatisfied and pretty stuck, forced to make a question on meta.

There have been proposals asking to make only author edits add questions to the reopen queue, but I disagree with those, since others can also be interested in seeing the post reopened. In fact, this was how the system was configured initially; it was later changed (for good reasons).

To address the original reasons for declining it, in the answer there:

we ignore [edits] where the editor has given some indication that [they don't] want the post reopened (voting to delete and flagging are pretty strong indicators here, so that's what we go with).

The edit privilege is at 2,000 rep, with lower-rep users able to suggest edits. On the other hand, it isn't possible to vote to delete unless the user has 20,000+ rep during the first two days after closure, or 10,000+ rep during the last three days of the "on hold" period (where questions can be added to the queue if they're edited). Also, the only flagging options for closed questions are for spam or abuse, or moderator intervention (in most cases, none of those are necessary). I think it's safe to say that a large number of users who perform such minor edits simply can't otherwise express they don't want to in the current system.

If you're making a lot of edits on posts that are closed - nominated for deletion - but which you explicitly do not want to see reopened... Then perhaps consider spending a bit less time rearranging deck chairs on the Titanic and instead putting that time and effort into other, more constructive activities.

I'd agree with this, but on several sites, we have one specific user who goes around and makes minor edits to posts, without regard to closure dates or the fact that they're going to push a certain post into the reopen queue. I've tried repeatedly notifying them in comments and in chat about this, but they have continued to make such edits. In my opinion, they seem to be clearly aware of the fact that their edits are pushing questions into the reopen queue, but are choosing to do so anyway, thus violating the quote above.

And even if we didn't have such a user, I'm sure that this may still continue to be an issue, given that we don't let users know that they will push the question into the reopen queue. In that case, it's quite possible that simply letting them know would make them reconsider and follow the quote, but the reality is that we do have a user who (I'm certain) will ignore it.

Also, to address a point in a comment which states that this should be dealt with on a user-specific basis since these users are violating the guidelines: the guideline itself is controversial, as there are other users that believe that "we shouldn't stop users from contributing edits [even if they're just turd-polishing]"; implementing this request would prevent this from being an issue and still respect the wishes of said users. We also don't make said guidelines clear anywhere.

In summary, can the original request please be reconsidered? I'd argue that the checkbox should be disabled by default so that users (especially those that use semi-automated grammar and spelling correction scripts such as the one used by that user) will have to explicitly indicate that they're aware of it before they can do so.

With the release Review queue workflows final release, we have included functionality that addressed this. Users editing closed questions will now be shown a box that allows them to indicate if the're making a minor edit or a significant edit (should be considered for reopening in the Reopen votes queue). 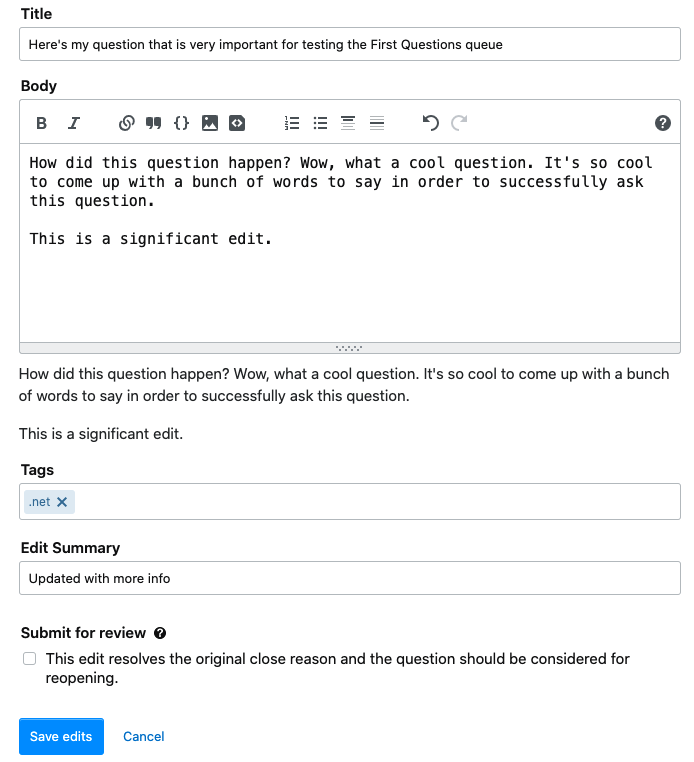 See the Changes to the Reopen votes queues section of that post for all of the details.

All in all, this makes me feel like this feature request should still be declined.

but it's been shown that users fail to reopen such questions just because the edit is minor.

The feature request you link to here is declined, and the answer says this is because people need to review the question as appears in the queue and not the edit. Getting people to do that is a totally unrelated issue and not a change of behavior that's likely to be achieved with a checkbox for putting questions in the reopen queue.

The main issue, on the other hand, is that such edits deprive the post author (or anyone else) of the ability to have the post reopened as a result of editing.

I think you brought this argument to the table before, in another declined feature request. From the answer there, Shog9 clearly says these cases rarely happen. There's a few numbers mentioned in the comments, they can be found in this post on MSO. Essentially, very few questions get two edits within 5 days. And of those that even get 1 edit, this edit is most often made by the OP. They aren't numbers about MSE or any other SE site, but I'm fairly confident together with the answer your declined feature request got, they're representative for a lot (if not all) sites.

and makes minor edits to posts using a script

So, this user that's so annoying to you is in fact not really 'spending time and effort rearranging the deck chairs on the Titanic', it's an automated script. The effort is made once to create the script, then it just ... runs. The analogy there seems pretty flawed. The script probably does more good than harm by fixing grammar, as edits to a post are sometimes even named as a way to let a user know we care about them and their post, and to get them to engage in further improvements of their question themselves.

but the reality is that we do have a user who (I'm certain) will ignore it.

We don't have a user who will ignore it. As you said, it's likely an automated script. You're right that script is likely to ignore this visual cue, though.

Both this and your previous argument seem to be in reaction to 1 script making edits correcting grammar, instead of a very large group of people editing questions for proper grammar. I know you really, really, really dislike that script, but this seems a lot like pushing for 'your way or the highway', where you either want to stop the script from editing on-hold questions (which failed as you couldn't get a hold of the author), or change the entire system just to fix one perceived problem (as I said above, numbers suggest it's not a problem at all) with that script. But it's probably not worth the time and effort to counter the effects of 1 script if there's not a huge problem with a huge group of people doing the same.

And how is a (new) user going to know they should check a checkbox to get their question reopened? You'd have to have more clutter, like a message/reminder/notification/prompt/explanation to check the box. If anything, I feel it should be enabled by default. I have no experience with UX design, but it feels more intuitive to place the burden of knowledge about closing, editing and reopening (and thus when a checkbox should/shouldn't be ticked) on more experienced users. This won't fix your problem with automated edits though.

Not the answer you're looking for? Browse other questions tagged feature-request status-completed review edits vote-to-reopen .

4
Give 2k users a 'don't put this in the reopen queue' checkbox
239
Review queue workflows - Final release
86
Changing the question reopening experience
52
How could we improve our planned post notice improvements?
153
How do you reopen a closed question?
42
Can we have the ability to flag for reopening?
25
How can we communicate to users who try and get their question reopened that the community disagrees with the reopening?
31
Let users editing a question know if editing it would add it to the reopen queue
12
Let reviewers know if a suggested edit will push the question into the reopen queue
3
Let reviewers know when reopen queue entries have been edited multiple times since closure
See more linked questions

1222
Encouraging people to explain downvotes
992
Show all of my question/answers to me even if they are deleted
417
Decision on rejected edits should be displayed as a notification to the editor
1245
Don't throw away all votes when a user is deleted
358
Reject an already-approved suggested edit when rolling it back
539
The current review system encourages fake reviews; some people upvote everything rather than actually fixing problems
391
The robo-approvers are killing my will to review edits
31
Let users editing a question know if editing it would add it to the reopen queue
188
Testing three-vote close and reopen on 13 network sites
239
Review queue workflows - Final release