Deleted posts could create confusion for colour blind users; is there something to be done about it?

I'm a mod on Game Development and today, in chat, a user has asked me to delete something they mistakenly posted as an answer instead of a comment. And so I went ahead and deleted the answer.

But then keeping chatting with them, I realized that they thought that deleting the post themselves would have it go into a queue of some sort until it was "deleted for real" since they still saw the post; they thought that asking a mod to do it instead would "delete it right away". Their confusion seemed to come from the fact that the red background of the deleted post, and red text saying it's deleted did not appear red enough for them, as they were color blind.

And running this example through a "colour blind filter" gives something like this: 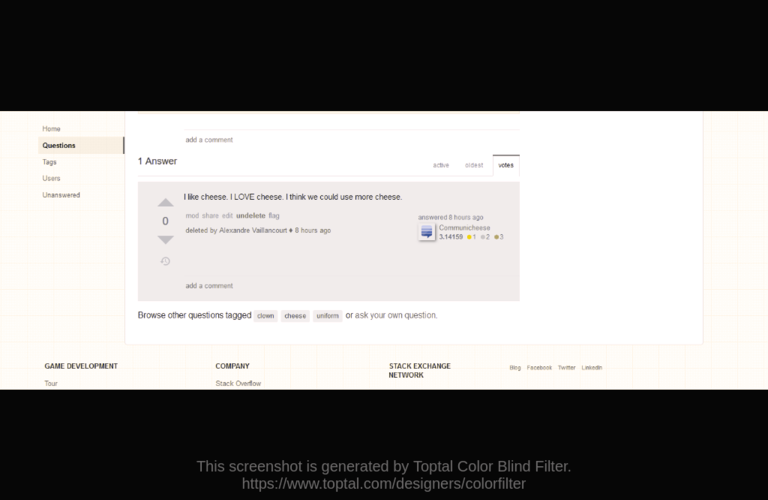 The rendered output is not the greatest thing ever, but we still can see that the red text is not really red, and depending on the monitor and the surrounding lighting conditions, the now "greyer" background could be harder to distinguish.

I don't know much about colour blindness, but I'm wondering if there is something to be done about this. This is one occurrence of this issue, and I don't know how widespread it is otherwise.

Although this doesn't apply to answers, questions that are on hold have [on hold] appended to their titles. 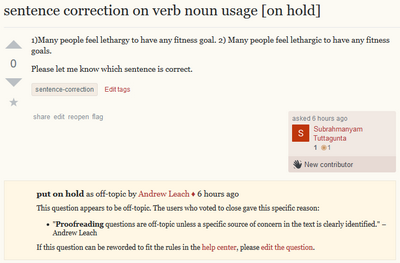 I don't see why questions that are deleted should not have [deleted] appended to their titles. (Granted, this would rarely be seen—but it's always seemed odd to me, for consistency if nothing else, that this isn't done.)

As for all posts in general (including answers which have no titles), we could additionally add [deleted] as an initial line at the top of the body of text—or just prepend it to the start of the first line of text.

If this were somehow done programmatically (or via CSS), then it wouldn't affect people who have self-deleted questions or answers, and who want to edit their titles or text before undeleting them.

Although relatively minor changes, I think these would sufficiently address this particular issue.

Note that while we indicate that the posts are deleted at the bottom of these posts, if they are long posts, that's not something that would be seen at first. Making it more immediately obvious by adding it to the top as well couldn't hurt.

Not the answer you're looking for? Browse other questions tagged discussion design accessibility .

30
Is Stack Exchange accessible for the blind and visually impaired and what can be done to improve it?

18
New background for deleted posts
730
Your answer is in another castle: when is an answer not an answer?
38
Make the moderator-only tags more distinct for colorblind users
2511
Firing mods and forced relicensing: is Stack Exchange still interested in cooperating with the community?
38
New highlighting is suboptimal for colorblind individuals
30
Is Stack Exchange accessible for the blind and visually impaired and what can be done to improve it?