Why was this question manually removed from Hot Network Questions despite already being closed?

I recently came across to this question (revision history). I saw that it was a Hot Network Question and flagged for moderator intervention to ask them to remove it from the HNQ and possibly delete it or lock it (historical lock) without knowing that closed questions are kicked out from HNQ list. [Note: what should be done about this question is another long story]

Up until now, the only recourse that was available was to close the question (which may be appropriate anyway but isn't ideal when done purely to manage traffic), or to do nothing.

Thus, we are sure the question was kicked out from HNQ. However, after some time it got reopened (wrongly, though). I am not sure if it became again a HNQ.

After the second closure of the question, when I came across it, I raised a mod-flag:

This blatantly off-topic question became Hot Network Question 13 hours ago. It needs to be removed (if it is not already) and might need deletion or a lock.

And I got as a response:

helpful - closed questions no longer go to the HNQ

After some time (and the second time the question was closed):

I am confused, now. Wasn't the question removed from HNQ when it was closed? Why did a moderator removed it, then?

Update: It turns out this feature was implemented after the latest HNQ announcement cf. rob's answer.

I experimented a bit on Quantum Computing SE (there were a few questions on the HNQ in the past one week). It seems that the UI allows mods to kick questions for the entirety of the 3-day period after a question gets promoted to the HNQ. So say a certain question gets closed on the second day after getting on the HNQ, it's still kickable from the HNQ for another 1 day. Basically, the kick is not only to remove it from the HNQ but also to prevent from getting on the HNQ in the remaining of the 3-day period (in case the question gets reopened).

For example, this question went on the HNQ yesterday and is now off the HNQ. However, the mod tools UI says that I can still kick it off: 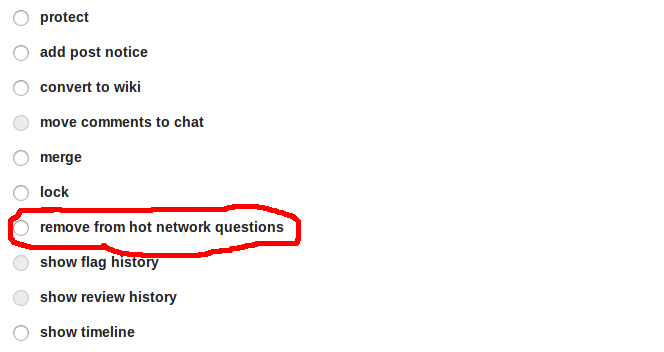 However, this question which was a HNQ on April 23rd, is no longer kickable: 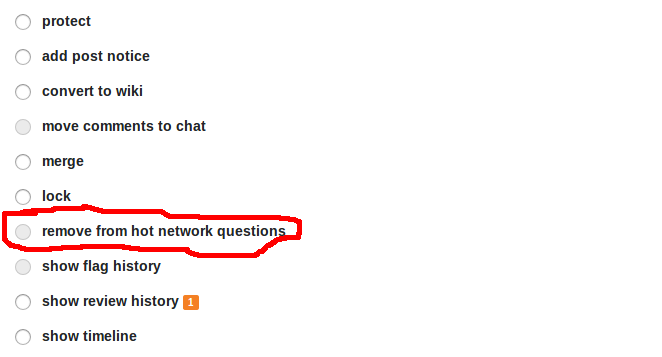 Notice that the checkbox for remove from hot network questions is greyed out.

All in all, I think this is status-bydesign. Most probably Bhargav's kick was meant to prevent the closed question from re-entering the HNQ again, in case it got re-opened in the future.

Not the answer you're looking for? Browse other questions tagged support moderator-tools hot-questions .

379
Updating the Hot Network Questions List - now with a bit more network and a little less "hotness"!
14
Do moderators have the ability to pre-emptively remove questions from the HNQ?

620
Formatting Sandbox
716
How do I get attention for one of my own questions without a good answer?
592
How does the bounty system work?
154
Prevent questions on the Hot List from being upvoted by casual visitors (only rep is from association bonus)
335
Gold tag-badge holders and moderators can now edit duplicate links
379
Updating the Hot Network Questions List - now with a bit more network and a little less "hotness"!
362
Let's take a look at the interaction between staff and the "power users" of the network
981
Firing Community Managers: Stack Exchange is not interested in cooperating with the community, is it?