Recently, Physics SE has finished the 2019 moderator election nomination phase. Earlier today, within 24 hours of the nomination completing, a user was removed from the nominations. The user later let us know that the reason was because of a short suspension, and the community managers had denied their nomination. (I am not disputing that decision in any way, it's the established process)

The biggest complaint is that this was somewhat jarring for the community, or at least the users discussing it at The h Bar (Physics Chat). It seemed as though there was a bit of a game of chicken going on with nominations, and having the user with the highest candidate score removed on the last day of nominations led to some confusion (and a bit of panicking with a couple users).

To mitigate this, I am wondering how feasible it would be to treat nominations from previously suspended users in a similar way to how pending edits from lower rep users are treated. This would mean that the nomination gets sent through on the nominating users end, but it is not visible to the general community until approved by a Community Manager(perhaps with a message like "This nomination requires approval from community managers, and will not be visible unless approved.").

It seems like this may not be a large project to implement, which is the only reason I suggest looking into it for something as rare as moderator elections.

How difficult would this be to implement, and would the feature be worth it?

I agree with Blue, in that it's "unfair and unprofessional to make previously suspended candidates fill up their nominations and answer the gigantic questionnaire, and then tell them that they're not allowed." And that's why, when a user is disallowed to run in an election, we show 'em this message: 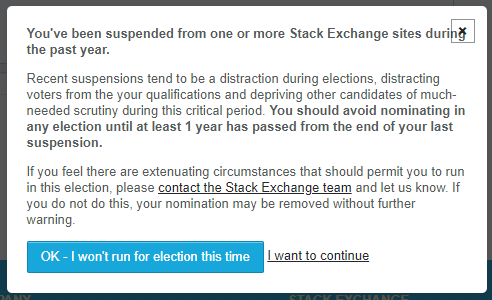 Granted, the user can still decide to run, and fill in the questionnaire... but even if we left the nomination as "pending" they'd still prolly be filling in the questionnaire somewhere locally to have their answers ready as soon as the nomination was approved by CMs (as per your request) — it's a good thing to be prepared when running in an election, and there isn't much we can do there.

Timing-wise, though, I'd add that since elections transition to the next phase on Mondays, we always need to do a final sanity check before that happens, which may sometimes cause some awkwardness. Furthermore, if a user who's disallowed to run nominated late Friday, it'll most likely only be noticed by CMs on Monday — we take weekends too! We can reassess whether moving these usual happenings from Mondays to another day of the week is reasonable, though.

We're pushing a fix to make the message look like this instead: 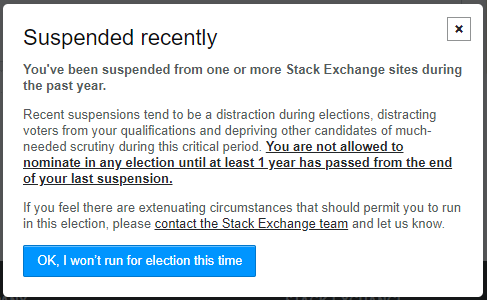 The new copy makes it clearer that users who see this are not allowed to run in the election, and must get permission from the Community Team to do so. It also links to the Meta post I linked to above that outlines our current policy on this, so users can see what "extenuating circumstances" can mean.

Thanks for writing this up. To reiterate what I said in the Physics chat: it's rather unfair and unprofessional to make previously suspended candidates fill up their nominations and answer the gigantic questionnaire, and then tell them that they're not allowed, just a couple of hours before the election begins. Such users should be blocked and clearly notified by the user-interface beforehand that their nomination and questionnaire answers may not be approved and may not appear on the site unless the community managers decide to make an exception for their case. Basically, make it a block-by-default system rather than an allow-by-default system, at least for priorly suspended users.

The specific case you have quoted was particularly poorly handled — we lost out on one of our top candidates (out of the only four who nominated for a two-slot election) just a few hours before the election. The sudden turn of events didn't even leave much time for the rest of our active and experienced users to reconsider nominating themselves. All in all, the Physics election was a complete mess this time. I sincerely hope that SE will come up with a more streamlined and transparent method to handle these cases in the future, like the one you mention.

277
Let's disallow moderator nominations from people who've been suspended in the past year
209
Who is on the Community Management Team, and what does it do?
73
My account has been temporarily suspended; what does that mean?
18
Make rules about candidate eligibility due to suspension more apparent
-10
Background checks on election candidates
7
Why don't we hard-prevent users from nominating themselves as a moderator candidate if they were suspended in the past year?
23
Election schedule: don't end nominations on Mondays
-8
Loosen the "no suspension in the past year" requirement for nominees, or at least listen to the community