Cannot vote to close a question as a duplicate because it would lead to a circle, except it wouldn't

I'm trying to vote to close this question as a duplicate of this one. The former question had just been asked 20 minutes ago, whereas the latter one was closed as a duplicate back in 2010 and hasn't been edited by a human user since 2011.

However, when I try to vote to close the much newer one as a duplicate of that much older one (which, by the way, is closed as a duplicate of two other questions that, obviously, existed back in 2010), I get an error message saying that my closure would result in a duplicate circle. This wouldn't be the case here.

I did some research using my 10k+ abilities, and found the following: 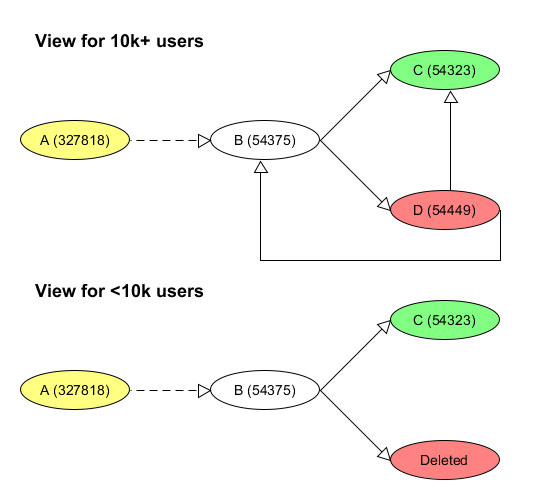 So it seems like there is indeed a circle, between B and D, which are both closed as duplicates of each other. But this circle is broken now that D is deleted; effectively B is now closed as a duplicate of only C, which means that my closure would be A -> B -> C, which is not a circle.

And even if D were to not be deleted, a circle between B and D shouldn't affect my ability to close A as a duplicate of B, because B also has C as a target, which exists and is open.

So effectively, the system seems to be overzealously blocking circles, even though there are ways for it to not be circles. Also, this would have been extremely confusing to a <10k user, as there would have been no way for them to figure out what was going on; I could only have known about the third bullet with my 10k-vision.

Can we please change the duplicate "circle" checker so that it does not give the error message if there is a way for a certain duplicate path to not be a circle, even if there does exist one circular path? In other words, only give the error if the only possible paths are circles? Or at the very least disregard deleted posts when calculating circles (the system now blocks humans from deleting duplicate targets, but there are older cases like this one where it wasn't blocked, and it can still happen as a result of Roomba deletions)?

You're only looking at one specific case here, where you want to create a line from A to B to C and ignore the B to D to B circle. Problem is, that's not the only case where a circle could exist.

What if D already pointed back to A? We should allow it to go through because A to B to C is still not a circle, even though A to B to D to A does create a circle encompassing the current question? Certainly we shouldn't allow that...

The correct thing to do in this situation is to break the circle that exists, not to just ignore it. That may be annoying when the circle already existed from times before we prevented them, but that doesn't mean we need a bypass for pre-existing circles.

The best solution in this particular case is to simply reopen B and reclose it as only a duplicate of C so that the link between B and D breaks and the circle no longer exists and, hey, one question no longer points at a deleted duplicate.

Not the answer you're looking for? Browse other questions tagged bug status-bydesign vote-to-close duplicate-questions .

6
Why I am getting an option to start a bounty for a question with accepted answer?

554
How about a "Vote not to close" option to counter the "Vote to close"?
337
Distinguish close votes by reason
12
Close as duplicate circle detection bug
138
Don't delete comments with link to duplicate if they are modified
256
Increase close vote weight for gold tag badge holders
347
New UI encourages askers to confirm or dispute duplicate votes
336
Gold tag-badge holders and moderators can now edit duplicate links
189
Testing three-vote close and reopen on 13 network sites