The Boardgames Stack Exchange question How would an instant or sorcery with an effect that targets work with Feather? became a Hot Network Question three times, according to its timeline: 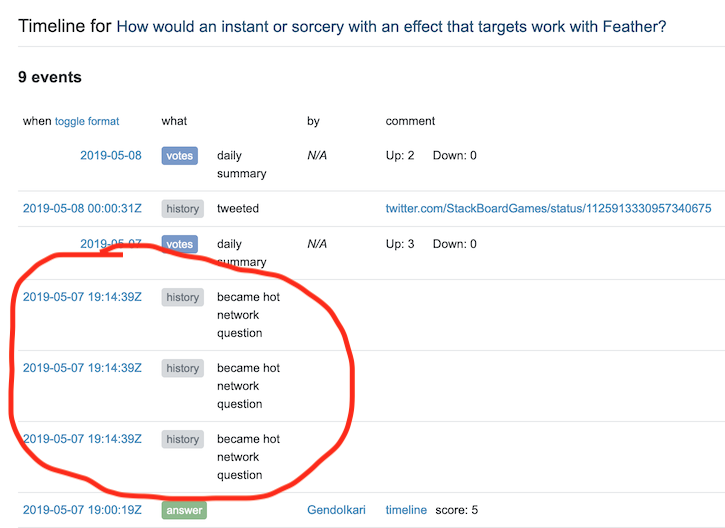 All three events have the exact timestamp (19:14:39 UTC - shown when you click the 'toggle format' link or upon hovering) so it's probably a race condition or something.

It's not a unique case; this SEDE query finds instances on a single site, and this cross-site query lists all occurrences in the network (currently 448). The current record holders, with 44 HNQ entry events, are

The underlying issue here has (hopefully) been fixed. Extra post history entries have been removed.

The cause was a race condition on the hot network questions global cache:

Not the answer you're looking for? Browse other questions tagged bug status-completed hot-questions timeline .

14
Why does this question have 26 "entered HNQ" revision entries?
13
Can a question "go hot" multiple times within three seconds?
3
Why has this question become hot twice within a few seconds of interval?
378
Updating the Hot Network Questions List - now with a bit more network and a little less "hotness"!
117
What are the criteria for questions to be selected for Hot Network Questions?
9
How hot? Double hot (bug resurfaced?)