Color for new events in dropdown is too light

Whenever I get new reputation events, badges, or comments I end up scrolling too far because the highlight is too light. See for example in this image:

The regular background is white (#FFFFFF) and the highlight is very light blue (#F0FBFF). At some angles, they are the same color.

I also have this problem on the app (iOS).

I don't know if the color can be changed enough to make a difference without messing with the site icons, but it should be possible to add a colored left border if that is the case. For example, my email on my phone puts a blue dot next to unread emails so it looks something like this:

I agree in principle that something should be done to address this contrast issue, in particular for those who do have problems distinguishing the colours. However, it's not as simple as just darkening the light-blue highlight.

(If you want to skip past all of my analysis, my suggested highlight colour is at the bottom of this post.)

The WebAIM Contrast Color Checker is a tool for determining colours to use for acceptable levels of contrast between background and foreground, based on Web accessibility standards.

If we think of the regular background colour as background and the highlight colour as foreground, this produces a contrast of only 1.05:1, not enough for some people to clearly distinguish between the two. 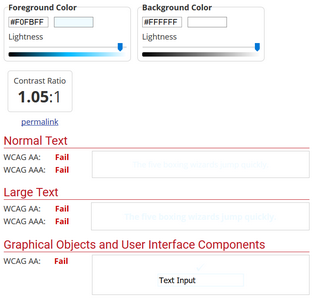 Unfortunately, I can't input the target contrast ratio I want with the tool, and I have to rely on a slider that isn't precise enough. However, for the point of argument, I have adjusted the contrast ratio to 4.7:1 (slightly above what the site indicates is the minimum for accessibility).

This darkens the highlight colour to #007DA3. 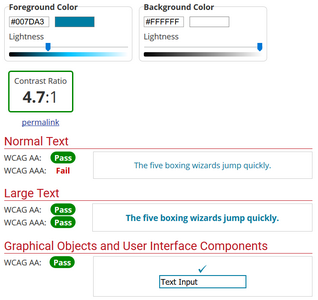 To me, this seems excessive for a temporary highlight contrast rather than a permanent contrast of foreground font colour against background colour. 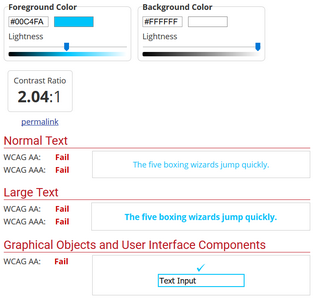 This seems more reasonable. But there's now another problem.

The darker highlight colour, while now distinguishable enough from the normal white background, results in there being a lack of contrast between it and the blue font itself.

What does this tell me?

If we darken the light-blue highlight colour to more easily distinguish it from the normal white background, we end up causing a problem with the contrast between the font colour and the new, darker highlight colour.

In short, I think the only way to address this would is to have a highlight colour that isn't blue but something else.

If I go by objective methods, the Colour Calculator at Sessions College for Professional Design suggests that the complement of #3969A4 is #a46239. 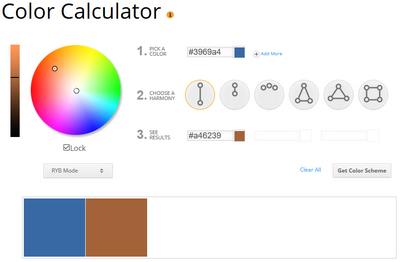 Assuming that this brown is the correct colour complement to our blue, it needs to be much lighter in order to meet the contrast ratio requirements.

Returning to the WebAIM tool, it indicates that the correct highlight colour to use for our blue font, based on the complementary brown, is #F3E4D8. 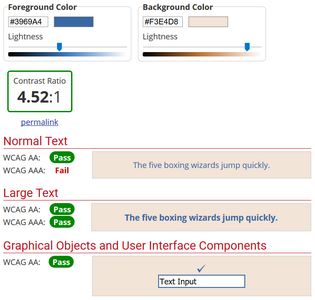 As a final note, the contrast between this colour and the white may not be sufficient. It seems it's impossible to account for both the text colour and the neighbouring white in contrast to the highlight colour. The #F3E4D8 could be darkened slightly. (But it seems to me that this brown is more easily distinguishable from the white than is the existing light blue.)

120
The reCAPTCHA has become too difficult for humans to solve
62
Checkmarks on new SE sites are inconvenient for red-green colorblind users
22
Moderator message notifications should be red in the global inbox for those involved
4
The highlight color used for updated favorite questions is too light to see
26
Modulate the review notification's color to reflect changes, or make it dismissible
86
What is the idea behind the new top header icon color?
48
In the new top bar, the moderator diamond no longer changes color to indicate new inbox messages