This (old) post about how to gain rep fast by essentially being anti-community seems like it should have been removed long ago. Why has it been allowed to stay around all these years? I'm assuming it's because the answers are legitimate, and seem to highlight ways of being a good member of this community, but if that's the case then shouldn't the question be edited heavily to remove the references to ridiculous practices which undermine Stack?

Is it just a big joke? If that's the case then it's not obvious enough to warrant not editing it.

For sure this gets found all the time and people think the community is encouraging them to answer questions fast, even at the expense of quality, and then downvote any other (better) answers just because it makes their answer look better.

Just wondering if some senior members of this community have some opinions here...

Well, in this specific situation - the locking reflects that the post has historic significance but no longer reflects how we do things. Being locked, its unlikely anyone's taken a good look at it lately, since it can't be bumped.

As such, no one's seen it since Jeff locked it in 2017, and while Jeff's had a great influence on the site in the early days (as the CEO for the first couple of years, and a pretty active user), he doesn't have a direct influence on site policy, and his views don't really reflect SE (the network) or SO policy these days.

If we do keep the post - it's an example of youthful silliness (and many,if not all of us, have done silly things).

Stuff like that is tricky. We need to balance between having people find things that are relevant to the current norms and culture of the site, and the risk of erasing/losing our history, cause this was the sort of thing we did once.

The historical lock is a reasonable compromise that lets us keep our historical posts, while letting people know this isn't how we do things anymore. The latter is just as important. We might end up reviewing that (either us volunteer mods, or a passing community manager) and choosing to delete it, but at least for now, this kinda works for us.

I'm of the impression that the cynicism in the actual question itself is being drowned out by either angst or frustration in this present day and age.

No, that question is not a joke. It was a valid question back when it was posted, and it's being kept because it has a useful answer that is still very legit and relevant these days.

Screenshot of the answer in case the question gets deleted at some point: 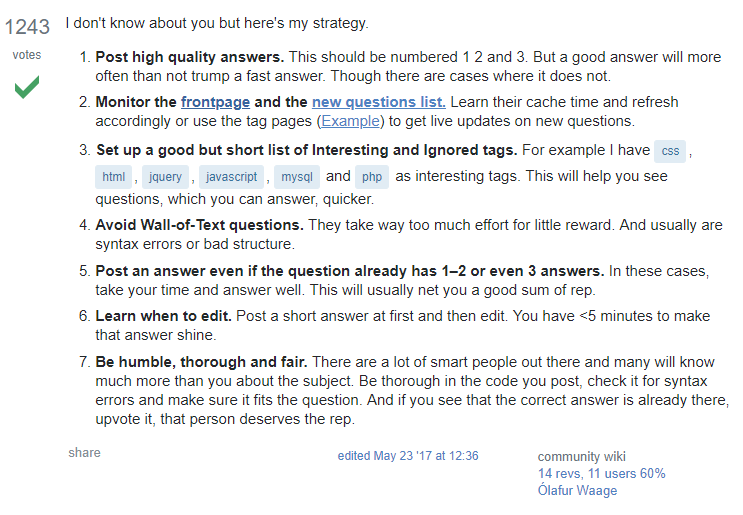 Some of those tips might not be great, but others are really good, and not trivial at all.

I do agree most comments and other answers are jokes, and won't be bothered if they're removed.

Not the answer you're looking for? Browse other questions tagged discussion meta locked-questions .

987
Should 'Hi', 'thanks', taglines, and salutations be removed from posts?
319
Stack Overflow is getting a Meta of its own
631
Your answer is in another castle: when is an answer not an answer?
375
If you're gonna talk Politics, you must respect those who disagree
820
Net Neutrality and Stack Overflow / Stack Exchange
2211
Firing mods and forced relicensing: is Stack Exchange still interested in cooperating with the community?
385
Why taking responsibility for other people's feelings doesn't work