Note: I am aware that this issue was reported many times for at least 9 years. However, it is still not fixed, and I created a hack to fix it.

Just for fun, I rendered my nickname in NKo script that happens to be RTL one.

However, RTL nicknames make havoc being composed into a list along with LRT ones. For example, a question where I cast a close vote[archived] got the following note and a history entry:

Notice that a nickname 0xdb was broken into two parts, interleaved with my nickname, as well as its comma.

HTML markup shows that two names are wrapped into their own <a> tags: 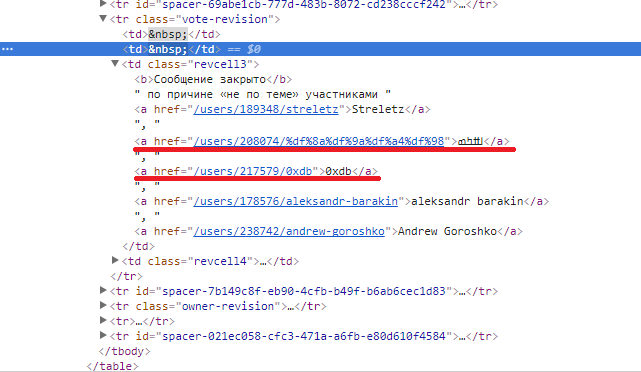 By default, <a> tags are inline, so they do not affect rendering. However, when I turned links into isolated blocks via display: inline-block, it broke a character stream and fixed the issue:

Unfortunately, this hack helps only in places where inline wrappers are used. To properly fix the issue, U+200F RIGHT-TO-LEFT MARK and U+200E LEFT-TO-RIGHT MARK need to be inserted when script direction change is detected.