The achievements dropdown doesn't light up for negative reputation changes, but until today, if you downvoted an answer and then opened the dropdown, you'd see an entry for that downvote. It would show as "-1" (in red) with a link to the answer you downvoted.

Today that entry is missing. In the following screenshot, between the badge and the next positive rep event I had cast a downvote, but it's not there. It is on my profile reputation tab, so it's not a general failure of reporting -- it's just the dropdown. 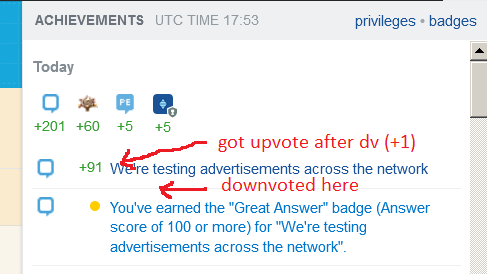 Could we have this back? I'm used to that dropdown including all events even if it doesn't produce alerts for all events. It should include bounties given, rep changes from removed users, my own downvotes, and anything else that changes reputation.

("But can't you just check your profile?" Well, if I were active on only one or two sites, maybe...)

Update: seems to have gone away (or been fixed) now.

15
Positive AND Negative reputation show as +-1

1108
Encouraging people to explain downvotes
219
Should the weight of downvotes be increased?
31
Deleted downvotes should appear in Achievements dialog
37
Ignore the rep change caused by placing bounties in the achievements reputation indicator
13
Achievements label continues to be confused
39
Why do reputation drops not highlight the Achievements icon?
5
Achievements dropdown and profile don't agree on rep change from removed user