As hopefully most moderators are aware, we've been working over the last few months to revamp the moderator flag dashboard. After running a small and then wide alpha, collecting and addressing plenty of feedback along the way, we're officially launching the new design mostly.

We like the new design, we think it makes more sense, will be easier to build on, and is just more pleasant. That said, today might not be the day for you to try a new moderating tool. You may be under a spam attack or cleaning up a bunch of nasty comments from someone's unfriendly bot and a sudden change could mess everything up. For the next few weeks, you will be able to use the old UI by deselecting the "Admin Dashboard Refresh" checkbox on your site's /users/preferences/current.

But please don't unless you have to, and please switch back when you have the bandwidth. The new dashboard is the shipped product, and the old one won't stick around forever - if something's blocking you from using it, we need to address that not ignore it! 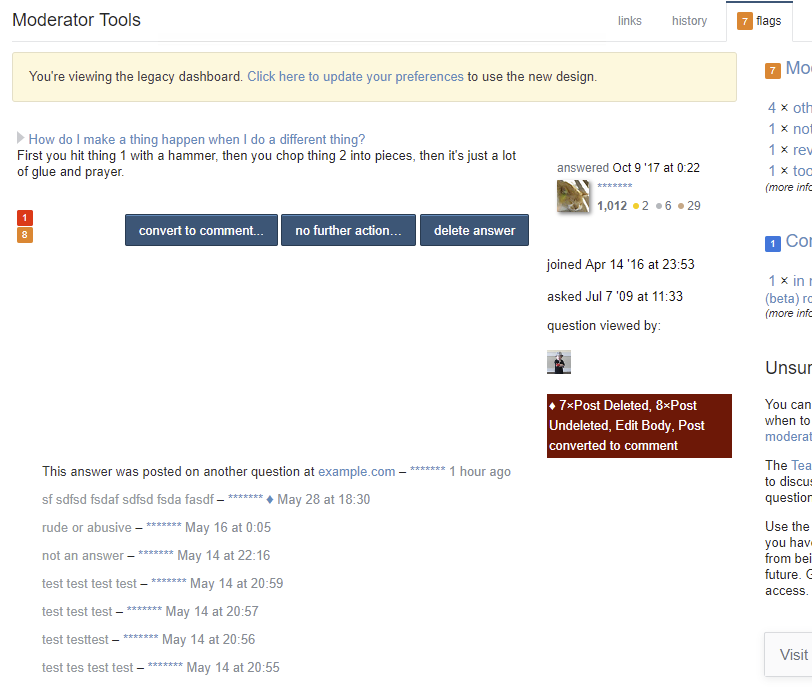 Beyond appearances, there have been some thoughtful reworks:

There are some additional improvements over what shipped last month:

I've reached out to the international team with the (mostly accurate) list of recently introduced strings that need to be translated for this feature. The strings and hashes are available in this Google sheet.

At the end of July 2019, we will review feedback we receive and run additional rounds of interviews. After this, we expect to share an updated timeline on when the legacy UI will be decommissioned. If everything is relatively minor, we would aim to turn it off as early as early August.

Since we are officially out of alpha, all bugs and feature requests should be done in the form of questions tagged flag-dashboard on MSE, not answers on this post. Feel free to post an answer here if you have specific concerns about the release process.

First off - I love that you're rethinking this. There's some great data being exposed, but I want to challenge you to have someone to take an axe to the layout - the headers and fluff at the top.

The process you list doesn't say anything about mobile, but comment if you want me to raise this as a new thread / FR instead of answering here.

Now to the request / complaint / call to add a mobile view, let's count pixels in the image below:

I'd say keep the black top bar and I love the 12 pixels high rainbow - please keep that.

Kill all 402 pixels of Ask Different banner - I know which site I'm on.

Better yet, put the site logo in the top next to my mod diamond if you're not seriously invested code wise or branding wise in keeping the SE logo to the right of the hamburger control icon.

Moderator tools and the two rows of items - I know I'm in the moderator tools - kill all that and put migrated into posts, please. Anything to get the tabs to one row and not wrapping.

Tons of white space and a "new banner" I'd love to see all of this go away on iPhone view.

The total image is 2436 pixels and the content I'm there to look over gets 694 pixels on screen (so 28% content and the rest is affordance, blank space navigation and chrome). What would this look like if you got 70% of the space showing content and 30% showing the portions I critically listed above as too prominent?

Again, super happy we're getting a look, but this interface is really poor for checking in on my pocket computer (iPhone) and handling some flags. Would be interesting to see how lean you can make this and how desktop view feels as well. I could see what's ideal on mobile really be inconvenient on desktop, but why not experiment a bit with a 180 in terms of content to header areas for a couple weeks?

I don't see a way to leave custom feedback on comment flags, whether I delete the comment or decline the flag. I had an issue on my site where I wanted to respond more than just "helpful" and was unable to do that.

What's missing here, in this case, applying to a "not an answer" flag, is the ability to add a comment, typically "welcome to Money.SE, this is not an answer to the question above, please post as a new question."

Note: this is different from Mooseman's answer. I wish to leave the comment on the answer (not an answer) before hitting delete.

For posts which are flagged with "too many comments," it would be nice to be able to expand the comment thread without expanding the entire post.

After I've moved the comments on a post to chat (usually in response to this flag), I usually keep the post in the flag queue for a couple of days to watch for users who are trying to re-start the discussion in the comments. If I expand the question using the > button, I can tell from the

line under the post that I don't need to look at it any more for now. But expanding the post moves everything on the screen and renders a bunch of things that I'm not interested in.

This particular use case might be better served by deferred flags (rejected in 2011, reconsidered in 2014), but I feel like there have been other moderation tasks where I've wished for a quicker way to skim the comments on post. For instance if the "add a comment" part of the comment information line were a visible and functioning item on an un-expanded post, that would also solve the issue raised by Joe Taxpayer in another response to this question.

It would be nice if the bottom option bar went away when you open the helpful or decline windows. Your eye is naturally on the right side of the screen after clicking Decline... and it makes you naturally go towards the options that are not related to the decline options rather than the correct set of options on the left of the screen.

This might have to be limited to only happening when working with the last item for review or when there is only a single one, but making it so that the action buttons are more context aware and flow better would be helpful.

I have tried to use the 'delete answer' option first time today, still had to hand delete (as I usually do) as it did not work.
I have no problems on the mobile but on the full screen laptop version I get the bottom bar across the answers, with several flags it covers most of the answers making it hard to see what is to be deleted. But then when I want to use it, after deleting the answer to mark the flags as useful, that option disappears and I have to go back to an other tab where I have the list still open.
Either do not put the bottom bar on the website version (preferred) or keep it till the mod clicks to close it, so it is useful.

(But to tell truth, I loved this version from the start and never went back to the old one from day one.)

Not the answer you're looking for? Browse other questions tagged discussion moderator-tools flag-dashboard .

25
Moderator Flag Dashboard hard launch
781
Recent feature changes to Stack Exchange
64
Moderator flag dashboard design refresh (alpha)
37
Moderators should see the post as I flagged it, not the edited version
45
Can we have a feature to delay a flag for a short period of time?
13
Flag declined after an edit. How can we fix this?
18
What do the moderator tools and pages look like?
5
Please announce changes like the new design of the bounties
21
Can we show when users were last seen on the mod flag dashboard?
2
'Undelete post' button in moderator flag dashboard on iOS lacks styling
See more linked questions

521
Global auth is dead! Long live universal login
2779
A Terms of Service update restricting companies that scrape your profile information without your permission
412
Can a machine be taught to flag spam automatically?
64
Moderator flag dashboard design refresh (alpha)
444
Employee profiles are now marked with a “Staff” indicator
2433
Firing mods and forced relicensing: is Stack Exchange still interested in cooperating with the community?
578
We're switching to CommonMark