The user page includes link to a summary of flags raised and what happened to them, like this: 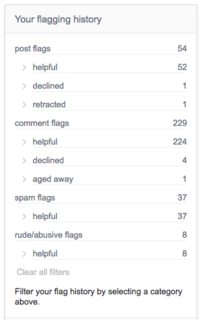 The links in the summary make it easier to find or review particular flags or groups -- very helpful!

Similarly, the flags dashboard used by moderators has a summary of active flags: 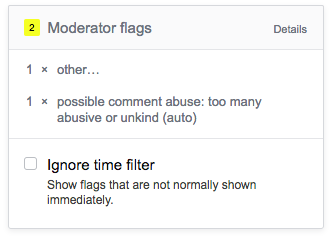 There's one other place where flags congregate. As with the dashboard, it's only visible to moderators. Unlike the mod dashboard (on my sites), it often has more than a few entries. I'm talking about the list of flags raised against a user. Could we have a summary there too? There's room and it'd really help for certain types of issues. I mean something like this: 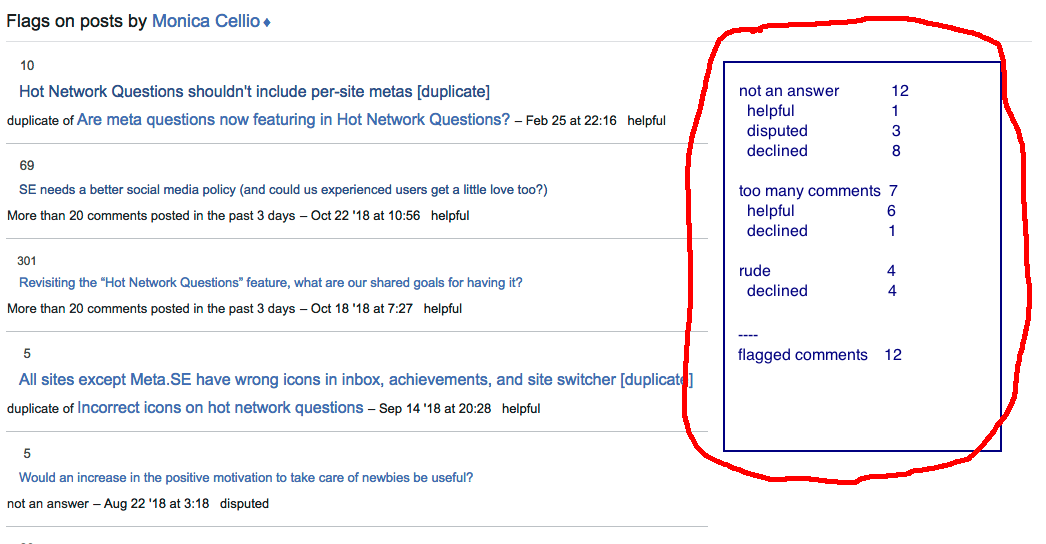 I grouped flagged comments together at the bottom because we have a page for that already, so you could just link to it. If the flags were helpful those comments aren't going to be on this page anyway. (Also, these numbers are made-up, in case anyone's wondering.)

Right now we see a total number of flags on user pages, but not all flags reflect poorly on the user. Some are declined, some are auto-flags caused by other users' behavior,1 some are self-flags (e.g. "I edited; could this be undeleted now?"), and some are neutral. I'd like to be better able to understand the whole picture.

We do have a list of the most recent flags, nicely presented. That's a big help! I'm asking for this table of contents too, because sometimes we need to review more of the history. I hope that you've already done most of the work of design and implementation for other reasons and this addition would not require a huge effort.

1 For example, two other users arguing in comments can cause a "too many comments" flag. Another user leaving the Nth recent rude comment triggers a "too many rude comments" on the last post (because we can't flag users). There are some others.

594
Any way to send a personal message to another user?
908
Show all of my question/answers to me even if they are deleted
410
Decision on rejected edits should be displayed as a notification to the editor
1170
Don't throw away all votes when a user is deleted
191
Allow moderators to reply to a flag
53
Allow moderators to see a summary of flags against a user's comments
294
Add optional box for spam flags letting you say why you think it's spam
404
Can a machine be taught to flag spam automatically?