Definitely not a huge issue, but a little bit jarring on the latest Chrome release under Ubuntu Linux 9.10. Yes, technically still Beta (by Google's standards) but the bug appears to be in WebKit, which is definitely not.

If there's 3 or more digits in the view count, it overflows its box and hits the title of the question in some cases. 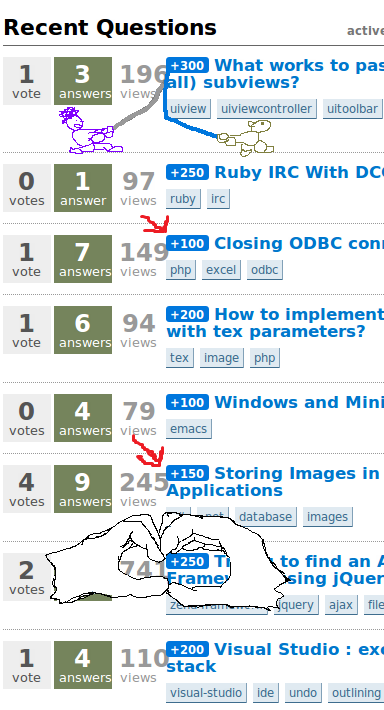 This still happens if I zoom the whole page in/out so it's not like I just have some non-standard font sizes set.

Here's a screenshot of your Linux results (bottom) with Firefox/Windows (top): 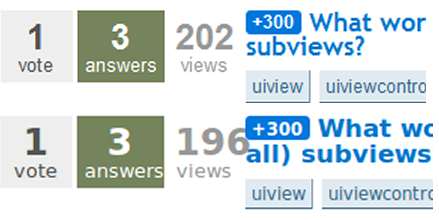 As you can see -- the font being used by the browser is absurdly wide.

This has come up before, but it's really hard to "fix" without changing the font, as the Windows and OSX fonts the browser chooses are fairly similar (if not identical) in width.

EDIT: based on recommendations here I changed it to:

Despite widespread belief to the contrary, a font stack of Arial, Helvetica, sans-serif will not fall back to the default sans serif font on a typical linux box (Ubuntu included). Instead, the Helvetica font gets hijacked and replaced with something the distro thinks is reasonably similar. To find out what font that is, just run 'fc-match helvetica' from the command line. On default configured Ubuntu systems, this will generally be Nimbus Sans L, which does not match Helvetica very well, imho.

So you can either remove Helvetica from your stack (not usually a good option) or you can add an explicit linux replacement, such as Liberation Sans or DejaVu Sans. (Liberation is the better choice metrically and gaining popularity but not as common as DejaVu or Bitstream Vera).

The problem is with the fonts you're specifying in your CSS here and their order (Trebuchet MS, Helvetica, sans-serif).

The browser will go through the fonts in this list and use the first one it knows about. On Windows, Mac OS X, and some Linux installs (those with the Microsoft fonts installed) this will be Trebuchet.

For some odd configurations where Trebuchet is not installed on the machine but Helvetica is, you will get Helvetica. This might happen on some very old, default installs of Mac OS X that did not include Trebuchet (I don't have a box up to check).

On Most default Linux installs, the browser will end up on "sans-serif", which is whatever has been configured as the default sans font in the browser. Since different fonts have different weights for a given point size, this could end up being nearly any width.

There really are two solutions to this. One, change the design to not assume a fixed width for a piece of text -- this would probably require some significant layout changes. The other, specify a fonts list that has fonts of equal or similar weights, in order of preference, where each platform you want to support is guaranteed to have at least one of these fonts installed.

Not the answer you're looking for? Browse other questions tagged bug status-completed google-chrome rendering .

9
These numbers are too crowded! Can we give them some breathing room?
6
Site name cut off in advertisement
4
Red box on election page is at the far end of the page
4
Add button for adding favourite / ignored tag slightly cut off