User is tracking tag badge for non-existing tag with emoji

This user on Meta Stack Overflow is tracking their next tag badge, for a tag that does not exist. It's the dragon emoji: 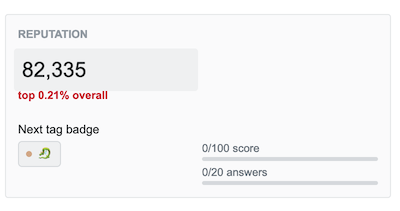 They're doing it on Stack Overflow too. I doubt the tag ever existed; given the user's history it's more likely they've hijacked the call to the server when selecting which tag badge to track.

As answered in the MSO question, at the time they began tracking that nonexistent badge, the system allowed anyone to track any tag badge, regardless of whether the tag existed or not.

Update: It appears that the team has reset the indicator for those who were previously tracking nonexistent badges back when this was allowed.

Not the answer you're looking for? Browse other questions tagged bug status-completed profile-page tag-badges badge-progress .

53
Indicate the color (bronze/silver/gold) in tag badge notifications
755
What are the badges I can earn on each site, and what are the exact criteria for earning each badge?
301
The future of meta.stackoverflow and meta.stackexchange
236
Increase close vote weight for gold tag badge holders
67
Can't track Tag Badges without 20k rep?
4
How is the closest tag badge determined?
10
Don't track tag badges for synonymized tags