Similar questions feature blinds me from seeing my own typing, unexpectedly puts links under my cursor

I like the idea of the Similar questions feature and I've found one suggestion five suggestions helpful so far(!), but there are two three things that interrupt my flow when I am writing a question post.

I write a lot of questions (>3,300), and most of them are involved and require some amount of concentration, so these regular interruptions of thought happen to me several times a day.

Is there some kind of tweak that can make this sudden, unexpected screen shift and eclipse a little less sudden and dramatic, and avoid the obscuration of the line I'm typing on?

The feature itself is important, I'm only asking about an adjustment to improve the user experience. 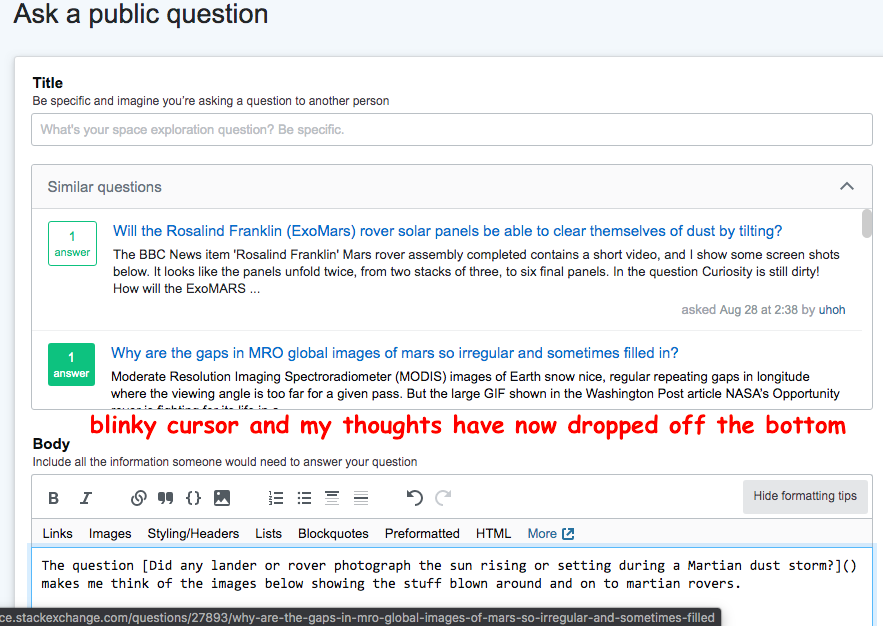 Question: Do Mars rovers protect optical windows during dust storms? Do they “avert their eyes” or do they just “grin and bear it”?

Following this answer (which I had hoped explained the problem but now I see it doesn't) I have discovered that the Similar questions appear without anything being typed into the title bar. The unexpected appearance pushing the active line being typed to the absolute bottom of my screen is real. 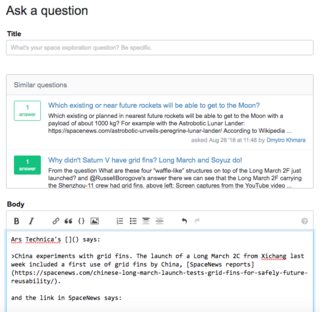 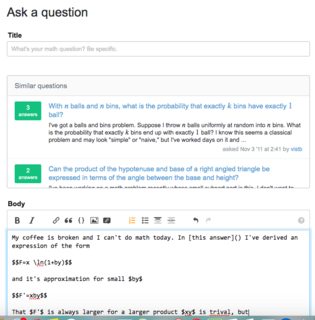 update 2: Happened again on a totally different WiFi location that was performing well (no speed issues) (left) and again with an excellent connection (right). The active line is not eclipsed by the expanded url because I'd only written ~4 lines when the screen-shifting event happened, not enough lines to put the active line quite at the bottom this time. 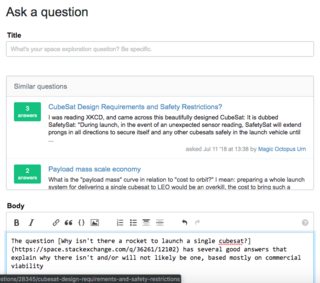 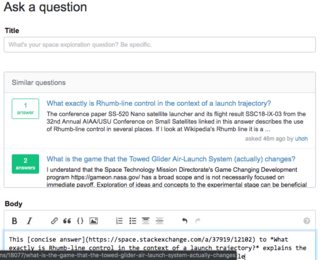 Happens on other (graduated) sites as well: 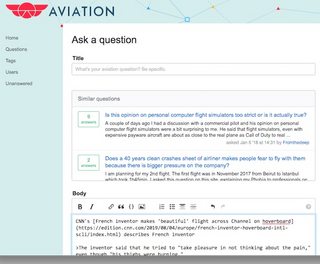 I just ran Chrome from my MacBook Air, running MacOS. I joined the space stack and simply copied the first two paragraphs from your first linked question:

China experiments with grid fins. The launch of a Long March 2C from Xichang last week included a first use of grid fins by China, SpaceNews reports.

Results are no suggested similar questions: 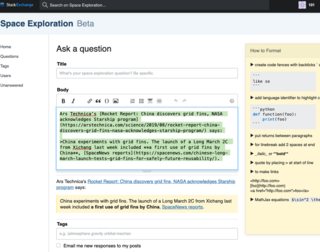 Adding another two paragraphs didn't trigger the search either. The only way for me to get to the suggested similar questions was to enter at least 15 characters into the title bar. Removing the title after the suggestions were loaded didn't remove the suggestions.

First idea that came to my mind (which appears not to be the entire case).

The similar questions are based, and rendered on the title you enter. If you are on a slow connection the return of the search query and building of the list might take a long(er) time and therefore you already start writing your post body.

For me, on fiber optic connection, the similar questions are loaded upon completion, or pausing in writing, of the title.

Not the answer you're looking for? Browse other questions tagged discussion design similar-questions .

20
Confirm post preview for low-rep posts
2
Show “Questions with similar titles” from other sites
12
No UI / exposure for seeing similar questions when asking from iOS app
165
What are the effective communication channels for effecting change to SE?
121
Responsive Design Themes - What can sites customize and how can they get changes implemented?
17
Why do Chemistry and Physics SE use text numbers instead of lining numbers?