What's responsible for the increase in the number of accounts created every week here on Meta Stack Exchange?

I've noticed that since the past year, the number of accounts created on Meta Stack Exchange every week has increased noticeably, and has sustained a much higher rate than it has sustained for the previous years.

Here's a query and a graph: 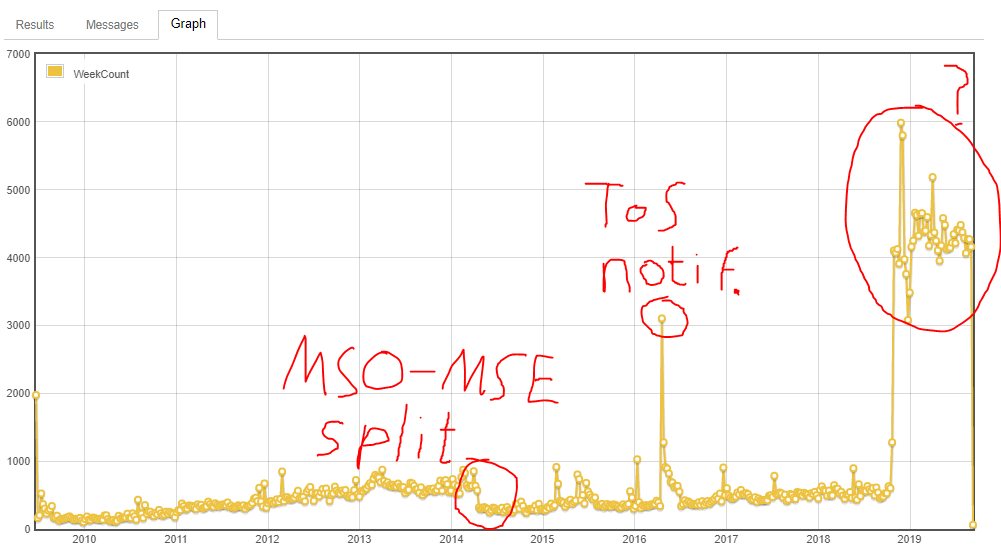 Historically, the rate of account creation has climbed at a steady but slow pace. The rate got shifted down in early 2014, probably due to the Meta Stack Overflow-Meta Stack Exchange split, and there's a small blip increase in early 2016 which was caused by a notification regarding updated Terms of Use that was deployed to all accounts then (a lot of people didn't realize they'd been directed to a different site, and went on to ask their off-topic questions here; this resulted in a temporary period where 2 reputation was required to ask questions here).

However, I can't firmly place anything on the sudden increase that seems to have taken place near the end of 2018, and the fact that it's stayed at that increased rate ever since.

What's responsible for the sudden and sustained increase in account creation here on Meta Stack Exchange? Is there some new external link to this site made after that time?

Or does it has to do with the fact that the login flows for stackexchange.com and Area 51 now go through Meta Stack Exchange? (I don't think it's that, since I don't imagine a lot of people login through those paths, and I don't believe that it creates a Meta Stack Exchange account, only providing a login flow.)

Now, not all of those will end up creating a user here; Area51 is pretty good about just logging you in and sending you back. But SE.com likes to just dump you here. So, a lot of folks end up getting lost and leaving a trail of MSE users behind them.

Not the answer you're looking for? Browse other questions tagged discussion meta user-accounts statistics .

1798
Could we please be a bit nicer to new users?
302
The future of meta.stackoverflow and meta.stackexchange
2777
A Terms of Service update restricting companies that scrape your profile information without your permission
826
Net Neutrality and Stack Overflow / Stack Exchange
205
Support for OpenID ended on July 25, 2018
2426
Firing mods and forced relicensing: is Stack Exchange still interested in cooperating with the community?
2092
Stack Overflow is doing me ongoing harm; it's time to fix it!
1528
Thank you, Shog9
946
Firing Community Managers: Stack Exchange is not interested in cooperating with the community, is it?