Migration bug? Re-migrating a question to the same site didn't create a new question on the destination site

This question was migrated from here to Meta Stack Overflow. The author then voluntarily deleted it there, which marked the migration as "rejected" and reversed all effects of the migration (except the part where it was closed as "off-topic").

The question was then re-migrated to Meta Stack Overflow by a different moderator, but that process didn't create a new question there; it instead re-linked it with the (deleted) original migration. The ending effect is that users who click on the migrated question here are redirected to a voluntarily deleted question on the destination site.

Why doesn't re-migrating a question after it was rejected originally create a new question on the destination site? Why did it re-associate it with the original migration that was rejected?

Screenshot of the revision history: 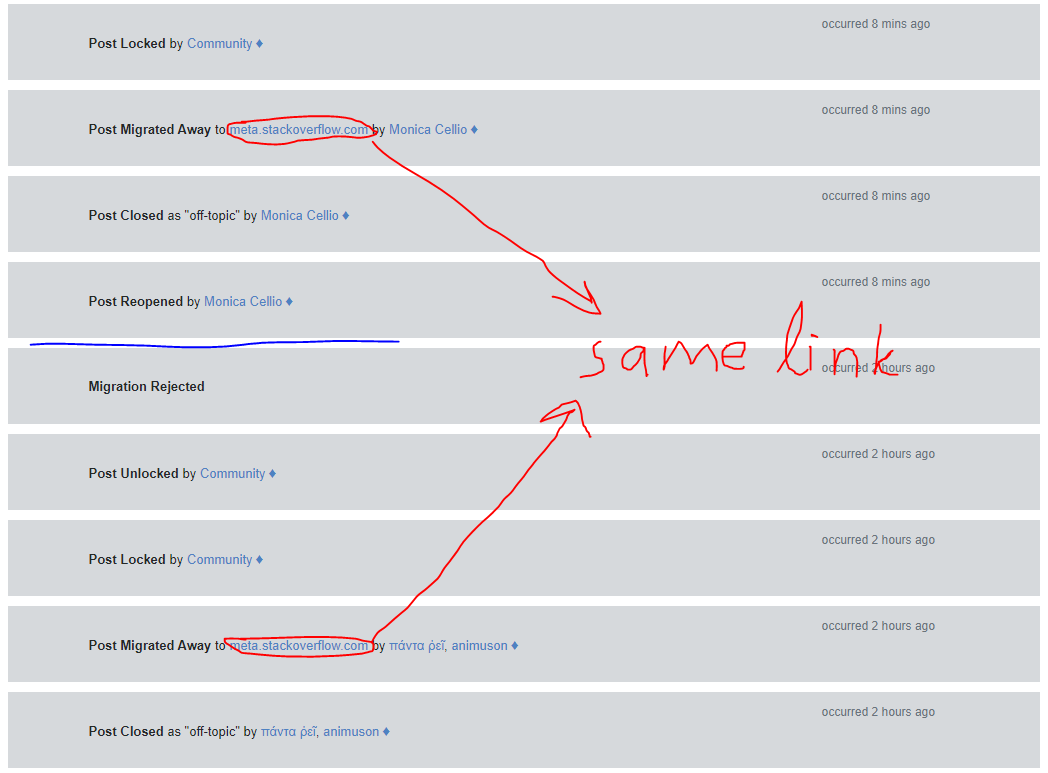 The blue line in the revision history above represents the point in that post's history when the proposed duplicate question was asked; my question is about the items in the history that took place after (above) that blue line.

This is explicitly intentional: there's a check on the destination site - if a question exists with the same source as the new migration, it just returns a link.

I'm changing this to a feature-request to reflect this. Please edit your request as need-be.

Not the answer you're looking for? Browse other questions tagged support moderator-tools migration migration-rejection .

212
What is migration and how does it work?
1
Strange course of actions with migrated and deleted question

620
Formatting Sandbox
60
Require minimum reputation on the target site for migration
256
Reset votes on migrated questions
7
Question migrated to a site shows as migration rejected, even though the question is still open
25
Pipe migrated questions to the review queues of the destination site
42
Are rejected migrations ever automatically deleted from the destination site? Should they be?
181
A proposed philosophy of question migration
45
Don't mark migrations as "rejected" if they were closed long after migration
17
Inform moderators migrating a question if the migration would have been normally blocked, or require selecting an explicit option to bypass the block